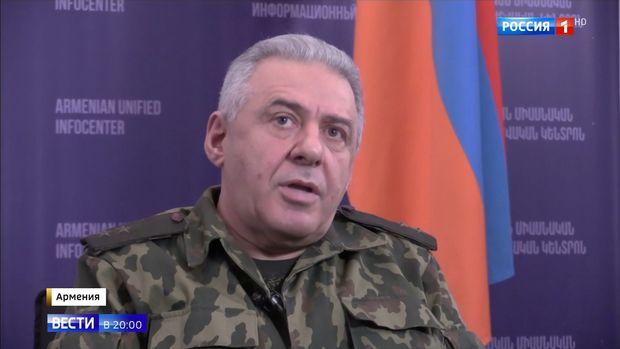 A top Armenian official said that the recent shelling of densely populated areas in Azerbaijan is part of planned tactic of the military-political leadership of Armenia, who, by means of such aggressive actions, grossly violates the norms and principles of international law.

"Now we have developed a tactic of striking artillery. And in the future we will strike at peaceful settlements in order to cause panic..." Vagharshak Harutyunyan said during his speech, which was abruptly interrupted when Russian journalists realized that Nikol Pashinyan's advisor openly confessed to war crimes.

Since the deadly clashes between Armenia and Azerbaijan broke out on September 27, Armenia's forces have continued to shell densely populated areas, strategically important civilian and energy infrastructure, which are far from the frontline. The skirmishes broke out after Armenia's forces deployed in the occupied Azerbaijani lands hit Azerbaijani civilian settlements and military positions along the front zone in the occupied Nagorno-Karabakh region of Azerbaijan.

Armenia's forces have so far launched intensive missile attacks against Azerbaijan’s second-largest city of Ganja, which is more than 60 kilometers away from the conflict zone, the central Azerbaijani city of Mingachevir, which hosts the country's largest hydroelectric power and water reservoir, as well as Barda, Tartar and Beylagan. They also hit the Khizi-Absheron region near Azerbaijan’s capital Baku with mid-range missiles.

Additionally, Armenian forces targeted the Baku-Tbilisi-Ceyhan (BTC) pipeline with a prohibited cluster rocket. The air defense units of Azerbaijan neutralized the missile before it reached the strategically important energy infrastructure, which transports crude oil from Azerbaijan to the markets in Europe.

As a result of Armenia's planned aggression against Azerbaijani civilian settlements, a total of 31 civilians in Azerbaijan have been killed since September 27, while 154 people have been injured, according to the press service of the Prosecutor General's Office. Furthermore, 133 civilian facilities and 928 houses have been seriously damaged.

By terrorizing the civilian population in Azerbaijan, Armenia grossly violates the international humanitarian law, as well as the Geneva Conventions of 1949 and its additional protocols, which has already been recorded in the reports.

Some experts believe that Armenia's leadership is pursuing a plan of dragging Russia into the ongoing heavy fighting under the Collective Security Treaty Organization, or CSTO, as Russian support and military guarantees are critical to Armenia, which hosts a Russian military base near its second-largest city. Launched in 1992, the military bloc operates under a similar premise to that of NATO: an attack on one member state is considered an attack on all others, and each is obliged to support their fellow members.

Russian military expert Igor Korotchenko expressed confidence that by shelling Azerbaijani cities, Yerevan is trying to provoke Baku into tit-for-tat response. If Yerevan can demonstrate that military activities are taking place not only in the territory of the occupied Nagorno-Karabakh region of Azerbaijan, but also in Armenia itself, then it can demand military support from Russia.

"Pashinyan's tactics: To make an attack on Azerbaijani cities, provoke Baku to retaliate against targets in Armenia, and then seek for help from Russia and the CSTO acting as "a victim of aggression," Korotchenko said, commenting on the Armenia's attacks on residential areas of Azerbaijan, according to Armiya.az citing APA.

Over the last twelve days of heavy clashes, Pashinyan has called Russian President Vladimir Putin five times hoping of Russia joining its battle against Azerbaijan in the ongoing fighting. However, President Putin made it clear that although Russia is committed to basic principles of the CSTO, it would not intervene or offer Yerevan military support as the ongoing clashes are not within Armenian territory.

"The fighting, which to our great regret, continues to this day. It is not taking place in the territory of Armenia," Lenta.ru quoted President Putin as saying on Wednesday, addressing the matter.

The intense shelling is being conducted along the line of contact in the occupied Azerbaijani lands, marking the most intense fighting between Armenian and Azerbaijani forces since 1994 when a ceasefire was reached. In order to prevent Armenian military aggression and ensure protection of the civil population, the Azerbaijani Army took counter-attack measures to repel the assault.

In retaliation, Azerbaijani troops have so far liberated the city of Jabrayil and more than twenty villages in the districts of Jabrayil, Fuzuli and Tartar from Armenia’s occupation.