One Village In Azerbaijan Stands Out As a Beacon Of Hope 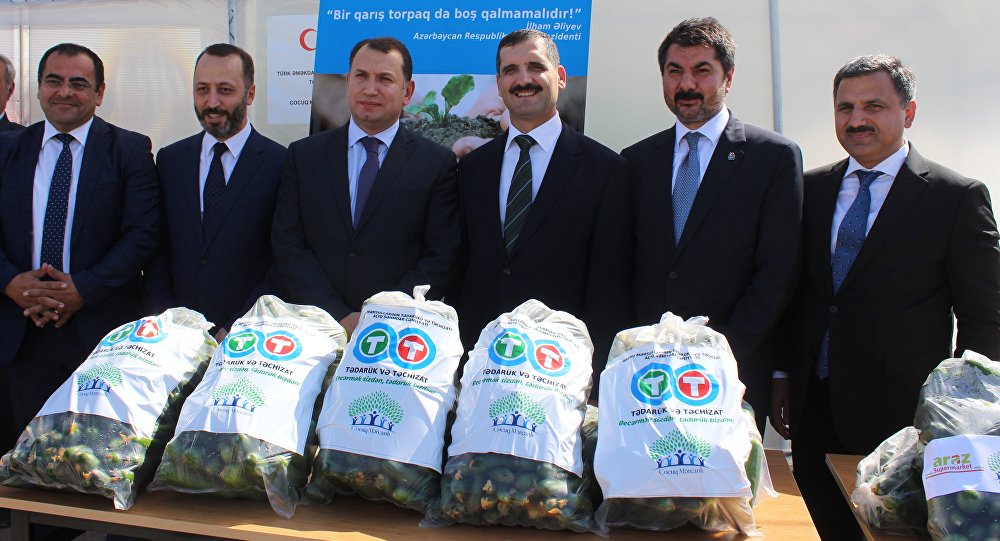 Representatives of the Economy Ministry of Azerbaijan and the Turkish Embassy in Azerbaijan introduce the products manufactured in the village of Jojug Marjanly, October 3, 2018 / Economy.Gov.Az

In a war-torn corner of the South Caucasus, nestled in Azerbaijan’s Jabrayil region, lies Jojug Marjanly village – a community experiencing a revival in an area where there has been little hope for decades. Farmers are back in business and selling their products, which are both a source of income and local, even national, pride.

"The activities that are carried outplay an important role in the development of the Jabrayil region, [as well as] in resolving the issue of employment of the villagers,” Azerbaijan’s Deputy Economy Minister Sahib Mammadov said at a ceremony last Wednesday to help farmers restart their businesses, according to Sputnik.

“The products produced in the newly established farms will be marketed under the Cocuq Mərcanlı [Jojug Marjanly] logo,” the minister said. By labeling their goods, locals take pride in what was once a dormant industry and is now just starting to come back to life.

Fifteen greenhouses and 15 beekeeping farms in the village are providing the raw materials for packaged goods, such as packed cucumbers and jarred honey, which is being shipped to markets and grocery stores across Azerbaijan. The efforts to jump-start the economy in a village that has seen little economic success in over two decades have been sponsored by the Ministry of Economy of Azerbaijan and the Turkish Embassy in Baku. State-owned companies and private firms in Azerbaijan have been encouraged to help facilitate the delivery and promotion of new products as well.

Jojug Marjanly’s farmers once relied on agriculture as the economic lifeline for the small community, but that all ended 25 years ago when war broke out and neighboring Armenia occupied Azerbaijani territories, which includes the Nagorno-Karabakh region and seven surrounding districts. Nagorno-Karabakh region is the epicenter of what is sometimes referred to as a ‘long-lasting conflict' that can burst into a full-scale war anytime similar to what happened in April 2016 being the most heated resumption of battles since the 1994 ceasefire deal.

The war in Nagorno-Karabakh saw twenty percent of Azerbaijan’s historical and internationally recognized territories, including the Nagorno-Karabakh region itself and seven adjacent districts - Lachin, Kalbajar, Agdam, Fuzuli, Jabrayil, Qubadli, and Zangilan, occupied by Armenia. Jojug Marjanly village is located within the Jabrayil district, but today no longer suffers the same fate as the others, which are all still under occupation, despite four UN Security Council resolutions demanding that Armenia pull back all forces from occupied lands.

Nestled deep inside the Araz River valley along Azerbaijan's border with Iran, Jojug Marjanly village has become the starting point of the return of Azerbaijanis to Karabakh region after decades of occupation by the Armenian military. According to data from the United Nations, around 860,000 people were forced to flee occupied territories, due to a war that began in 1991 but for which flames began to kindle as early as 1988. Today, more than a million Azerbaijanis live as refugees and internally displaced persons (IDPs) in refugee settlements and camps scattered throughout the country.

Jojug Marjanly village fell under the occupation of Armenia in 1993, and the village was recaptured by Azerbaijani soldiers in 1994 during a military operation known as Horadiz. However, the resettlement of IDPs to the village was a nearly impossible mission due to the Armenian military’s deployment atop hills surrounding the village.

But the Four Day War, or “April War,” was the turning point. From April 1-4 in 2016, Azerbaijani troops launched a retaliatory strike to push Armenian forces back, which resulted in regaining about 20 square kilometers of occupied land. The liberation of Lalatapa hill, and the subsequent establishment of a military outpost there has removed Jojug Marjanli from the crosshairs of Armenia’s military and put the village under the protection of Azerbaijani forces. The events of the Four Day War are significant, as they shifted the lines of control for the first time since 1994.

Azerbaijan’s President Ilham Aliyev dubbed the recapture of Jojug Marjanly as a symbol of revival for the people of Azerbaijan, ordering reconstruction and economic revival projects to help the community get back on its feet. A two-phase revival campaign saw over 100 IDP families return to their native lands, where the government spared no effort to rebuild the village’s infrastructure as well as residential houses, a school, hospital, and a kindergarten.