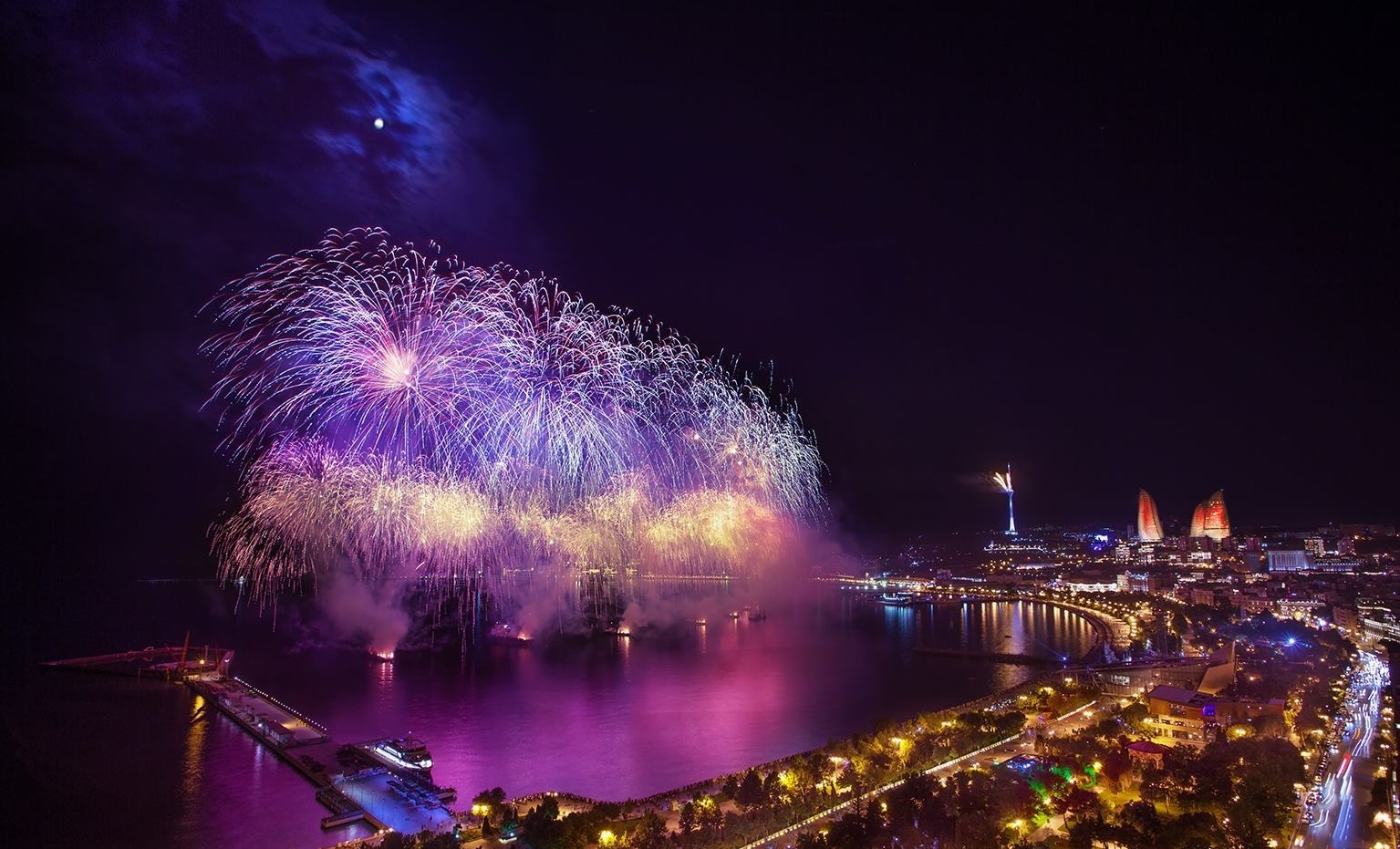 Firework show harbingers about ringing in New Year in Azerbaijan, a ten million country on the shores of Caspian Sea / ONN Media

Each new year is celebrated with fireworks and celebrations around the world and the Caspian region is not an exception. But fireworks are not the only festive activity that worth taking part in — hundreds of attractions can be found across the four countries before, during and after New Year's Eve.

If you happen to be in the Caspian region this New Year’s, check out these hot spots for some fun and local hospitality!

Baku — a megalopolis on the Caspian Sea shores — is undoubtedly the epicenter of the New Year celebrations in Azerbaijan. This year’s celebration will again feature a grandiose firework display to mark Azerbaijan’s ten million population’s ringing in a new year, as well as Azerbaijan’s Solidarity Day.

The festive atmosphere can be experienced mostly along the iconic Nizami Street, which is also known with its Soviet-era name, Torgovaya. Small, colorful, and cozy boutiques of the “Warm Heart, Cold Hands” charity fair stationed along Fountains Square offers a real fun for gourmets, technology fans, bookworms, and those who are thrilled with the music, dance, and making new friends. A breathtaking show of balls of fire blasting and shining over the waters of the Caspian Sea can be witnessed in Highland Park, the highest point in the city, and at the Seaside Boulevard that stretches for 16 kilometers ashore the world’s largest landlocked sea. The newly opened Love Park also worth visiting. Now in its festive design, it resembles a fairytale town with tens of illustrated compositions.

If you want to see a unique reflection of Baku — a handmade gingerbread maquette — come to the Port Baku Mall. A miniature “Gingerbread City” made from gingerbread and icing features mini versions of Baku’s must-see attractions, such as the Heydar Aliyev Center, the Gosha Gala (Twin Castle) Gates, the Flame Towers, Maiden Tower, Baku Ferris Wheel, Baku TV Tower, and the Carpet Museum.

Russia is probably a classic to celebrate New Year’s Eve with its festive parties and mouthwatering treats. Moscow’s legendary landmark, Red Square turns into one huge celebration along with hundreds of bars, restaurants, and clubs that offer parties and specials. Thousands of locals and foreigners head to the capital’s main sight to celebrate the New Year and enjoy the fireworks display set off at midnight. “S Novym Godom!” — that’s what you will hear first and foremost as Kremlin clock strikes 12 o’clock and heralds in a new decade. This means “Happy New Year!,” in case you want to blend in.

Russians will celebrate New Year throughout eight days, starting from January 1. When it comes to New Year celebrations in Russia, the possibilities are really endless. This year, Moscow has put on some pretty fantastic events for both locals and guests in VDNKh park. Different performances and shows, exhibitions, master classes and much more to delight Muscovites and visitors. A concert that is scheduled for December 31 will feature colorful performances of the most popular singers. You can also enjoy the largest artificial ice skating rink in Europe that has been set up for leisurely enjoyment.

If you happen to visit Russia during New Year celebrations, try not to miss a unique chance to celebrate the “Old New Year” as well. Although it may sound strange to foreigners, celebrating the Old New Year makes complete sense to Russians, who love to mark the beginning of a new year on the night of January 13, keeping in accordance with the old Julian calendar.

In case you didn’t know — the capital city was renamed this year to honor the country’s first president, so if you want to celebrate New Year in Kazakh style, come to Nur-Sultan!

Although New Years is a family holiday in Kazakhstan, there will be a series of outdoor activities in the capital city, including a grandiose fireworks display. Actually, this year, three fireworks shows will be held simultaneously at midnight — one can be seen along the embankment of the River Ishim, the second one in the Botanical Garden, while the last one — near the Pushkin Street.

This year, there will be no festive concert in Nur-Sultan, but ice towns with holiday trees and ice skating rinks will work — of course, you can visit them any day. The important site of the country appears on the territory of the world exhibition, EXPO, which brought millions of visitors to the capital city in 2017. This place will feature an ice skating rink and the country’s largest Christmas tree. To decorate the tree, thousands of balls, hundreds of meters of lights and lots of tinsel were used. In addition, ice sculptures and an ice skating rink are in front of City Hall for visitors’ enjoyment.

Meanwhile, if you want to spend holidays out of the city, then the small village of Chundzha, located roughly 250 km (155 mi) east of Almaty, Kazakhstan’s former capital, is worth a trip. This place is known for its hot springs, best enjoyed in cold winter months. Due to geological pressure and volcanic forces, the waters heat up to 50 °C (122 °F).

Ashgabat is keeping up the pace with its neighbors as the city is now fully ready to welcome tourists from all over the world. This year’s festive program includes a series of music concerts featuring foreign and local pop stars, as well as folk artists. In addition, those visiting the capital can enjoy vocal and choreographic performances highlighting folklore plots and motifs, as well as ancient lyrical and modern songs.

If you’re in the Turkmen capital city, enjoy the decorated streets with hanging posters, figures of Santa Claus and rats, as according to the Chinese astrology, 2020 will be the year of the Metal Rat. At the same time, Elegant New Year trees, sparkling with colorful toys and lights, give the white marbled city tremendous and unique beauty.

When in Ashgabat, head to the square located next to the Alem entertainment center to enjoy the festive display while it is still up, including a huge decorated tree. Snow is a rare guest in the city, but thanks to the decorators, the city center has turned into a fabulous small winter town. There are shining stars, colorful garlands and other decorations.