“Never Forget”: How The Caspian Region Helped The U.S. After 9/11 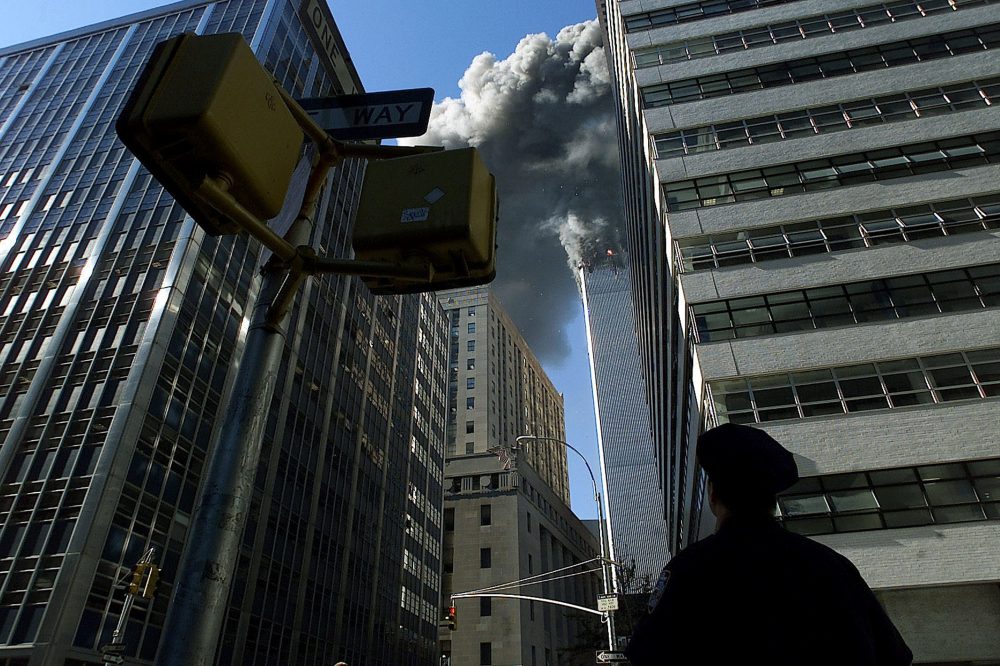 A view of the burning World Trade Center towers from Park Place Street and West Broadway Avenue during the terrorist attacks on September 11, 2001 / Jose Jimenez/Primera Hora / via Getty Images

Today marks 17 years since the United States was terrorized by Al Qaeda in the form of multiple attacks using commercial airplanes that killed over 3,000 people. The world watched in horror as the Twin Towers in Manhattan fell, and citizens in the Caspian region were no exception.

“I was watching on TV one of the bloodiest acts of global terrorism,” Vilayat Guliyev, who served as Azerbaijan’s Foreign Minister in 2001, told Caspian News while recalling the 9/11 events. “I watched repeatedly how planes crashed into Twin Towers and the buildings collapsed burying hundreds of people under debris."

"I thought that we should react in any way to this global act of terrorism,” Guliyev said. “President Heydar Aliyev summoned an emergency meeting of the Security Council.”

On September 12, 2001, Azerbaijan’s President Heydar Aliyev issued an official statement condemning the 9/11 attacks and convey Azerbaijan’s solidarity with the American people. President Heydar Aliyev, on the same day, sat for talks with the U.S. Ambassador to Baku, and offered assistance in tracking down the culprits. Azerbaijan opened its airspace to the U.S. Air Force and assured its agencies would cooperate and provide information that would assist in American-led efforts.

“President Heydar Aliyev was the first leader of a Muslim country and Azerbaijan was the first Muslim state to condemn the deadliest 9/11 terror attacks,” Guliyev told Caspian News.

“This put Azerbaijan under a spotlight in the U.S. media and also helped direct international community’s attention to terrorist acts against our country.” Although Azerbaijan is constitutionally secular, the majority of its population is Muslim.

Bush subsequently announced an international military campaign against terrorism, focusing on Afghanistan and the Taliban, which had been providing safe-haven to Al Qaeda mastermind Osama bin Laden.

“Azerbaijan itself started supporting the International Security Assistance Force (ISAF) operation and contributed to anti-terror campaigns in Afghanistan and other parts of the world,” a spokesperson to the Foreign Ministry of Azerbaijan told Caspian News, referring to the NATO-led security mission in Afghanistan that had been established by the United Nations Security Council in December 2001.

ISAF’s main purpose was to train the Afghan National Security Forces and assist in rebuilding key government institutions. The coalition was dissolved in 2014, when the mission morphed into “Resolute Support” – a new, smaller non-combat mission launched on January 1, 2015.

Alongside Azerbaijan’s President Heydar Aliyev, Russian President Vladimir Putin was one of the first heads of state to deliver a support message and condolences to then-U.S. President George W. Bush.

“Russia knows what terrorism means,” Putin told Bush, according to reports. “And because of this we, more than anyone, understand the feelings of the American people. In the name of Russia, I want to say to the American people - we are with you.”

"After the September 11 attacks, the Russian government led by Vladimir Putin for half a year already at that time, have perceived the U.S. grief as their own,” the director of the International Institute of the Newly Established States, Alexey Martynov, told Caspian News.

“Before the 9/11 attacks, Russia had encountered terrorist acts in an international scale in the North Caucasus, therefore, September’s attacks in New York was understandable and close to us.”

On September 24, 2001, the Russian government offered a five-point plan in support of the Global War on Terror, abbreviated “GWOT” and proclaimed by Bush on September 20. Russia’s plan included providing humanitarian assistance, opening airspace to the U.S., and sharing intelligence, participation in international search and rescue efforts.

“We all wanted to help when the terror attacks have happened. President Putin opened all secret channels to assist the U.S. intelligence agencies in the search and capture of those responsible for this horrible crime against innocent people,” added Martynov.

“At the time, Russia considered the U.S. an ally similar to the time of the Second World War, when the countries united to defeat the common enemy,” he said. “Unfortunately, our simple-minded illusions quickly disappeared in a few years. In 2007, or just six years later, Putin made his Munich speech that was dubbed the start of a new Cold War.”

“Today, Russia remains the main center of the fight against international terrorism. Unfortunately, the U.S. has not drawn conclusions of the September’s attacks. They have not realized that the only way to defeat an international terrorism is a unite actions with allies against terrorists but not the flirting with them,” Martynov said.

Russia has suffered from multiple terrorist attacks since the start of the 21st century, actively supports the UNSC Counter-Terrorism Committee, and plays one of the leading roles in international counter-terrorism cooperation within the UN and the Commonwealth of Independent States’ Anti-Terrorism Center.

“To date, Russia has got one of the most effective systems that were developed in order to struggle with terrorism, as well as protect its citizens from terrorist threats,” Martynov explained.

After the 9/11 attacks, the U.S. began to actively strengthen its military presence in Afghanistan and this geopolitical move directly or indirectly began to influence the situation in the neighboring Caspian country of Kazakhstan.

“At that time, Kazakhstan was the only Central Asian state to actively support military-political cooperation with the U.S. and the only country in the region where the United States was heavily presented economically,” Dosym Satpayev, a Kazakhstani political analyst and director at the Almaty-based Risk Assessment Group, told Caspian News.

After the 9/11 attacks, Kazakhstan and the U.S. signed a Memorandum of Understanding to support the U.S.-led Operation Enduring Freedom in Afghanistan. Kazakhstan subsequently allowed the U.S. to fly over its airspace using air corridors and provided air navigation services.

“Kazakhstan actively supported the United States in its fight against terrorism in 2001 and now supports the great work being done in Afghanistan. To confront a new hotbed of terrorism is the task of all of us, the neighbors of Afghanistan,” Nazarbayev said earlier this year following a meeting with U.S. President Donald Trump.

Kazakhstan is no stranger to terrorism. In June of 2016, three attacks were launched in Kazakhstan’s northwestern city of Aktobe. Altogether, the shootings resulted in seven deaths and 37 more injured. Eighteen attackers were killed and nine were arrested.

But not all relationships between Caspian countries and Washington have been positive since 2001.

A judgment issued by a U.S. district court in New York in March 2016 demanded that the Iranian government pay more than $10.5 billion in damages to families of people killed on 9/11 and to a group of insurers.

Iranian Foreign Ministry spokesman Hossein Jaberi Ansari had, at the time, described the court ruling as “unjust,” “ridiculous” and “absurd.”

The class-action lawsuit against Iran was filed in 2004 by families of over 1,000 victims of the attacks. It accused Iran, the Islamic Revolutionary Guard Corps, and the Central Bank of the Islamic Republic of Iran for aiding the hijackers of the airplanes used on 9/11.

According to the 9/11 Commission Report, some attackers moved through Iran and did not have their passports stamped.

“Our government agreed not to stamp the passports of some of them (when they passed through Iran on trips between Afghanistan and Saudi Arabia) because they were on transit flights for two hours, and they were resuming their flights without having their passports stamped,” said Mohammad Javad Larijani, the head of Iran’s High Council for Human Right in the Iranian judiciary in an interview with the Iranian state TV broadcast on May 30 of this year. “However their movements were under the complete supervision of the Iranian intelligence."