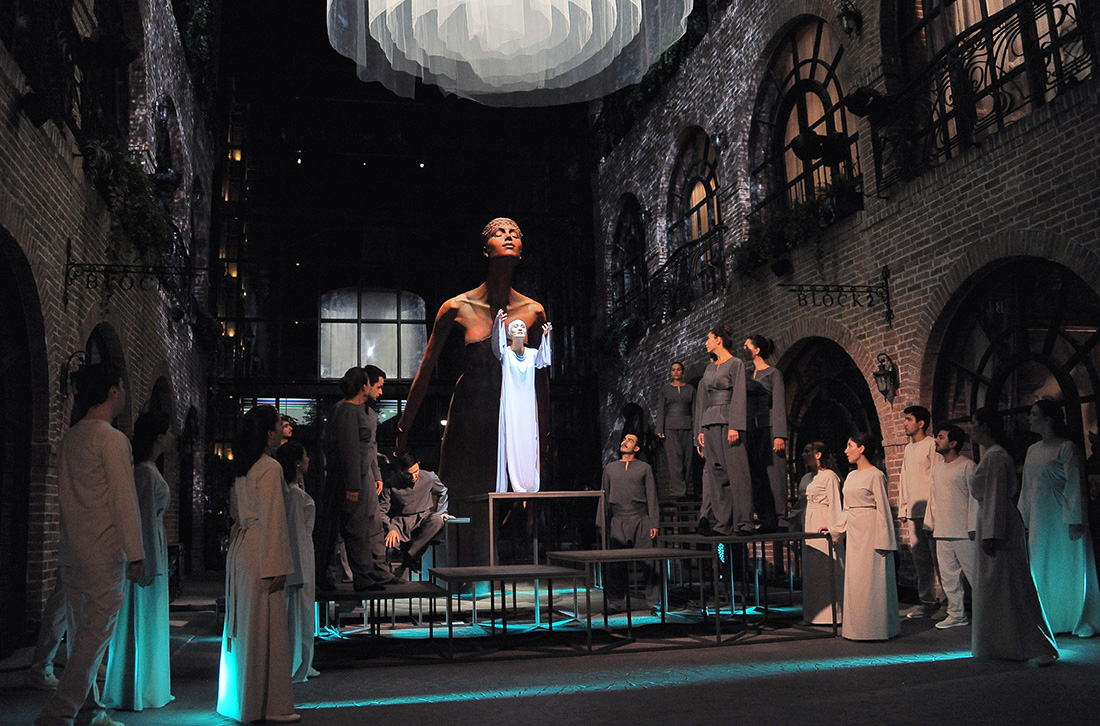 An episode from one of the events held within the Nasimi Festival of Poetry, Art, and Spirituality in Baku, September 30, 2019 / Nasimifestival.Live

The main cultural extravaganza of this year in Azerbaijan, the Nasimi Festival of Poetry, Art, and Spirituality wrapped up on Tuesday with a grandiose gala show that featured orchestral concerts and individual performances by prominent authors from across the world.

Heydar Aliyev Foundation and the Ministry of Culture, the main hosts of the four-day festival which kicked off on September 28, organized the closing ceremony at the Heydar Aliyev Center, where the heritage of Azerbaijan’s great poet and thinker Nasimi was put under a spotlight through different improvisations of his poetry. Musicians from Turkey, Jordan, Iran, Israel, Morocco, and the United States took the stage to deliver their appreciation of Nasimi's legacy in their own way. Famous American jazz pianist and composer Dan Tepfer and the world-renowned Jewish rock band Dudu Tassa & the Kuwaitis were among the performers of the gala show.

One of the key parts of the jamboree’s show was reviving Nasimi’s images of his different ages and sounding couplets from his different poems by the actors. The universality of the poetic world of the Azerbaijani poet was demonstrated as the testimony to his soul’s time travel to our days.

Ali ibn Seyid Muhammad, better known by his pen name Nasimi, was a famous poet born in the Azerbaijani city of Shamakhi in 1369. He is considered one of the greatest poets and philosophers of Azerbaijan, having written works in Azerbaijani, Persian, and Arabic. Nasimi died in Aleppo, Syria in 1417.

Nasimi drew inspiration from a doctrine of the Sufi Islamic tradition known as Hurufism, which identifies the universe as eternal, and accepted prophets as the disseminators of religions. Hurufism considered man as a supreme copy of the divine and the key to haqiqa, or “truth.” The poet promoted in his works the concept of free will and a principle of universal love and tolerance, looking above the boundaries of man’s imagination and seeking the image of God hidden in every single human being. Nasimi’s ideology, however, was ignored by theologians of his time as blasphemy, as they considered unacceptable the idea of deifying human beings. His isolation by religious circles led to his execution in Aleppo, where he was skinned alive on the orders of the Turkic warlord and the founder of the Timurid Empire, Amir Timur.

The Nasimi Festival of Poetry, Art and Spirituality in Baku was the second of its kind after the first edition held in 2018. The recent festival also commemorated the 650th anniversary of Nasimi’s birth.

Meanwhile, the Azerbaijan-born British singer and composer Sami Yusuf was awarded the Honorary Diploma of the President of Azerbaijan for his contributions toward raising awareness about Nasimi’s legacy. Prior to the festival, Sami Yusuf introduced his song, the lyrics of which he derived from one of the most popular ghazals of Nasimi, the Sığmazam ("I don’t fit in") ghazal.

To raise awareness about the role of the heritage of Nasimi, whose works are announced the state assets of Azerbaijan, President Ilham Aliyev declared the year of 2019 as the “Nasimi Year”. UNESCO celebrated the 600th anniversary of the poet’s birth at its headquarters in Paris in 1973 and arranged the same commemoration ceremony for his death’s 600th year, in 2017.

A metro station, a street and a district in Azerbaijan’s capital city Baku bear the name of Nasimi. His bust was unveiled in the Moscow International Relations Institute, while monuments to the poet have been erected in Baku, Shamakhi, Khachmaz, and other cities of Azerbaijan, as well as in Ukraine’s capital city, Kyiv.