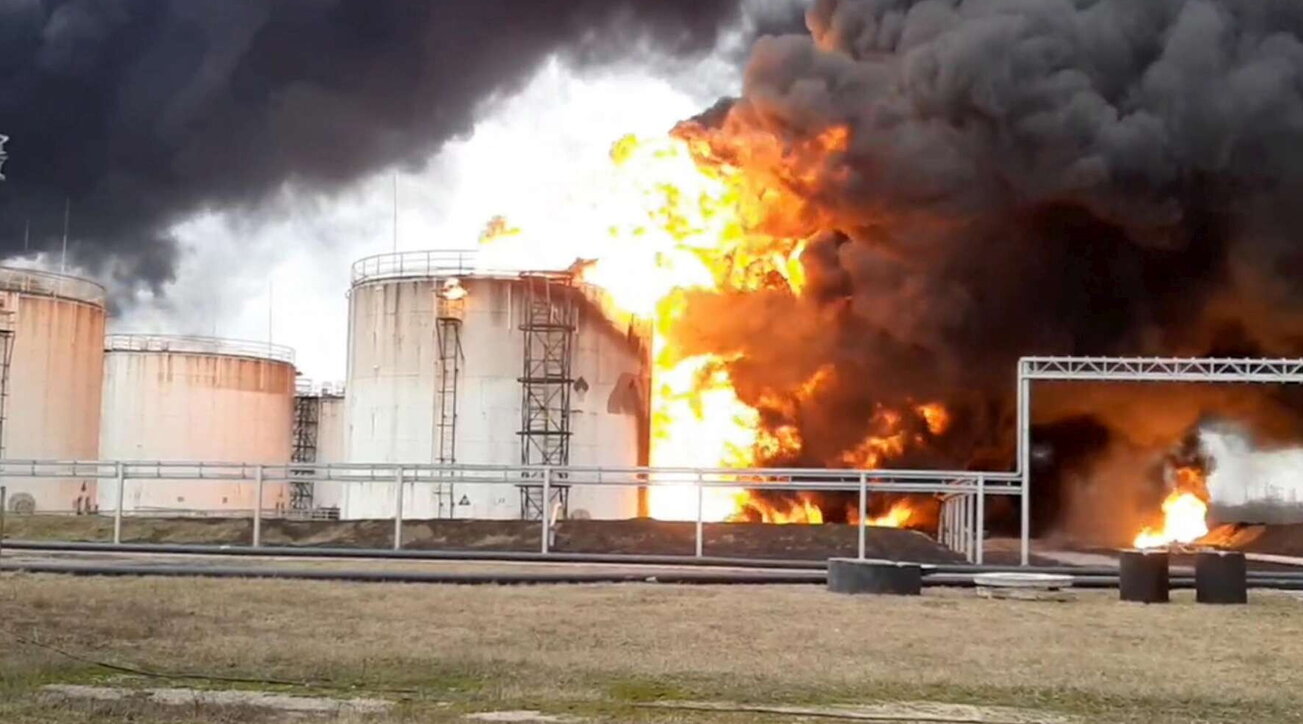 The Belgorod region — which connects Moscow to Ukraine’s second-largest city, Kharkiv — serves as a logistics hub for fuel supplies that have powered Russia’s war effort in Ukraine.

Russia’s defense ministry has blamed Ukraine for striking a fuel depot in Belgorod, which is about 35 km (22 miles) north of the Ukraine-Russia border.

Speaking at a briefing on Friday, defense ministry spokesperson Igor Konashenkov said that two Ukrainian Mi-24 military helicopters entered Russian airspace on Friday at 5 a.m. Moscow time at an extremely low altitude and “launched a missile attack on a civilian oil storage facility located on the outskirts of Belgorod.”

The alleged attack destroyed several oil tanks at the Belgorod site, he added.

What could be the first counter-attack by Ukraine on Russian soil set 16,000 cubic meters (3.52 million gallons) of fuel on fire, comprising eight tanks with 2,000 cubic meters of fuel each. Two employees were injured in the fire at the depot, which is run by Russian energy giant Rosneft. According to Belgorod's regional governor, Vyacheslav Gladkov, residents in the vicinity of the depot were being evacuated but there was no further threat to the population of the city.

The Belgorod region — which connects Moscow to Ukraine’s second-largest city, Kharkiv — serves as a logistics hub for fuel supplies that have powered Russia’s war effort in Ukraine.

However, Ukraine has neither confirmed nor denied the attack.

Commenting on the alleged attack, Kremlin spokesman Dmitry Peskov made it clear that the incident could “hamper” ongoing peace talks between Russia and Ukraine.

“Of course, it does not create conditions comfortable for the continuation of negotiations between Russia and Ukraine,” TASS quoted Peskov as saying on Friday.

The incident occurred amid ongoing fighting between Moscow and Kyiv that began when Russia’s troops invaded Ukraine on February 24. Russian President Vladimir Putin claimed that the “special military operation” was aimed at protecting the people of two self-proclaimed separatist-controlled regions of Ukraine allegedly being attacked by the Ukrainian military. However, the Russian advance has made slower progress than most military analysts had expected, mostly due to fierce Ukrainian resistance.

Since the war began, Russian and Ukrainian delegates have held six rounds of talks aimed at ending the fighting, which has already been dubbed as the biggest assault on a European state since World War II. After the latest round of Russia-Ukraine talks held in Istanbul on March 29, negotiators expressed some optimism after Russia pledged to pull its troops back from Ukraine’s capital of Kyiv and the northern city of Chernihiv. On its part, Ukraine vowed to not join military alliances such as NATO — a key Russian demand. The written proposals handed to the Russian side also stipulate that Ukraine will not allow foreign military bases, contingents, or hold military exercises on Ukrainian territory without the consent of guarantor states, including Russia.

Ukraine had long been trying to join NATO in hopes of gaining protection against Russia. The Kremlin, however, has repeatedly claimed that Ukrainian membership in the Western military alliance would be dangerous for Russia.