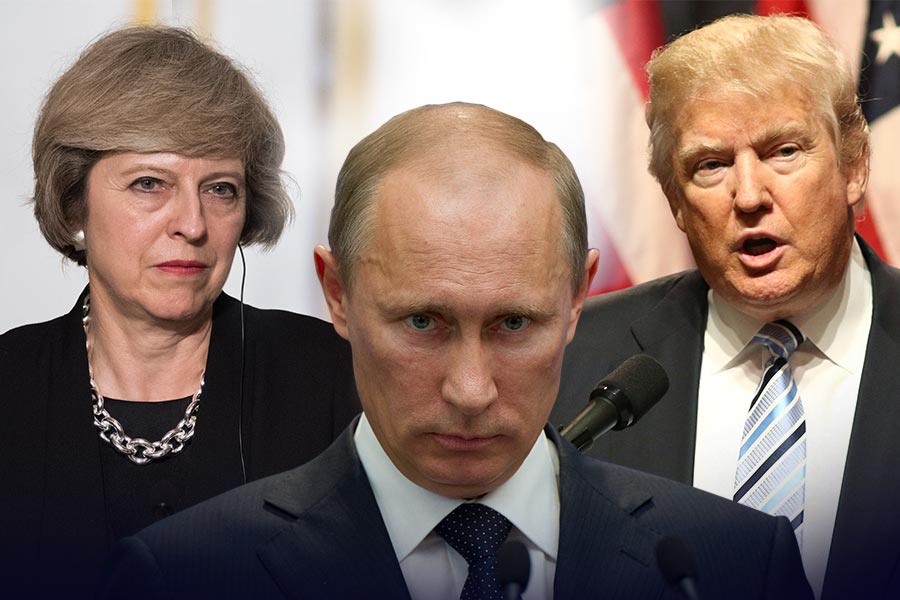 The U.S. demonstrated its special relationship with Great Britain on Monday when the Trump administration, along with European Union countries, Ukraine and Canada announced they would expel more than 130 Russian diplomats in a coordinated response to the poisoning of a former Russian spy and his daughter on British soil on March 4.

The Russian Foreign Ministry swiftly condemned the expulsions in a statement, and decisively protested at the move.

“We consider this step to be unfriendly and out of line with the objectives and interests of establishing the causes and finding those guilty of the incident which took place in Salisbury on 4 March this year,” read a statement put out by the Russian Foreign Ministry on March 26.

“The provocative gesture of much-vaunted solidarity with London that was made by the countries who have blindly followed the U.K. in the so-called Skripal case, without having bothered to clarify the circumstances of what happened, is a continuation of the confrontational line aimed at escalating the situation.”

On March 14 British authorities announced that they would kick out 23 Russian diplomats for the poisoning of Sergei Skripal, a former Russian military intelligence agency official, and his daughter Yulia, in Salisbury. At the time British Prime Minister Theresa May called for a concerted action against the Kremlin.

By Monday, Britain’s allies spoke loudly and sent a clear message to Moscow.

The President of the European Council Donald Tusk said 14 EU states had decided to expel Russian diplomats as a direct result of a meeting held last week about the Salisbury poisoning.

"Additional measures, including further expulsions within this common EU framework, are not to be excluded in the coming days and weeks," Tusk said.

Having denied all allegations since the story broke earlier this month, Kremlin spokesman Dmitry Peskov continued with Moscow’s push-back, vowing that Russian officials will respond in kind to the decision to boot out Russian diplomats.

"We are very regretful that these decisions have been taken. The so-called Skripal case has been put forward as the reason. We have already stated and, once again, repeat, that Russia did not and does not have anything to do with this matter. Of course, as before, we will be guided by the principle of reciprocity," Peskov told reporters, according to state-run TASS news agency.

The Russian presidential spokesman said that before responding to the decisions to expel Russian diplomats, the Kremlin will have to review the foreign ministry’s recommendations. This will be analyzed mainly by the diplomatic department, after which the president will be presented with proposals for retaliatory steps. The final decision will be made by the Russian president, Peskov said.

“The main task that has been set is the demonization of Russia and what we see at the moment is of course the continuation of this complex and long-term program of this rabid Russophobia in action,” she said.

Zakharova added that Russia would retaliate.

"From all that has been said by the foreign ministry today, from all that we have seen, there will certainly be a response. Towards each country appropriate measures will be taken in relation to the expulsion of diplomats and the closure of the Russian general consulate in the USA, specifically in Seattle, RT reported Zakharova as saying.

In the meantime, a leading Russian parliamentarian gave an angry reaction to the decision by the U.S., Canada and European countries to follow Britain's lead in kicking out Russian diplomats, saying it's essentially an unprecedented level of anti-Russian collusion.

“This is a link in a chain of provocation against the Russian Federation, which simply blows up the whole system of international law," said Leonid Slutsky, Chairman of the foreign affairs committee of the State Duma, said according to RIA.

“I believe that these decisions, which were taken from a misunderstood feeling of solidarity with U.K.’s position, will not help normalize the overall situation on our continent, and will undoubtedly create problems in terms of our relations with all the countries who took this decision,” Chizhov said.