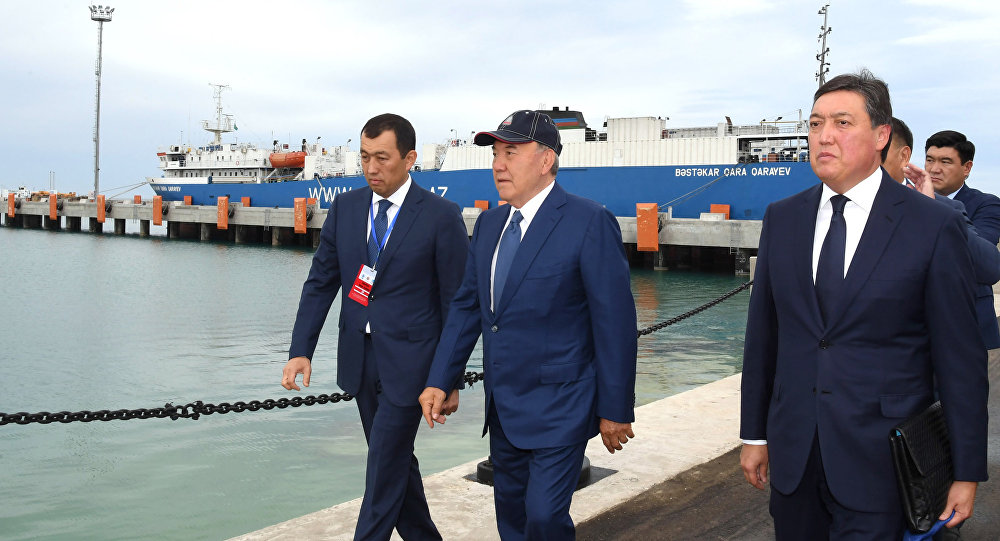 “We have completed the second stage of the multimodal hub, the Kuryk port. This project is important not only for our country but for the whole of Eurasia, especially for neighboring, fraternal states,” Nazarbayev said on August 11, as he gestured for the first cargo train to travel from the Khorgos Eastern Gate Special Economic Zone, located on the border with China.

“This is a historic project that will increase the transit potential of the whole region,” he said, mentioning that the port of Kuryk will allow goods to reach European countries through Turkey and the Mediterranean Sea.

The port of Kuryk is on the eastern coast of the Caspian Sea, about 68 kilometers (42 miles) south of Aktau city and nearly 100 kilometers (62 miles) south of Kazakhstan’s first marine port known as the Aktau Seaport. Inaugurated in 2016, the port of Kuryk is still under construction. Once completed, it will be able to transport more than seven million tons of cargo per year, while the service infrastructure with the customs service area of the port will handle vehicles for no more than 30-40 minutes.

The port occupies 40 hectares (98 acres) and is the first of its kind built since Kazakhstan gained independence from the USSR in 1991. Specialists from Russia and Azerbaijan have helped design the port, after having constructed the Baku International Sea Trade Port.

The port in Baku, located across the Caspian Sea on its western shore, is being built in three phases. The first phase of construction is expected to be completed by the end of this year. Located in the Alat trade and industrial area and just 43 miles south of Azerbaijan’s capital city, the port is expected to transport up to 15 million tons of cargo and 100,000 containers to start.

While constructing the Kazakhstani port in Kuryk, designers had considered features included in the Azerbaijani port across the sea, both which are expected to form part of the renewed Silk Road transit corridor between China and Europe.

Located in Central Asia, south of Russia and west of China, Kazakhstan’s geographical position means it has the potential to become a regional transportation hub between east and west. As the largest country in the region it stands at the crossroads of the major sea, rail and land routes within Eurasia, including the Trans-Caspian International Transport Route (TITR) and China’s Belt and Road initiative.

“Kazakhstan has a huge territory, the ninth in the world, and transportation links are of great importance for us to trade with neighbors. Merging with the intercontinental Eurasian transport system is a strategic task for our country, and I am sure it helps all our neighbors,” Nazarbayev said on Saturday.

Kuryk port’s modern infrastructure will be able to provide efficient cargo delivery from China, Central Asia and the Ural-Siberian region of Russia, to Turkey and Europe and back. Officials in Astana say that the port will earn Kazakhstan’s public exchequer $5 billion by 2020 and create 20,000 jobs.