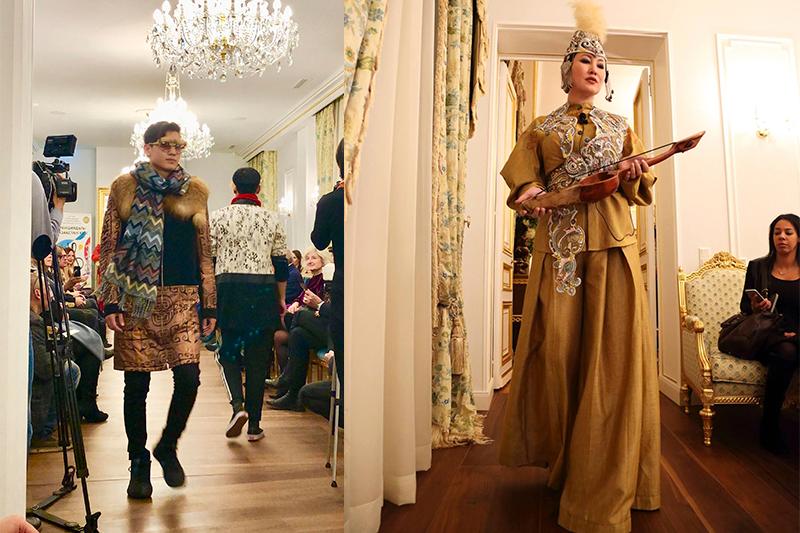 Kazakhstani traditional clothing and jewelry went on display in Paris, showcasing the versatility and distinctiveness of the cultures found within one of the Caspian region’s largest and most rapidly developing countries.

“Designers have a very peculiar taste, and this is what I value. I’m attracted to original ideas, an extraordinary approach to work. I’m always interested to see what is different from others,” said Hind Joudar, the founder and president of the Oriental Fashion Week show, who was among the visitors at the event.

Musical accompaniment at the event was provided by the Bastau – a duo playing the dombra, the Kazakhstani national musical instrument – and Gulnur Orazymbetova who sang Kazakhstani folk songs. Attendees had an opportunity to taste some national cuisine as well. The event was the last in a program series called “Kazakhstan’s autumn in France” and initiated by the country’s embassy.

But it is President Nursultan Nazarbayev’s “Ruhani Zhanyru” project that is ultimately responsible for the cultural push. Ruhani Zhanyru is meant to revitalize the “spiritual values of Kazakhstan citizens, taking into account all the modern risks and challenges of globalization,” according to a government website.

“President Nazarbayev’s initiatives to revive the culture and strengthen the unity of the multi-ethnic people are the cement of the nation,” said Didier Vidal, the Editor In Chief of La Lettre Diplomatique, according to reports by Atameken.

The idea behind the concept of using traditional clothing to promote Kazakhstan was to integrate elements of folk art into modern European looks. Throughout the centuries, clothes of ethnic Kazakhs were distinguished by simplicity, and leather, fur and thin felt were used as the main materials to manufacture traditional attire for Kazakhstanis. Ornaments, including jewelry, were the main decorations on attire because art, painting, drawing and sculpture were not as developed in the territories until the mid-20th century.

The most popular ornaments displayed various bird beaks and different animal horns, hooves and feet, and would indicate a wearer’s social status, age, and tribal affiliation. For example, materials such as silk, brocade and velvet indicated wealth and well-being.