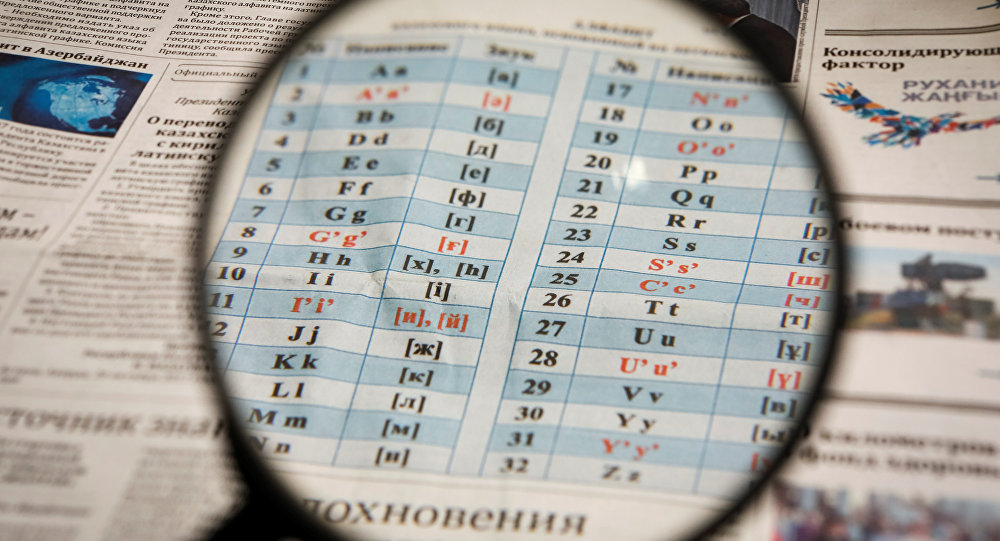 Digital applications that came online this week in Kazakhstan’s capital Astana include a multifunctional converter that allows shifting text written in Cyrillic script to the new Latin-based version.

After Kazakhstan’s President Nursultan Nazarbayev approved last year a new, Latin-based version of the script in which the Kazakh language will be written, local experts are trying to make the language easier for foreigners to learn, and easier for locals to read and write.

“We are now working to launch new applications that can be used to shift the Kazakh alphabet into the Latin script to help young people quickly master information technologies,” Kuat Borashev, an official who chairs the government’s language policy committee, said on Monday, according to reports by Kazinform.

Digital applications that came online this week in Kazakhstan’s capital Astana include a multifunctional converter that allows shifting text written in Cyrillic script to the new Latin-based version. Developers managed to convert a Kazakh epic novel, “The Path of Abai” – a two-volume book that totals more than 1,200 pages – in just six seconds.

Another project that is helping transliterate the Turkic language into a Latin script is a new Web-based portal Qazlatyn.kz that uses the new Latin alphabet to report news and other information about Kazakhstan.

For those looking to learn the language, which has ties to other Turkic languages such as Turkish, Azerbaijani and Uzbek, web developers have created Tilqural.kz and Sozdikqor.kz electronic search systems, both featuring more than 300,000 words. Tilqural is an interactive self-study platform that uses English as the base language for instructions and explanations.

Experts from Kazakhstan’s Coordination and Methodological Center for the Development of Languages are looking to leverage these and other digital tools, train more than 11,000 educators across the country.

“We will take up adult education, and the Ministry of Education and Science will cover schools, colleges and universities. At the initial stage, we need to train teachers who will then train the population,” Yerbol Tleshov, who heads the center, told Kazinform.

Experts are planning on hosting seminars in all regions across Kazakhstan. In addition, employees of central government agencies, media representatives, as well as literary editors will be trained to publish books using the Latin script.

“This year, we will prepare online lessons which will be available to the public,” Tleshov said.

In 2017, Kazakhstan’s President Nursultan Nazarbayev ordered that the Kazakhs language be written using a Latin-based alphabet rather than the Cyrillic script, and that the transition be completed by 2025. Following public debates, a draft version of the Latin-based alphabet, which included 32 letters, was introduced; however, it was later modified. The revised version uses diacritical marks to denote sounds found in the Kazakh language that are not present, for example, in English or European Romance languages.

Re-writing a language does not come cheap. The government in Astana budgeted about $664 million, and some experts expect that number to rise, as all government materials, signage and course materials will need to be produced to make the switch successful nationwide.

Meanwhile, some experts expect ethnic Russians living in Kazakhstan, which are estimated to be about 20 percent of a total population of nearly 19 million, may be adversely affected by the change.

Besides geography and geopolitics, Russia and Kazakhstan are culturally linked. Russians are the second-largest ethnic group in Kazakhstan according to Kazakhstan’s National Statistics Committee. In addition to Kazakh, Russian is an official language of the country, reflecting Astana’s strong ties to Moscow and an appreciation for Russian contributions to what is an ethnically Turkic majority country with a Soviet past.

While some says Nazarbayev’s decision will force Kazakhstan’s Russians to leave the country, Russia’s Foreign Minister Sergey Lavrov believes such a conclusion is reactionary.

“Yes, Kazakhstan makes decisions that, in particular, provide for a switch to the Latin alphabet. There is nothing here that would somehow infringe upon the Russian language and the rights of the Russian-speaking population of the republic,” Sputnik cited Lavrov as saying earlier this year.