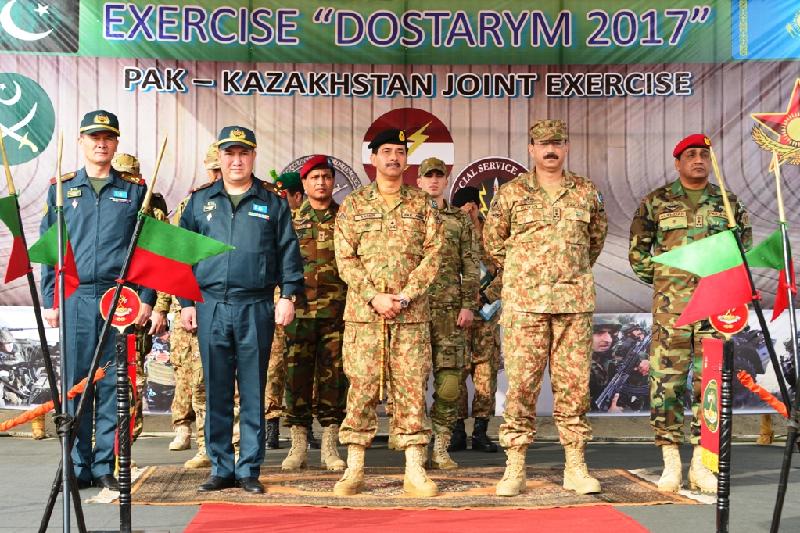 With conflicts in the Middle East and South Asia practically on their doorsteps, countries within the Caspian region have taken measures in recent years to beef up national security and law enforcement agencies, in order to fight terrorism and extremism collectively.

Kazakhstan has spearheaded efforts within the Caspian, Central and South Asia regions throughout 2017. The most recent activity involved two weeks of joint military drills and exercises between Kazakhstan and Pakistan.

The exercises, dubbed Dostarym 2017 (“Friendship 2017”) and held in Pakistan, were to increase the professionalism of Special Forces units, learn from best practices and field-based counter-terrorism tactics.

“The exercises have been successfully completed, we have gained a lot of experience in conducting counter-terrorism operations in the fight against terrorism,” said Kazakhstan’s Special Forces commander Captain Nurlan Sabirov, according to reports in BNews.kz.

Kazakhstan also held 14-day exercises with India, dubbed Prabal Dostyk 2017, or “robust friendship 2017,” aimed at enhancing interoperability between the two armies to fight terrorism. The exercises took place in the Indian state of Himachal Pradesh, just south of Jammu and Kashmir, and began on November 2.

“The overall aim is to enhance the existing military relationship between the Indian Army and the Kazakhstan Army and achieve synergy for joint conduct of operations as and when the requirement arises,” read a press release issued by the Indian army and reported in The Hindustan Times.

Joint exercises are not the only form of training and capacity building carried out by Kazakhstan’s armed forces. Karatau 2017, or “Black Mountain 2017,” was held from September 12-18 in Almaty and Zhambyl provinces, involving 10,000 Kazakhstani troops, 1,500 military vehicles, 40 planes, helicopters and naval vessels, to acquire skills in identifying and destroying terrorist groups both on and offshore. Exercises included mock scenarios of terrorists infiltrating Kazakhstan from abroad, taking up positions in remote parts of Almaty and Zhambyl provinces, as well as hijacking a ship on Kazakhstan's portion of the Caspian Sea.

The latest developments in Syria, Iraq and Afghanistan directly impact Central Asian nations, which have not been hit hard by extremism, but at the same time are no strangers to it.

The most recent high-profile terrorist act in Kazakhstan took place on June 5, 2016 when a group of terrorists attacked two weapons shops in Aktobe. According to Kazakhstan’s National Security Committee (NSC) chairman 13 criminals connected to the shootings were killed and 14 were injured.

The event shook up the political establishment in Astana, and put authorities on alert for the hundreds of young Kazakhstanis that may return from Syria and Iraq after fighting alongside the Islamic State (IS) or other terrorist outfits.

Figures vary on the number of Kazakhstanis that have joined IS but Deputy Foreign Minister Yerzhan Ashikbayev has put the number at about 500, including the wives and children of the fighters.

The last known group of Kazakhstanis-turned-insurgents left for the Middle East in 2016, when the security agencies registered 69 such cases. President Nursultan Nazarbayev subsequently enacted a law in July of this year, authorizing the revocation of citizenship of Kazakhstanis convicted of forming or joining terrorist groups, among other crimes.

The latest operation, conducted jointly by the Kazakhstani intelligence agency and the Interior Ministry in the southern Kazakhstani province, was on November 16 and resulted in the arrest of 10 adults between the ages of 19 and 50 accused of spreading IS ideology. Detainees have been accused of spreading extremist ideology via social networks and through mobile apps such as WhatsApp and Telegram messages.

According to the NSC the suspects left behind extremist-related materials in more than 20 networked communities with more than 400 participants.

In a video appeal, the group called for the overthrow of Kazakhstan’s government.