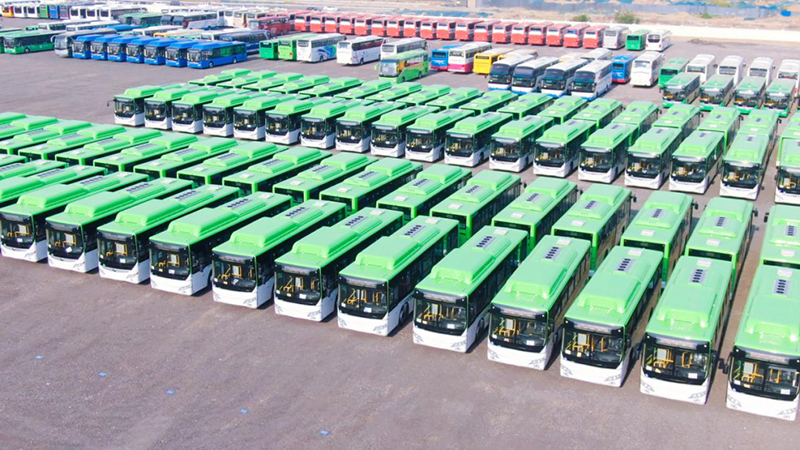 Two cities in Kazakhstan — Shymkent and Atyrau — will put into operation buses powered by compressed natural gas by early June, according to the statement issued by the Chinese manufacturer. A batch of 760 buses has already been delivered to Kazakhstan. / Yutong

As air pollution issues have long become an everyday struggle, officials in Kazakhstan are partnering with a Chinese manufacturer of commercial vehicles, Yutong, to get rid of traditional diesel buses in Kazakhstan’s streets.

Two cities in Central Asia’s largest country — Shymkent and Atyrau — will put into operation buses powered by compressed natural gas by early June, according to the statement issued by the Chinese manufacturer. A batch of 760 buses has already been delivered to Kazakhstan.

‘‘It has become the largest overseas order that Yutong garnered since the outbreak of COVID-19 in January,’’ Chinese Xinhua News Agency quoted Miao Yuan, a regional sales manager at Yutong, as saying.

The cost of the contract between the two neighboring nations, however, has not been disclosed.

The municipal governments of Shymkent and Atyrau have purchased different models of buses — 590 units and 170 units respectively. The vehicles shipped via railway in order to facilitate cross-border transportation amid the COVID-19 outbreak can operate at low temperatures specific to Kazakhstan.

As a municipality directly under the central government, Shymkent has a population of one million and is the most dynamic city in southern Kazakhstan, while Atyrau is considered the petroleum city. Chinese-made buses are expected to help Kazakhstan upgrade its urban public transport system as well as meet the passenger-carrying demand in Shymkent, the country’s third most populous citiy, and Atyrau.

‘‘At the same time, the application of clean energy vehicles will also effectively reduce the air pollution in cities and contribute to the urban environmental protection,’’ reads the company’s statement.

Kazakhstan’s population is slightly more than 19 million – high for Central Asia, but globally low. Under the Kyoto Protocol, which went into effect in 2009, Kazakhstan vowed to reduce its carbon emissions by 15 percent by 2020 and up to 30 percent by 2050. The country committed to switching to a “green” economy, despite vast fossil fuel reserves, and is determined to generate three percent of its electricity from renewables by 2020; 10 percent by 2030; and at least half by mid-century.

Eco-friendly electric cars are gaining momentum in Kazakhstan, where roughly 700 of them were on the road as of mid-2019.

Meanwhile, eco-friendly buses are nothing new for Central Asia’s largest country. In 2019, electric buses began operating on the roads of Aktau, a city along the east bank of the Caspian Sea. Earlier this year, the municipal government of Nur-Sultan, Kazakhstan’s capital city, put into operation five electric buses manufactured jointly by Yutong and Kazakhstan-based vehicle manufacturer and distributor Saryarka AvtoProm.

Yutong has been active in Kazakhstan since 2005 and now ranked first in terms of the export quantity of the large and medium-sized buses to the domestic market of Kazakhstan.

As of December 2019, the company’s total sales in the Central Asian country exceeded 2,000 units, accounting for more than 40 percent of China’s large and medium-sized buses exported to Kazakhstan during the period. At the same time, the company owns and operates eight service stations and one spare part warehouse in Kazakhstan.