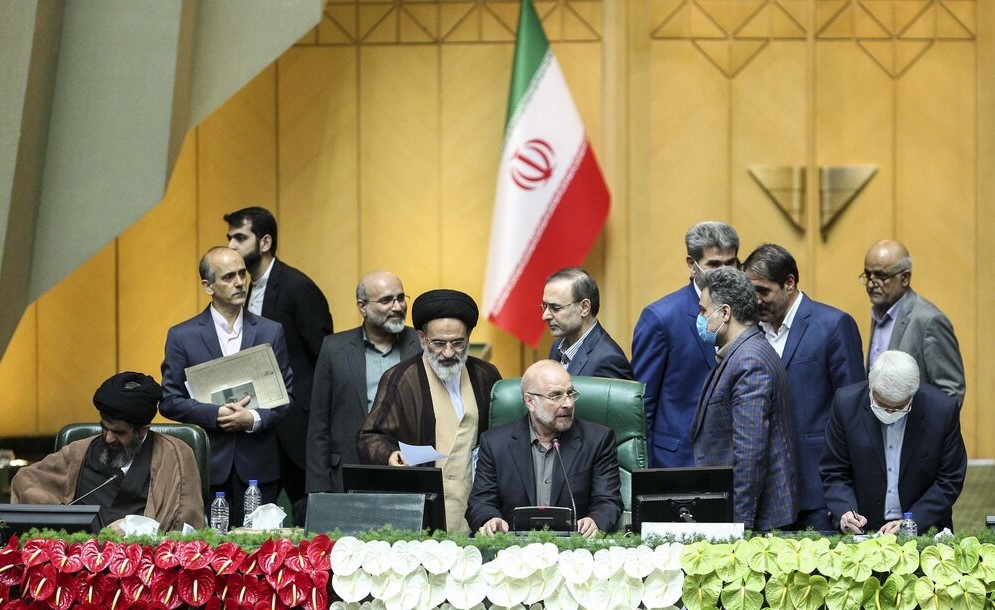 The new Iranian lawmakers held an open session on May 28, and Mohammad Bagher Ghalibaf, a former mayor of Tehran, was elected as the new speaker of the parliament with 230 votes. / MEHR News Agency

Iranian President Hassan Rouhani congratulated a former military commander, hard-liner politician Mohammad Bagher Ghalibaf on his election as Speaker of the Iranian Parliament, in a message on May 28.

“I hope that in the new chapter of the Islamic Consultative Assembly [Iran’s parliament], with joint efforts and constructive interaction between the government and the parliament, we see more synergy in organizing the affairs of the country, especially in the difficult conditions of unprecedented sanctions and the outbreak of coronavirus to solve people's problems, increase hope in the society and serve the great Iranian nation more” the official website of the Iranian president quoted the president as saying.

In a parliament session on May 28, 230 out of 264 legislators gave their votes to former Tehran Mayor Mohammad Bagher Ghalibaf, aged 58. He replaced Ali Larijani, who held the speaker position since 2008.

Ghalibaf served as Iran's Chief of police from 2000 to 2005 and an Air Force commander of the Islamic Revolution Guard Corps from 1997 to 2000. He was a commander during the 1980-1988 Iran-Iraq war. Later, he became the deputy commander of Basij militia and then led IRGC's financial department where he served until 1997. Ghalibaf lost presidential elections against Mahmoud Ahmadinejad in 2005, and current president Hassan Rouhani in 2013 and 2017. During the 2017 presidential elections, he withdrew his candidacy in the final hours in favor of Ebrahim Raisi, the current Judiciary chief. Currently, Ghalibaf reportedly leads a new political formation, named "Neo-Principlists.''

Conservative lawmakers Amir-Hossein Ghazizadeh Hashemi and Ali Nikzad were also elected as the first and second vice-speakers of the parliament.

Ghalibaf’s election is expected to increase the stand-off between the new parliament where 220 out of the 290 seats are held by conservatives and relatively moderate Rouhani.

Gholamreza Ansari, a leading member of the reformist Unity of nation Party urged the new parliament to avoid tensions with the administration ahead of the 2021 presidential elections, suggesting that the parliament should “try to resolve the deadlock surrounding the anti-money-laundering and terror-financing bills that in reality have already cleared parliament and are being held back by hardliner watchdogs.”

Three of the four conservative factions, the ultraconservative Paydari, Pro-Ahmadinejad groups and the pro-Ghalibaf neoconservatives have made it clear that they oppose incumbent president Rouhani who will leave office in August 2021 and will stand against him once the parliament becomes operational. However, to pass bills in the previous parliament, the Rouhani administration faced near-zero resistance as moderate and Reformist members were in full control.

The Iranian lawmakers are elected for a four-year term with no limitation for the incumbent or former parliamentarians to run again.