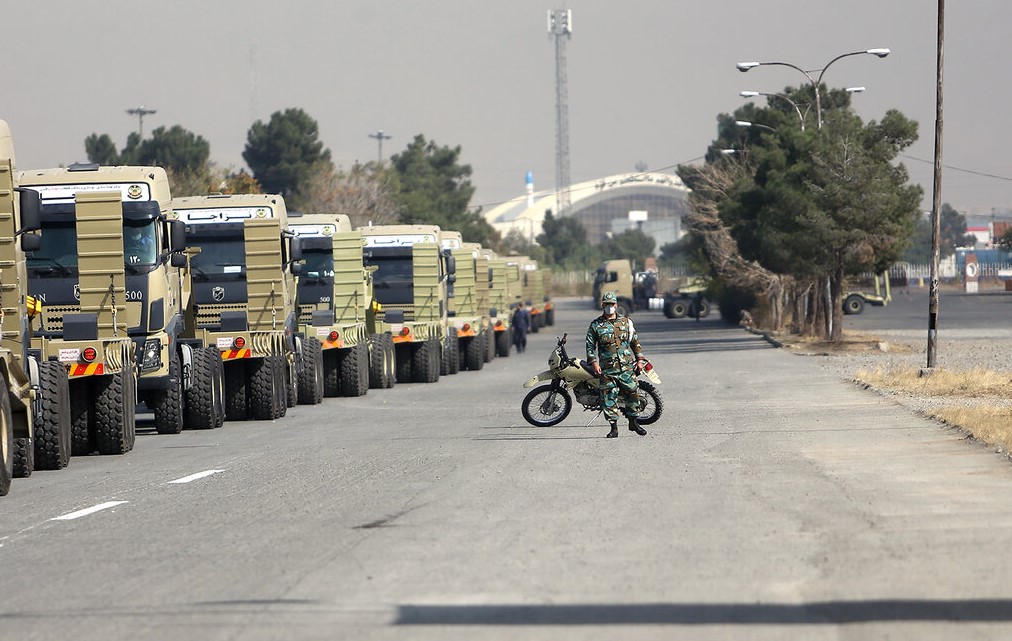 Over 500 heavy machinery, manufactured by Iranian military experts, have been delivered to the Iranian Army's Ground Forces, on October 28, 2020. / IRNA news agency

Over 500 domestically-manufactured extra-heavy armored vehicles have been delivered to the Iranian Army's Ground Forces, amid U.S. efforts aimed at unleashing a new package of sanctions on Tehran.

The heavy machinery, manufactured by Iranian military experts, included tank carriers and heavy semi-trucks put into operation in the presence of Iran’s Army Commander, Major General Abdolrahim Mousavi, during a ceremony on October 28.

Iran has taken great steps in the production of essential military equipment and defense systems in the face of decades-long sanctions and arms embargoes on the country.

On October 22, Iran concluded the massive air defense drill code-named “Defenders of the Velayat’s Skies-99,” which included demonstration of surface-to-air missiles, launchers, radars, and command-and-control equipment. In recent years, Iran has prioritized the readiness and integration of its air defense assets through such drills.

The drills started a few days after the lift of the 13-year ban on Iran's export and import of arms on October 18 under the terms of the UN Security Council Resolution 2231 that blessed the 2015 nuclear deal between the Islamic Republic and world powers. However, following the lifting, U.S. Secretary of State Mike Pompeo warned that the United States will impose sanctions any individual or entity that assists Iran’s weapons program, a move that will likely further aggravate tensions between Washington and Tehran.

The United States announced on October 29 that it had reportedly seized Iranian missiles shipped to Yemen and sold 1.1 million barrels of previously seized Iranian oil that was bound for Venezuela.

On October 27, the U.S. Treasury Department announced the sanctions on the “key actors” in Iran’s oil sector over their links to the Islamic Revolutionary Guard Corps (IRGC), a military organization already designated as a terrorist entity by the US government. The treasury accused a series of state oil companies and individuals of involvement in the IRGC’s “destabilizing activities”.

The U.S. Treasury Department and the Department of State have jointly imposed sanctions on a combined 11 different entities and individuals for their involvement in the purchase and sale of Iranian petrochemicals. The sanctions freeze any assets of those blacklisted deployed in the US and generally bar Americans from dealing with them.

U.S. Secretary of State Mike Pompeo said the sanctions are part of a maximum pressure campaign to limit the Iranian regime’s ability to threaten its neighbors and destabilize the Middle East.

"The few remaining buyers of Iranian crude oil should know that they are helping to fund Iran’s malign activity across the Middle East, including its support for terrorism," Pompeo said in a statement.