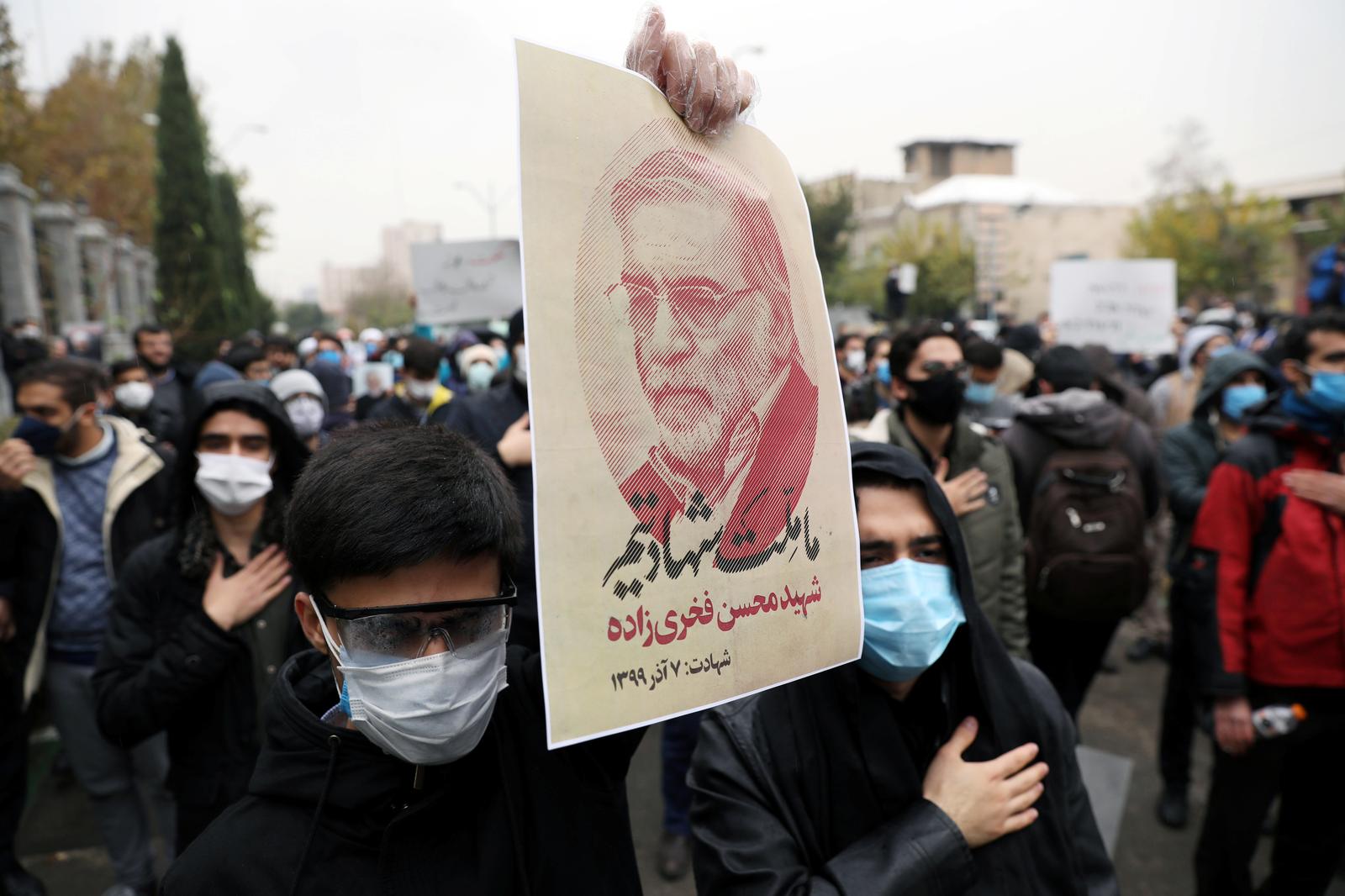 A protester holds a picture of Mohsen Fakhrizadeh, Iran's top nuclear scientist, during a demonstration on November 28, protesting against his killing in Tehran, Iran. / Reuters

The Iranian military commanders and high-ranking officials have vowed a decisive response to the perpetrators of the assassination of an Iranian nuclear scientist.

“Such crimes would by no means impede Iran’s resolve to move forward, and “harsh revenge and punishment against them have been put on the agenda,” the commander of the Islamic Revolution Guards Corps (IRGC) Major General Hossein Salami said in a message on November 27, on the occasion of the martyrdom of professor Mohsen Fakhrizadeh, head of the Iranian Defense Ministry’s Research and Innovation Organization.

Fakhrizadeh, 59, was attacked in the Damavand’s Absard area east of Tehran while a car bomb exploded near his car, and after this, a number of assailants clashed with the scientist’s bodyguards. After sustaining injuries from a car explosion and bullets, Fakhrizadeh was transported to the hospital on a helicopter but died only a few hours later.

Iranian sources accuse the agents of Western and Israeli intelligence agencies of killing Fakhrizadeh, saying that he “was on the Mossad (the Israeli intelligence agency) assassination list for many years, and his assassination attempt failed once in previous years”. Moreover, Israeli Prime Minister Benjamin Netanyahu mentioned Fakhrizadeh in a 2018 presentation on the alleged atomic archive of Iran that Israel claims it stole from a warehouse in southern Tehran.

Iranian President Hassan Rouhani accused Israel of assassinating the prominent scientist in a statement on his official website on November 29.

"Once again, the wicked hands of the global arrogance, with the usurper Zionist regime as the mercenary, were stained with the blood of a son of this nation," Rouhani said, adding that Israel aims to create "chaos" by carrying out the scientist's assassination and that Iran will retaliate at "the proper time".

Foreign Minister Mohammad Javad Zarif also blamed Israel for the killing of the scientist, saying in a tweet that “terrorists murdered an eminent Iranian scientist today. This cowardice — with serious indications of Israeli role — shows desperate warmongering of perpetrators. Iran calls on the international community — and especially the EU — to end their shameful double standards & condemn this act of state terror."

A top adviser to Iran’s supreme leader, Kamal Kharrazi, who is also head of Iran’s Strategic Council on Foreign Relations, said in a statement that “undoubtedly, Iran will give a calculated and decisive answer to the criminals who took Martyr Mohsen Fakhrizadeh from the Iranian nation."

Several Iranian lawmakers called for an end to Iran’s cooperation with the United Nations’ nuclear watchdog - the International Atomic Energy Agency (IAEA) - and to significantly raise uranium enrichment level in response to the assassination.

Fereydoun Abbasi-Davani, the head of the Iranian Parliament’s Energy Committee, said that “right now, the Majlis [parliament] will focus on four issues, which I will personally pursue: 1- starting 20-percent [uranium] enrichment, 2- expelling all Agency’s inspectors, 3- ending cooperation with the Agency, 4- withdrawing from the JCPOA [The Joint Comprehensive Plan of Action, known as the 2015 Iran nuclear deal]”.

Abbasi-Davani, who previously served as chief of the Atomic Energy Organization of Iran (AEOI) from February 2011 to August 2013, narrowly survived an assassination attempt in northern Tehran in November 2010. He holds a Ph.D. in nuclear physics.

The 9-article bill compels the government to jump-start Iran’s nuclear program by increasing the country’s nuclear activities such as producing at least 120 kilograms of enriched uranium with 20 percent purity at the Fordow nuclear facility every year and using more advanced centrifuges.

Several Iranian scientists working in the nuclear sector have been killed over the past decade, and Tehran blamed Israeli and the US intelligence services for these attacks.

In January 2010, Massoud Ali Mohammadi, a particle physics professor at Tehran University, was killed when a booby-trapped motorcycle exploded outside his home in the capital. In November 2010, Majid Shahriari who had played a key role in the Iranian nuclear program was killed, while another nuclear scientist Fereydoon Abbasi, survived.

Darioush Rezaeinejad, an Iranian nuclear physicist, was shot dead outside his house in July 2011 by gunmen on motorbikes. In November 2011, an explosion in a munitions depot of the IRGC in a Tehran suburb killed at least 36 people including General Hassan Moghadam, who was in charge of weapons programs for the elite unit.

In January 2012, Mostafa Ahmadi Roshan, a nuclear scientist who was a supervisor at the Natanz uranium enrichment facility, was killed in a blast after a motorcyclist detonated a bomb attached to his vehicle.