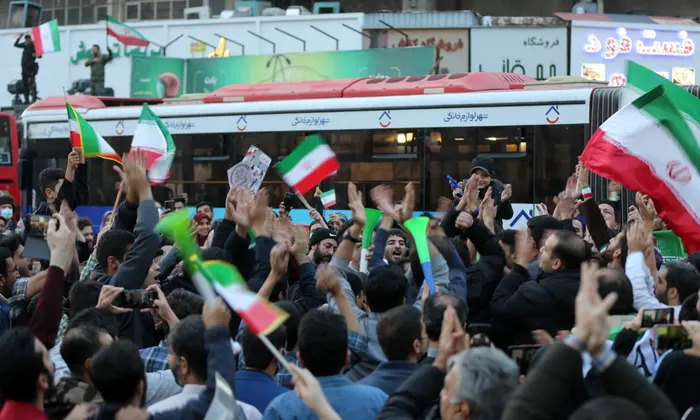 Iranians celebrated World Cup exit as a symbolic victory against the country's regime, on November 29, 2022. / The Guardian

An Iranian man was shot dead by the country’s security forces for celebrating the defeat of the national team by the United States and elimination from the 2022 FIFA World Cup. The incident occurred amid continuing anti-government protests across Iran.

Mehran Samak, 27, was targeted directly and “shot in the head by security forces” in the northern Iranian city of Bandar Anzali, on November 30, according to the Norway-based Iran Human Rights organization. The New York-based Center for Human Rights in Iran (CHRI) published a video from Samak’s funeral in Tehran on November 30 at which mourners could be heard shouting “death to the dictator” as they reportedly referred to Iran’s Supreme Leader Ayatollah Ali Khamenei.

The US team won the politically charged match on November 29, scoring one goal against Iran in the first meeting of the two teams at the World Cup since 1998. Many Iranians had reportedly refused to support the national team, and after the match on November 29, footage on social media showed crowds cheering and setting off fireworks.

In addition, the Iranian team declined to sing the national anthem in their first game against England, which they lost 6-2. However, they sang it before the second game, a 2-0 victory over Wales, and again on November 29.

Meanwhile, there were celebrations in Tehran as well when Iran lost to England.

Since September, Iran has been gripped by nationwide protests triggered by the death of Mahsa Amini, a young Iranian-Kurdish woman. Iran’s security forces have so far killed at least 459 people in the crackdown on the protests, including 64 under the age of 18, according to the foreign-based Human Rights News Agency (HRANA).