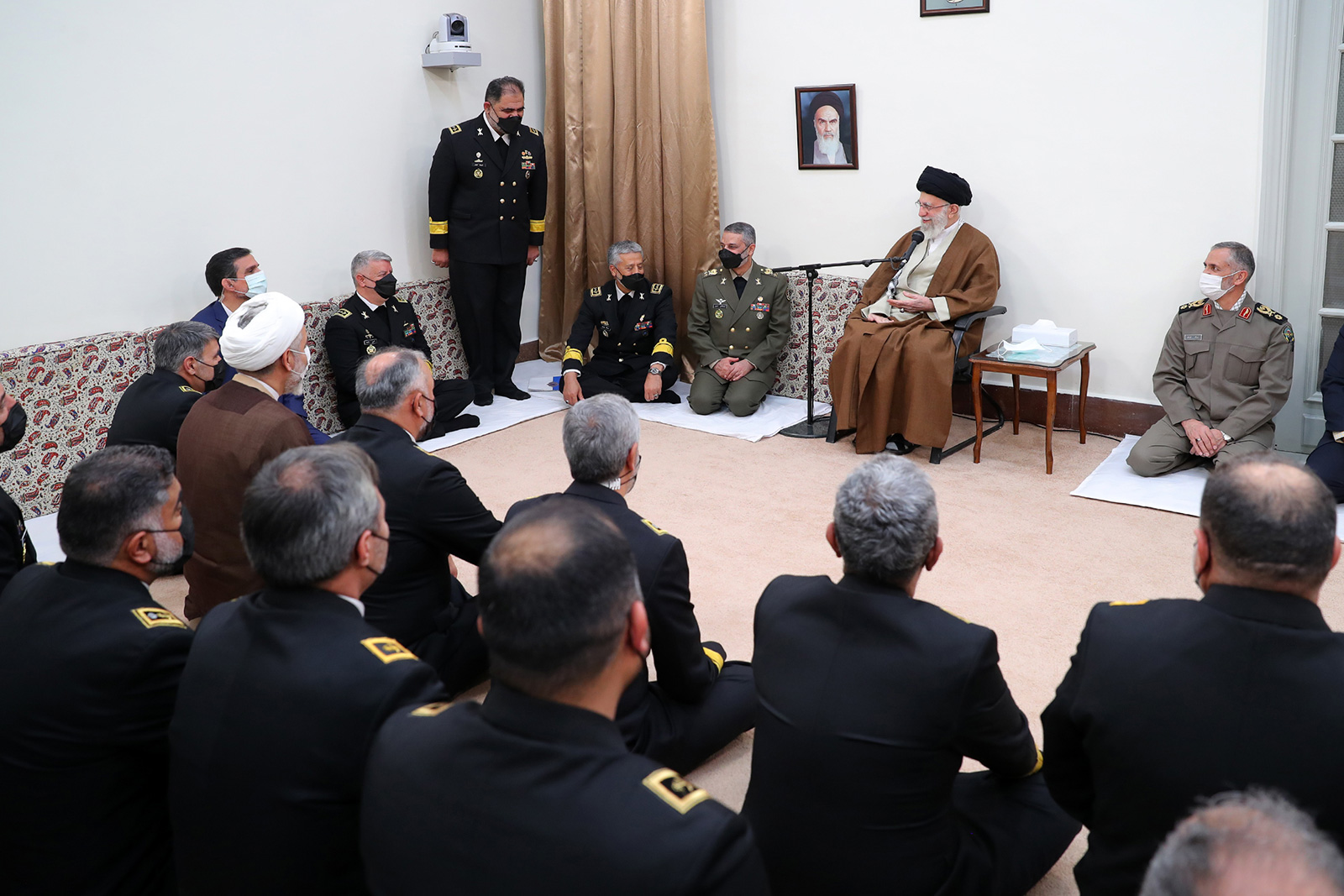 A number of commanders and officials of Iran’s Navy met with Ayatollah Seyed Ali Khamenei, Leader of the Islamic Revolution and the commander-in-chief of the Iranian Armed Forces, on November 28, on the occasion of Navy Day. / Khamenei.ir

The leader of the Islamic Revolution has called for Iran’s naval forces to expand their reach and capabilities in international waters and high seas.

"It is necessary to comprehensively improve the navy’s combat power and defense equipment while continuing measures such as sailing in distant and international waters," the commander-in-chief of Iran’s Armed Forces, Ayatollah Ali Khamenei, said in a meeting with a number of Iranian naval commanders on November 28 on the occasion of the country’s Navy Day, according to Khamenei.ir.

He added that “despite this history and our vast seacoasts in the north and especially the south of Iran, the culture of using the opportunities available at sea has been neglected and needs to become a part of the public culture of the country.”

Noting the importance of Makran's coastlines in the International North-South Transport Corridor, Khamenei said that “during the past few years, developing the Makran Beaches has been discussed, and governments have welcomed this idea”.

Iran has recently constructed significant nautical and commercial infrastructure in a number of Makran districts, particularly at Chabahar port, which serves as a vital trade route between the Indian Ocean and landlocked nations in Central Asia. Makran is a historical region in Iran that runs from mountains west of Jask all the way to parts of Pakistan's Balochistan province in the southeast along the Sea of Oman.

On November 27, Iranian President Ebrahim Raisi visited the second marine area of Bandar-e Jask in the southern province of Hormozgan to participate in the naval parade of the Iranian Army on the occasion of the Army Navy Day.

The president also visited the exhibition of the achievements of the Navy before going on the deck of the Sahand destroyer to review the parade of the subsurface, surface and flying units of the Army.

“Despite the threats that exist today in international waters and different parts of the oceans, the presence of the navy is reassuring for economic operators,” the president said during his visit, adding that “the expansion of economic activities and commercial development is possible with the presence of the naval forces of the Army.”

In recent years, Persian Gulf waters have witnessed attacks on tankers that have come at times of heightened regional tensions with Iran. On November 22, the US Navy's Bahrain-based 5th Fleet published photos and details of its investigation into the attack on the Liberian-flagged Pacific Zircon tanker, including debris from the Shahed-136 drone itself.

In a statement, the Navy said the drone ripped a 30-inch-wide (76 cm) hole into the back of the ship. The explosive impact damaged a shipboard boiler, potable water tank and life raft.

"The Iranian attack on a commercial tanker transiting international waters was deliberate, flagrant and dangerous, endangering the lives of the ship's crew and destabilizing maritime security in the Middle East," Vice Adm. Brad Cooper, the top US Navy commander in the Middle East, said in a statement.

However, Iranian Foreign Ministry Spokesman Nasser Kanaani November 28 called accusations made by the United States suggesting Iran was behind an attack on a tanker in the Gulf of Oman "baseless".

Earlier, in July 2021, a suspected drone attack hit a petroleum product tanker managed by an Israeli firm off Oman's coast. Iran denied any involvement in the incident.