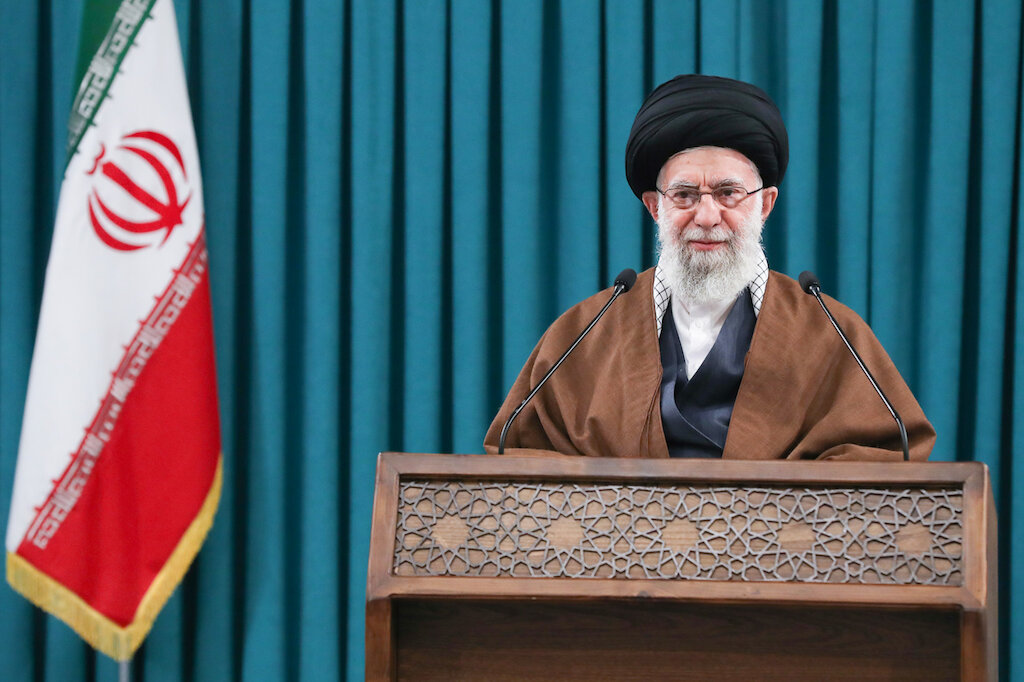 The Leader of the Islamic Revolution in Iran, Ayatollah Ali Khamenei, addressed the people in a live televised speech on March 1, 2022, on the occasion of Eid al-Mab'ath, the day on which the prophet of Islam was appointed to prophethood by God. / Khamenei.ir

Iran's Supreme Leader Ali Khamenei has expressed his support for ending the war in Ukraine and said that the US policies have led to the crisis.

“Iran advocates ending the war in Ukraine. However, the solution to any crisis only works when the root cause of the crisis has been identified. The root of the crisis in Ukraine is the US policies that create the crisis, and Ukraine is one victim of these policies,” he said during his annual speech on March 1, on the occasion of Eid al-Mab'ath, the day on which the Holy Prophet of Islam was appointed to prophethood by God.

Khamenei accused Washington of instigating unrest in Ukraine and claimed that the US "dragged Ukraine to this point. Naturally, interfering in the internal affairs of that country, organizing rallies against governments, launching color revolutions, the presence of American Senators among the demonstrators, and toppling one government and putting another in power lead to such crises.”

Since the beginning of the war, European countries and organizations have said they would support Ukraine and supply the country with hundreds of millions of dollars worth of arms. At the same time, they have expressed their intention to impose economic sanctions against Russia.

On February 28, the spokesperson for the Iranian Foreign Ministry, Saeed Khatibzadeh, called for urgent dialogue between Russia and Ukraine to settle the crisis, saying that Tehran is encouraging all parties to participate in meaningful negotiations with the aim of resolving existing problems.

Referring to Iran's current stance on Russia after Moscow had launched military attacks on Ukraine on February 24, Khatibzadeh said the relations between Iran and Russia are “multilayered, multidimensional, and totally natural originating from good neighborliness, natural demands of the two sides, and political will of the two capitals to promote the relations to premium ties."

He said that despite the fact that Tehran understands "the security concerns" of some countries because of several decades of “NATO’s expansionism”, "Iran supports any diplomatic effort that would lead to a peaceful resolution of the conflict in Ukraine and is ready to draw up a plan to assist in the return of peace."

There are 4,200 Iranian citizens in Ukraine, including 1,400 Iranian students studying in the country, according to government estimates. Tehran has evacuated hundreds of Iranians from various areas in Ukraine shortly before and during the war.

About 300 Iranian students and nationals were evacuated from Ukraine and repatriated on March 1.

In a telephone conversation with his Russian counterpart, Sergey Lavrov, on February 25, Iranian Foreign Minister Hossein Amir Abdollahian described the security and health of Iranians residing in Ukraine as a "serious priority", and added that Iran is trying to evacuate more of its citizens through Ukraine's neighboring states.

Russian forces launched a major assault on Ukraine on February 24. The invasion by land, air, and the sea began after a pre-dawn TV address where President Putin demanded that Ukraine’s military lay down its arms.