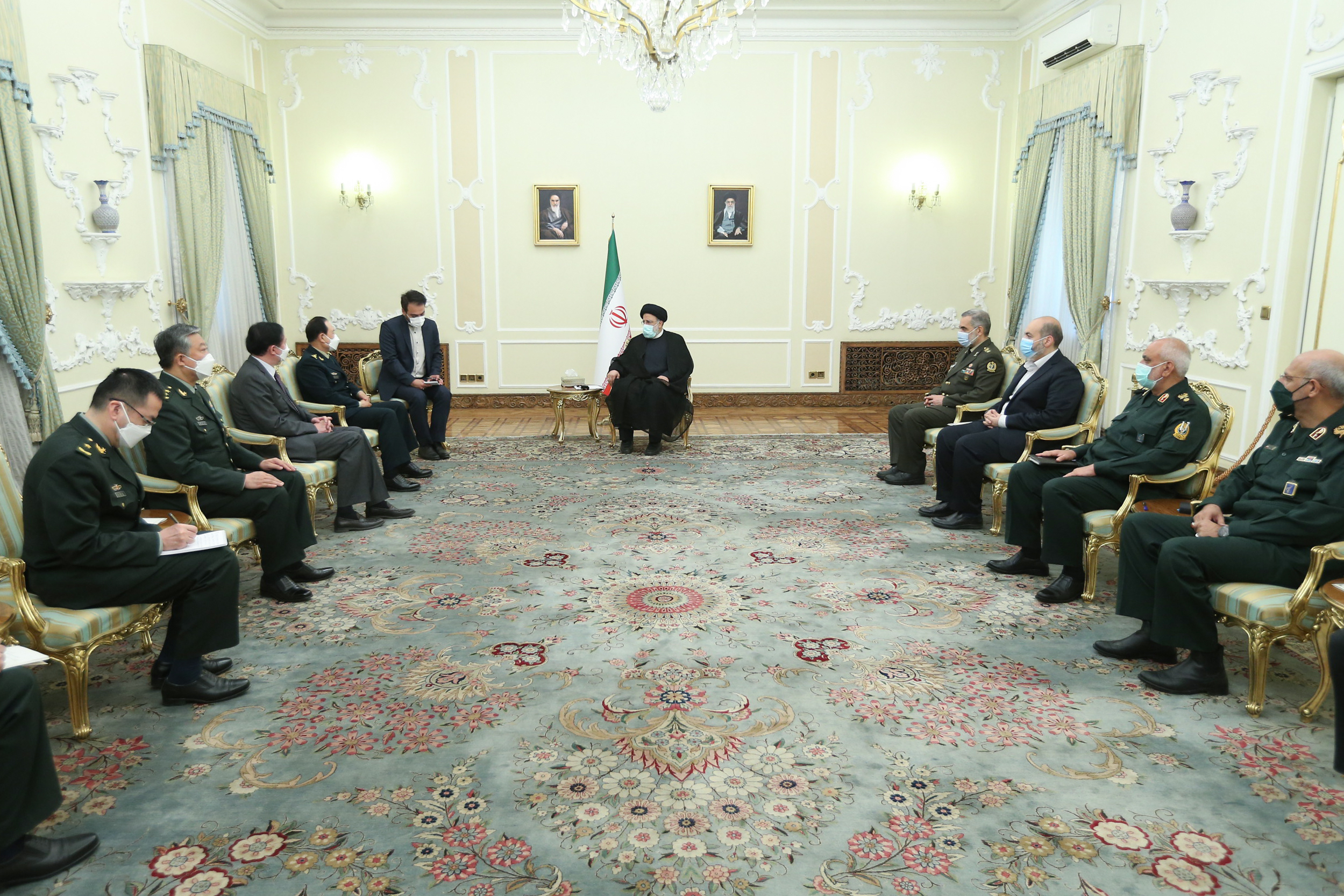 The picture shows a meeting of Iran's President Ebrahim Raisi with the Minister of Defence of the People's Republic of China, Wei Fenghe, in Tehran on April 27, 2022. / president.ir

Defense ministers of Iran and China have stressed the need to boost bilateral military ties in order to fight US “unilateralism.”

“The US military presence anywhere in the world has triggered waves of insecurity, instability, division, war, destruction and displacement,” Mohammad Reza Ashtiani told his Chinese counterpart, Wei Fenghe, at a meeting in Tehran.

Iran’s top defense official added that “common security challenges and threats can be fought off through interaction and cooperation between independent countries opposing unilateralism in the world.” Ashtiani further blamed “the West’s expansionist policies” and its “exploitation of security vacuums.”

In his turn, Wei criticized US’ “unilateralist” actions and described cooperation as an effective tool in establishing regional and global security. The Chinese minister noted that his delegation’s visit to Iran shows the importance of Beijing’s strategic ties with Tehran.

In a meeting with Wei Fenghe, Iran’s Chief of Staff of Armed Forces, Mohammad Bagheri, discussed further expanding military ties and trading expertise in areas such as military exercise, training, and cooperation in other areas.

The minister agreed to exchange military expertise with China to boost security in territories under their control.

“Relations between the Armed Forces of Iran and China have been developing in recent years, and so far, we have held joint exercises in the Sea of Oman,” Bagheri said.

On January 21, Iran, China, and Russia participated in the “CHIRU-2Q22” naval exercise in the northern Indian Ocean. It was the third such drill held by these countries within a “Marine Security Belt” initiative.

Meanwhile, while in Iran, the Chinese defense minister also met President Ebrahim Raisi, who blamed the US for “violating” Iran’s nuclear deal, known as JCPOA.

“Through violating the Iran nuclear deal, the Americans were seeking to place the Islamic Republic under the worst forms of pressure,” Raisi said at a meeting, adding that “Washington now officially admitting to have suffered a humiliating defeat.”

The Chinese minister, in turn, noted that strengthened Iran-China ties are of particular vitality as they “bring security to the world at a moment of crises and instability.”

In recent years, Iran and China have boosted military ties, with their navies visiting each other’s ports and holding joint naval drills in the Indian Ocean.

In 2021, Iran and China signed a 25-year strategic cooperation agreement that covered a variety of economic activities from oil and mining to promoting industrial activity in Iran, as well as transportation and agricultural collaborations.

Iranian officials, dealing with an economic crisis, hope it will bring billions in investment and make Iran a key part of China’s Belt and Road Initiative — a multi-trillion-dollar infrastructure scheme designed to stretch from East Asia to Europe. The project, aimed at significantly expanding China’s economic and political influence, has raised concerns in the United States.

China is also a signatory to the nuclear deal between Iran and world powers, along with Russia, Britain, France, and Germany.