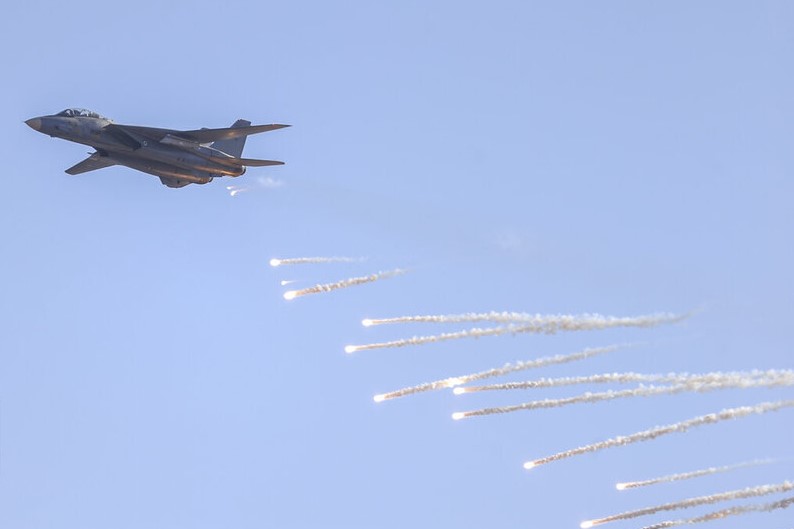 The final stage of a large-scale, two-day drill of the Iranian Air Force was conducted in the central province of Isfahan on November 3, 2020. / IRNA news agency

The Iranian air forces have conducted the two-day air defense exercises in the central province of Esfahan, spanning across seven airfields.

Referring to the drills, Iran Air Force Commander Aziz Nasirzadeh said that "the aim of conducting the manoeuvres is to improve the combat capabilities and practice for implementing operational plans, and obtaining a suitable model for the battle, in real conditions and by using different types of aircraft".

The Sukho-24 strategic bombers as well as F-4, F-5, F-7, F-14, MIG-29, and the indigenously-manufactured Sa’eqeh (Lightning) fighters participated in the exercise. The airpower was backed by Boeing-707 and -747 tanker planes, and C-130 military transport aircraft as well as the domestically-built Karrar (Striker), Ababil (Bird Flock), Arash, and Kaman (Bow) unmanned aerial vehicles that are equipped with long-range smart bombs, precision-guided missiles, and radar jamming devices.

Iran’s Su-24 fighter jets had successfully destroyed hypothetical enemy targets by firing 500-kilogram smart missiles in the first day of the massive drills. The Sukhoi-24 bomber fighters carried different types of home-made optimized and pin-pointing 500-kg missiles, destroyed the ground targets, including the radars of imaginary enemy, during the wargames.

The F-14 fighters also successfully carried out aerial refueling operations from the Boeing 707 refueling tankers during the drills. The Kaman-12 drones sortied over the hypothetical enemy’s positions for reconnaissance, aerial imaging, and electronic eavesdropping.

Commander-in-Chief of Iran’s Army, Major General Abdolrahim Mousavi told reporters that the drill has ended while all predetermined plans and goals have been achieved with high precision and authority of pilots and commanders.

“Today, the arrogant American regime is the biggest threat to freedom across the world. If American leaders commit miscalculation, resisting against them will be conducted with all might,” the general added.

The latest Iranian drills come amid a continuing confrontation between Tehran and Washington, which has intensified in recent years due to the increased presence of American military vessels in the Persian Gulf region despite Tehran's objections.