Iran’s Navy is charged with the responsibility of forming Iran's first line of defense in the Gulf of Oman. However it is mostly operates in the Persian Gulf and Gulf of Oman, the Red Sea, the Mediterranean Sea and northwest quarter of the Indian Ocean. / Iran Daily

An outgoing Iranian navy commander has said that the country plans to send fleets to open seas between Europe and the Americas at some point in the future.

“Sailing in open waters between Europe and Americas should be the Navy’s goal, which will be realized in the near future,” Rear Admiral Habibollah Sayyari said at a ceremony in Tehran to introduce the new commander of the navy on November 8, according to reports by Tasnim news agency.

In recent years, Iran’s naval forces have increased their presence in international waters to protect naval routes and provide security for merchant vessels and tankers. Iran has repeatedly warned that any act of transgression into the country's territorial waters would be met with an immediate and befitting response.

The Iranian navy has been conducting anti-piracy patrols in the Gulf of Aden since November 2008, when Somali raiders hijacked the Iranian-chartered cargo ship MV Delight off the coast of Yemen. That gulf, which links the Indian Ocean with the Suez Canal and the Mediterranean Sea, is an important energy corridor, as Persian Gulf oil is shipped to the west via the route.

According to outgoing Navy chief Sayyari, so far Iran has sent 47 flotillas of warships into international waters. Over the past nine years they have managed to escort more than 4,000 cargo ships and oil tankers in the Gulf of Aden, located between Yemen and Somalia; Bab al-Mandab, near Djibouti; and the Red Sea.

"The 47th fleet could establish security for 1,851 Iranian and foreign cargo ships and oil tankers in the Gulf of Aden, Bab al-Mandab and the Red Sea,” Sayyari said, according to Fars news agency.

In November 2016, the Iranian chief of staff of the armed forces, Major General Mohammad Hossein Bagheri called for setting up naval bases across on the coasts of Yemen and Syria in the future.

“Is having naval bases in faraway places any less [significant] than nuclear technology? I say it’s ten times more [important],” Bagheri said, adding that such a move would provide Iran with an effective deterrent against its enemies.

In August, Sayyari first revealed his idea to dispatch Iranian naval fleets to the west of the Atlantic Ocean. A month later, a flotilla of Iranian warships left the country’s southern port city of Bandar Abbas for the high seas to guard commercial ships and oil tankers in the face of piracy threats.

Iran has been actively working to build its naval capacity. In September, Sayyari announced that researchers are working on producing nuclear-powered engines for submarines, warships and destroyers, to make them navigable for long periods of time without the need for refueling.

“We will certainly carry the job within the framework of the nuclear deal and the safeguards agreements and will not do anything beyond that,” Salehi said. 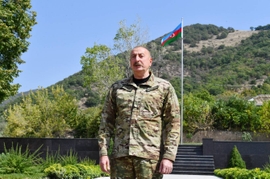