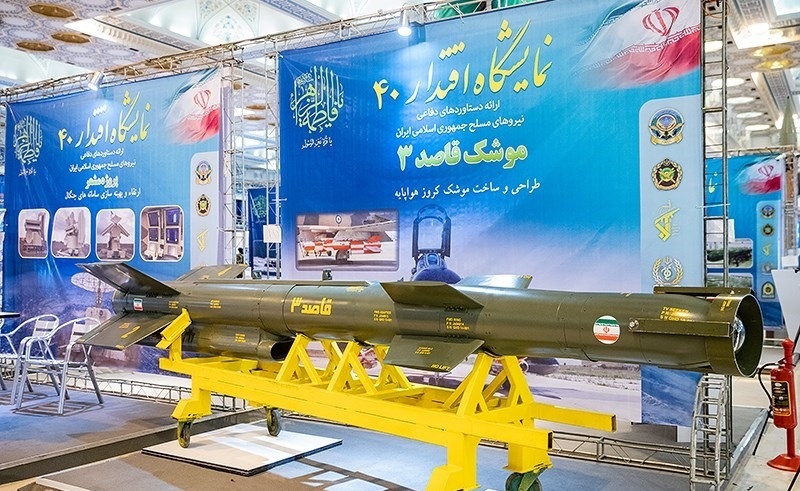 Qassed-3 missile with a flight range of 100 kilometers, which had previously been showcased during military parades, was put on display at the military exhibition kicked off in Tehran, on January 30, 2019. / Tasnim News Agency

New military hardware, including drones and missiles, were unveiled at an exhibition showcasing the achievements of the Iranian Armed Forces, in Tehran on Wednesday.

“A total of 500 products which are completely produced in Iran, have been showcased at the expo,” the Chairman of the Chiefs of Staff of the Iranian Armed Forces, Major General Mohammad Hossein Baqeri, said at a military exhibition headlined as “Eghtedar-40” (meaning “power” in Farsi), according to Kayhan.

The event opened ahead of the 40th anniversary of the 1979 Islamic Revolution in Iran. The exhibition will keep its doors open to receive visitors until February 11. Products on display include armored light weapons, air and marine arms, and missiles.

“Today, we are ready to mass-produce and export all these products," Baqeri was quoted as saying.

Drones on display include Kaman 12 and Shahed-171, both designed and built by Iranian specialists. Kaman can fly at 200 kilometers per hour for 10 straight hours, and it can use an airstrip as short as 400 meters, covering a 1,000-kilometer combat radius. The unmanned aerial vehicle weighs 450 kilograms and supposedly can carry a payload as heavy as 100 kilograms.

Shahed-171 is a stealth combat drone that carries four smart precision guided missiles or bombs. Iranian specialists reverse-engineered the American-made stealth RQ-170 and developed a home-grown version called Simorgh. Subsequently, Iran upgraded Simorgh, and made the reconnaissance drone into a combat one, complete with Iranian-made engines and supposedly improved stealth capabilities and electronics that can be used in attacks, calling it Shahed-171 (“martyr”).

In addition, Mohajer-6, Shahed-129, Karrar, Ababil and Sa’eqeh-2 drones are also on display.

Missiles named Toofan-3M and Toofan-7 are said to be some of the most advanced and newest achievements that Iran’s armed forces carry in its arsenal. Both are top attack projectiles, which strike armored vehicles from above. They detect targets with electromagnetic and laser sensors from above and detonate their warhead at the top of the target. Toofan-3M is a new generation of Toofan-3 missiles, while Toofan-7 is considered the newest homegrown anti-armor missile.

The Akhgar missile, also featured at the expo, is the latest projectile manufactured for deployment onto Iranian drones. The 1.7-meter-long, television-guided missile has a range of 30 kilometers and is reported to be able to fly at a speed of 600 kilometers per hour.

Qassed-3 is another missile on display, with a flight range of 100 kilometers. The missile, which has previously been showcased during military parades, can be deployed on fighter jets. It is equipped with a micro jet engine that enables it to be fired at a speed of 600 kilometers per hour toward targets, and is guided using a seeker head.

Anti-missile projectiles such as Shahin, which can be fitted onto fighter jets, are on display for the first time. The missile can be used to jam radars and an enemy’s electronic equipment.