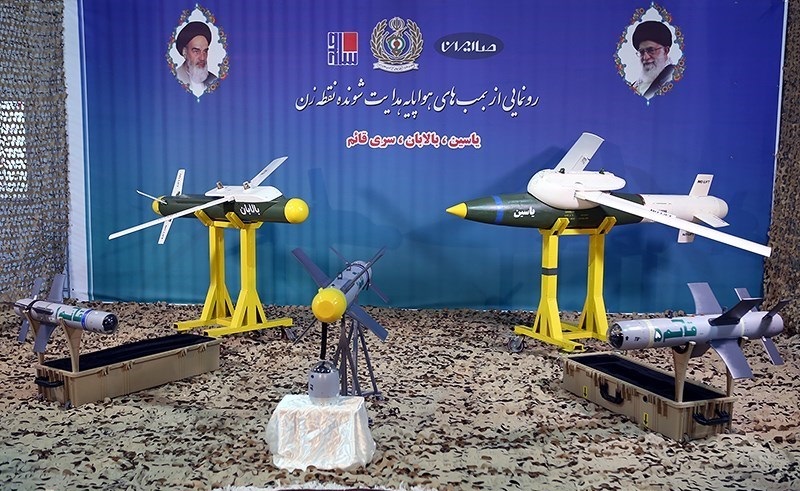 Iranian Defense Minister Amir Hatami unveiled the new homegrown munitions, including the ‘Yasin’ and ‘Balaban’ guided smart bombs and the newest generation of Qaem-class bomb, an electro-optical guided weapon with pinpoint accuracy, in a ceremony in Tehran on August 6. / Tasnim News Agency

Precision-guided munitions known as Yasin – named after a surah, or chapter, in the Koran – and Balaban, a bird of prey; along with a new generation of Qaem electro-optical guided bombs that are all domestically manufactured, were unveiled on Tuesday in Tehran, according to Iranian Labour News Agency.

"Balaban has folding wings designed to increase its range. It is guided by GPS and sensors and could be mounted under planes, choppers, and drones” Iran’s Defense Minister, Brigadier General Amir Hatami, said at the event.

Speaking about Qaem, the general said that it is also a “smart bomb,” meant for precision strikes, and could hit within 50 centimeters of a target. Supposedly Qaem can be equipped with different warheads, including penetrating and explosive fragmentation versions, which can be loaded on a broad range of drones, such as the Iranian-made Shahed-129, Hamase and Mohajer-6.

Mohajer-6 drones were recently flown by the Iranian Revolutionary Guard Corps ground force in an operation against terrorist groups operating along the border regions of Iraqi Kurdistan. The 5.67-meter (18.6 ft) drone has a service ceiling of 18,000 feet and flies at a maximum speed of 200 km per hour.

Meanwhile, Hatami announced on Wednesday that a homegrown long-range air defense system named Bavar-373 will be unveiled on the National Day of the Defense Industry, which falls on August 22 this year.

Bavar-373 is a domestically-built, long-range mobile air defense system which was developed after the UN Security Council passed a resolution banning the sale of advanced weapons to Iran, which in turn suspended Iran’s purchase of the Russian S-300 surface-to-air missile defense system.

A distinguishing feature of Bavar-373 is its vertical launching system with square launchers, mostly used for air defense on warships. It uses a long-range, phased array fire-control radar, dubbed Me’raj-4. It employs three different types of missiles to hit targets at various altitudes.

On August 4, Navy Commander Rear Admiral Hossein Khanzadi announced that the Damavand destroyer, which has been overhauled for the past 18 months, is now equipped with many new features and will soon be equipped with vertical launching system missile cells.