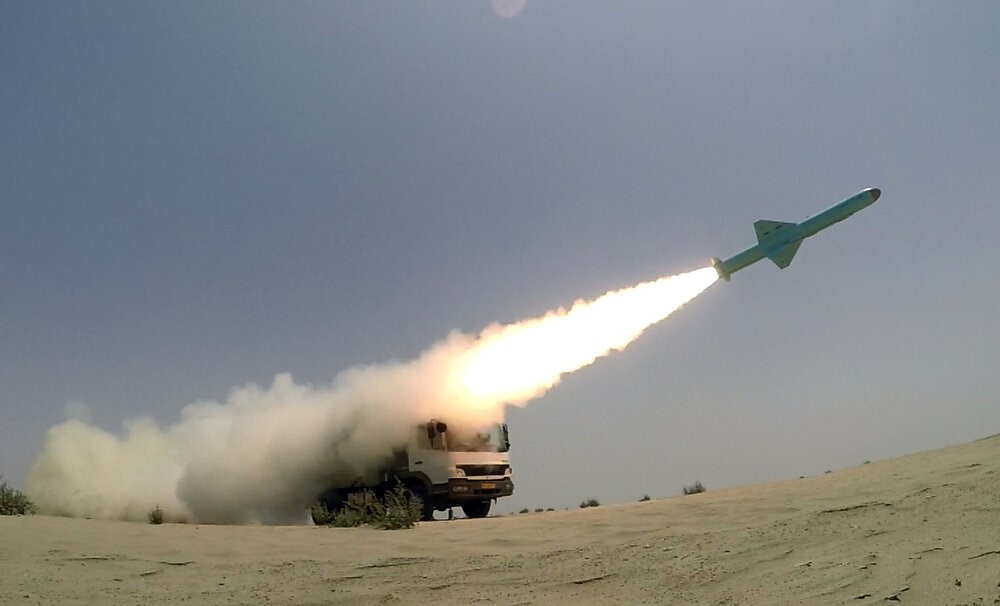 Coast-to-sea and sea-to-sea missiles, with different ranges, were simultaneously fired from the coastline and naval combatant ship and hit the target with high precision in a military exercise, on June 18, 2020. / MEHR News Agency

The Iranian Navy has test-launched short and long-range missiles during a military drill in the southern waters of the country.

Coast-to-sea and sea-to-sea missiles, with different ranges, were simultaneously fired from the coastline and naval combatant ship and hit the target with high precision in a military exercise dubbed as ‘‘Brave martyrs of Ramadan’’ (or Shohada-e Daryadel-e Ramazan in Persian) in the north of the Indian Ocean and Sea of Oman on June 18.

The home-made missiles destroyed the target from 280km away and the range can be enhanced. They have been designed and produced by the Iranian Defense Ministry with the cooperation of the Navy, the Navy force of the Iranian Army said in a statement.

The military drill carried out for the first time with this composition are said to be ‘‘more sophisticated’’ and ‘‘more difficult’’ than previous drills.

The event comes forty days after a mishap during a military exercise near the waters lying close to Jask and Chabahar ports that claimed the lives of 19 Navy personnel and injured 15 others.

On the sidelines of the drill, a deputy coordinator of Iran’s Army, Rear Admiral Habibollah Sayyari, described the missiles as a ‘‘promising step in enhancing defense and deterrence power.’’

‘‘Iran continues the path of self-sufficiency in the defense sector by relying on its own experts despite all cruel sanctions,’’ he said, describing the test-fire of the long-range cruise missile as a ‘‘sign of significant progress in increasing cohesion between armed forces and defense industry.’’

For his turn, Iranian Navy Commander Rear Admiral Hossein Khanzadi said that ‘‘obtaining this new domestic achievement by the Iranian youth shows Iran’s upper hand in confronting any threat against people and the establishment and it has also enhanced the self-confidence of the armed forces.’’

Addressing a close session of the Iranian parliament on June 16, Chief of Staff for the Iranian Armed Forces Major General Mohammad Bagheri has called for a budget increase to boost the countries defense capabilities.

The spokesperson of the Presiding Board of the Parliament, Mohammad Hossein Farhangi, also urged new parliament to increase a budget for the military sector in a bid to boost the country’s defense capabilities against different threats, and in order to take effective steps to meet the basic needs of the Armed Forces Headquarters.

Earlier, the commander of the Iranian Revolutionary Guards Corps, General Amir Ali Haji Zadeh, said that the Iranian specialists are working out the technology of advanced-targeted missiles, and these new guided missiles will greatly improve the IRGC’s capabilities in the field.

On June 7, Iran’s Islamic Revolutionary Guard Corps (IRGC) announced that the Tabas and Mersad missile systems have been able to destroy air targets with complete success, during the air defense exercises. IRGC’s mid-range TPS missile system also tested its readiness during the maneuvers by launching missiles towards targets, which destroyed the enemy’s virtual targets.

The spokesman for the ‘‘Wilayat 97’’ military drills, Admiral Sayyid Mahmoud Mousavi, confirmed the success of firing Shalamjah missiles and a dummy system, saying that ‘‘the manufacture and use of locally advanced equipment and technologies indicates that Iran can provide all its military needs by relying on internal capabilities.’’

Iran has been domestically producing new missiles, despite the US warnings about the Islamic Republic’s ballistic arsenal. The United Nation’s resolution that was adopted in 2015, urges Iran to refrain for up to eight years from work on ballistic missiles designed to be capable of delivering nuclear weapons after the JCPOA, an agreement that was signed between Tehran and six world powers to limit its nuclear program.