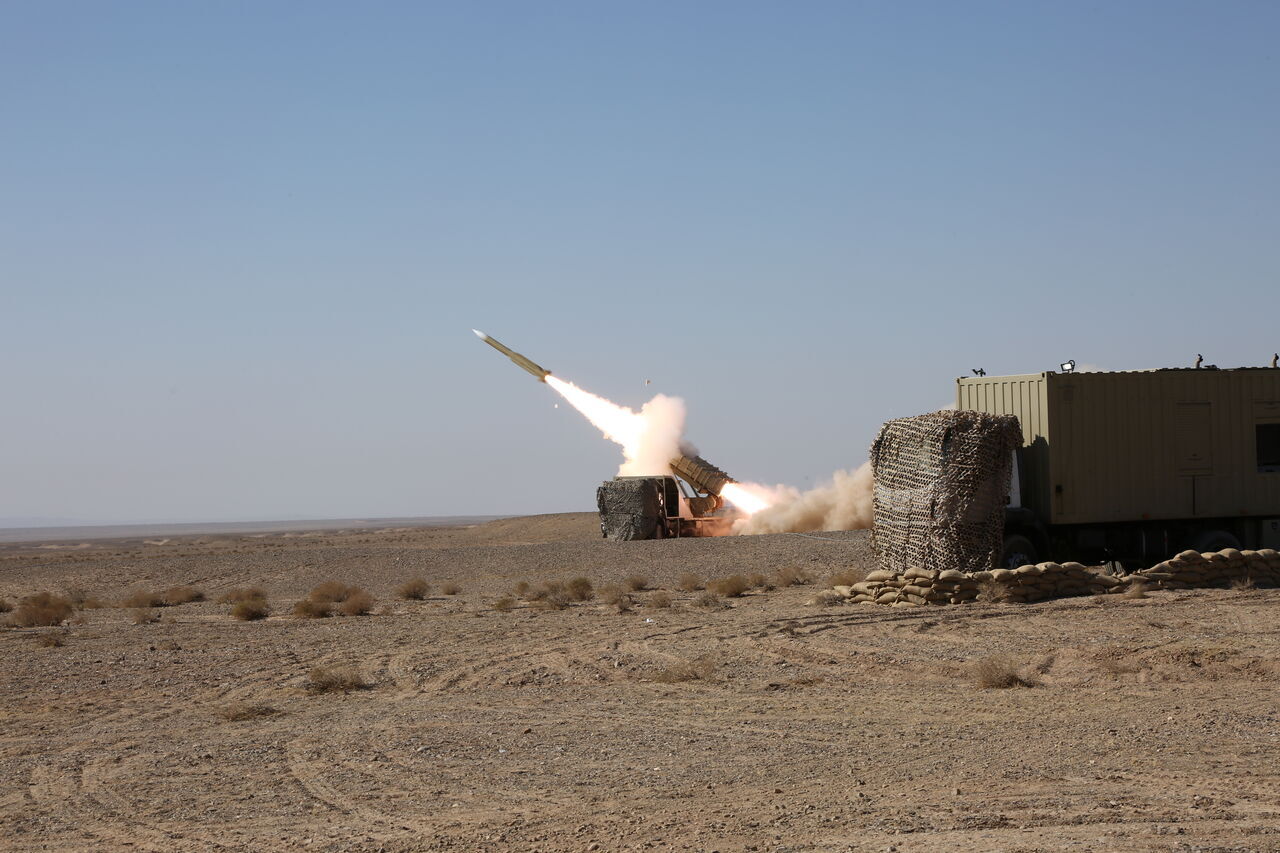 The Iranian Army test-fired a new generation of the domestically-manufactured Mersad-16 missile system in the Dasht-e Kavir desert, in the north-central province of Semnan on August 31, 2021. / IRNA news agency

The Iranian Army has successfully test-fired a new generation of the domestically manufactured Mersad-16 missile system in the Dasht-e Kavir desert in the country’s north-central province of Semnan.

Brigadier General Mohammad Khoshghalb, the Deputy Chief of Operations of the Army Air Defense, has said the Hazrat Valiasr Command and Control Center used the missile system for the first time to discover, identify, and destroy targets.

“The Mersad 16 missile system is entirely indigenous and benefits from new technologies to counter with electronic warfare and simultaneously engage with several targets,” Khoshghalb said on August 31, according to a report by Mehr news agency.

Developed in 2010, Mersad is a low- to mid-range air defense system. It fires Shahin missiles which are reportedly reverse-engineered, domestically upgraded versions of the American MIM-23 Hawk surface-to-air missiles. The system also uses a series of domestically produced radars and electronic devices.

Compared to Mersad’s previous generations, the Mersad-16 system can be installed on a truck, use new Iranian radars (Hafez and Najm-804), a launcher, or a box launcher and “Shalamcheh 2” missile.

This medium-altitude surface-to-air missile system can detect and take action against enemy targets at any flight altitude in real time. The optimized variant of the system would be unveiled in the near future.

On August 29, Iran’s army conducted an air defense surveillance drill codenamed “Ya Basir” across the country to test the preparedness of the regional command centers and air defense divisions and expand fixed and mobile surveillance posts in the impassable areas and passages. The military exercise aimed to assess the military readiness of the new reconnaissance network of the army’s air defense network, which is equipped with electronic, electro-optic, and resistance systems to counter enemy electronic warfare. These systems can find various types of flying objects, including drones and cruise missiles.

Meanwhile, the stimulator of Iran’s homegrown long-range Bavar-373 SAM system is expected to be unveiled on September 1.

More advanced than the S-300 missile system, the Bavar-373 is a fully homegrown, impenetrable, anti-hacking air defense system. It has a high capability of engaging with various types of covert and stealth aircraft as well as cruise and ballistic missiles. The Bavar-373 can also neutralize both conventional aerial targets such as aircraft and drones and high-speed ballistic missiles.

In May, Iran unveiled three new defense technologies, including the “Quds” radar system, a surface-to-air missile system dubbed “9-Day”, and the “Gaza” drone with a 2,000 km operating range.