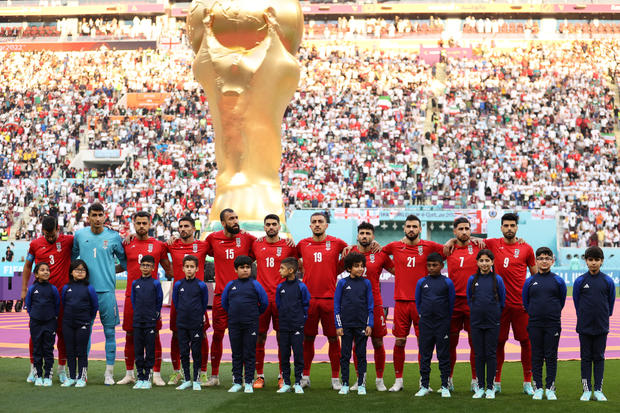 Iran players line up prior to the FIFA World Cup Qatar 2022 Group B match between England and Iran at Khalifa International Stadium. / Getty Images

The Iranian football squad did not sing the national anthem before their opening match against England on November 21, at the World Cup in Qatar, amid continuing protests across the country.

The team’s captain Alireza Jahanbakhsh said prior to the game that he and his teammates would decide "collectively" whether they would take a stand during the anthem in support of the anti-government protests.

It was not the first time that the Iranian football team didn’t sing the anthem or celebrate their victories in support of the protesters. On November 11, in the team's friendly match against Nicaragua, most of the Iranian players declined to sing the anthem.

The Iranian team suffered a 6-2 defeat against England in its first match in the 2022 World Cup.

Masih Alinejad, a New York-based activist from Iran, wrote on her Twitter account that "Iran is the only country in the World Cup that its people want their national football team to lose since the team doesn't represent the people but the regime".

At least 419 protesters have been killed since mid-September, including 60 children, and more than 17,000 people have been arrested, according to the Iranian foreign-based human rights website HRANA.

The protests have rocked Iran since the killing in police custody of 22-year-old Mahsa Amini on September 16.

The World Cup in Qatar has emerged as a rallying point for Iranian political mobilization. Protesters have even called on FIFA, soccer’s governing body, to prohibit Iran from competing in the tournament over restrictions on women in soccer stadiums and the government’s crackdown.

The Iranian government, for its part, has tried to encourage citizens to support their team against Iran’s traditional enemies. The Iranian team will play against the United States on November 29.