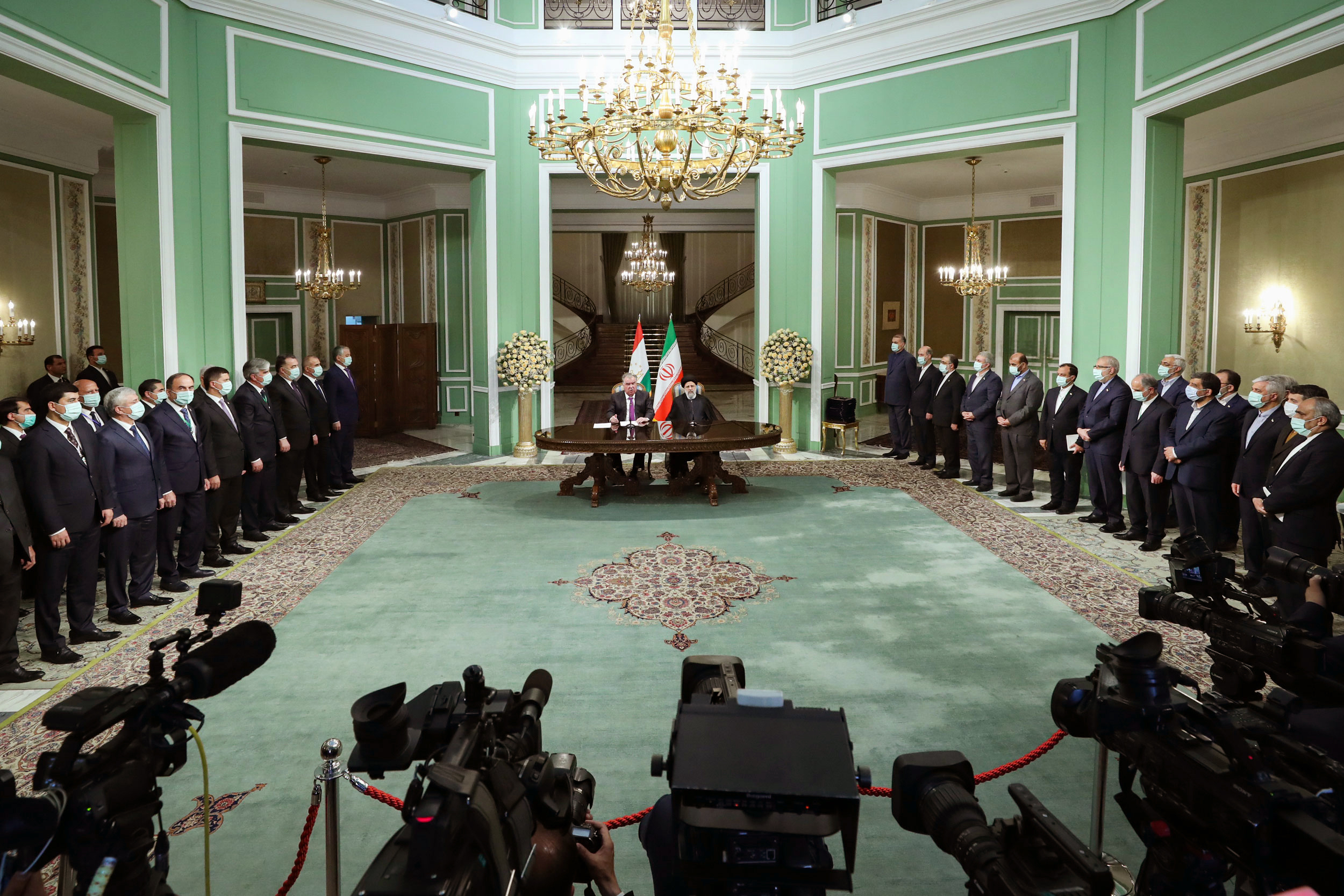 Iranian President Ebrahim Raisi and his Tajik counterpart Emomali Rahmon attended a joint press conference on May 30. Rahmon arrived in Tehran on May 29 on a two-day visit for talks with Iranian authorities. / president.ir

Iranian President Ebrahim Raisi, and his Tajik counterpart Emomali Rahmon have expressed interest in expanding cooperation in security and aligning their efforts to deal with the situation in Afghanistan.

He added that "Iran and Tajikistan agree on the issue of Afghanistan and that an inclusive government should be formed in this country that represents all parties, groups and ethnic groups. Both countries also want stability and security in Afghanistan and throughout the region, and consider the presence of terrorists in this country very worrying," the official website of the Iranian president reported.

Raisi underlined that both Iran and Tajikistan do not tolerate the presence of terrorists in Afghanistan or other parts of the region, saying that "the two countries believe that the outsiders and the evil hands of the arrogance that strengthen ISIL [the Islamic State terror group] and terrorist groups in the region do not even think about the security of the people of Afghanistan and the region, and they are only pursuing their own political goals and interests."

He added that the two countries also share similar views in the fight against terrorism, narcotics and organised crime, adding that cooperation between the two countries and countries in the region in this area can help stabilise and strengthen regional security.

For his turn, Emomali Rahmon described the current situation in the region and the world as sensitive, and stressed the need for cooperation between the two countries in the field of security.

"The two countries have common concerns about Afghanistan and stated that they welcome all political and diplomatic efforts and humanitarian aid for ensuring the security and prevent humanitarian disaster in this neighbouring country," he said.

The Tajik president mentioned the strengthening of cooperation in the fight against terrorism, drug trafficking and organised crime as other agreements reached during the visit, adding that "bilateral cooperation as well as cooperation between the two countries within the framework of regional and international organisations can help address common concerns of the two countries in these areas."

Referring to the long-term programme of cooperation between the two countries until 2030, Rahmon noted that "during today's visit, good agreements were signed in various economic and trade fields, as well as the activities of the Iran-Tajikistan Joint Council and the Joint Investment Committee."

Rahmon arrived in Tehran on a two-day visit for talks with Iranian authorities on May 29. A total of 17 documents in political, economic, trade, transportation, investment, new technologies, environment, sports, energy, judiciary, education, research and tourism spheres were signed between the two countries on May 30.

On the same day, at a meeting with the visiting Tajik president, Iran’s Supreme Leader Ayatollah Ali Khamenei referred to the "expansion of terrorism" in Afghanistan as Iran-Tajikistan's "mutual concern", calling on Afghan officials to form an all-inclusive government to resolve the issue.

"Iran and Tajikistan have a mutual concern about Afghanistan. Both countries are worried about the expansion of terrorism and takfiri [the one who considers other Muslims to be infidels] groups in this country. We believe that the gentlemen, who are now in power in Afghanistan, must use all groups in a comprehensive and inclusive government," the Leader's official website quoted Khamenei as saying.

He described sanctions as "major powers' weapon against nations", saying that "what deactivates this weapon is paying attention to internal strengths and capacities."

The Supreme Leader also referred the recent inauguration of Iran’s drone factory in Tajikistan, saying that "today, drones are an important factor ensuring the security of countries".

On May 17, Iran and Tajikistan launched a drone factory in the Tajik capital Dushanbe to manufacture the Iranian Ababil-2 tactical unmanned aerial vehicles (UAVs).

In June 2021, the Iranian and Tajik interior ministers discussed "cooperation in security, fighting crime, terrorism and extremism," and also signed a memorandum on security cooperation.

Since last year, Tajikistan has significantly increased efforts to reignite its relationship with Iran, especially against the backdrop of emerging security challenges in the region. In addition, land transit routes, Iranian ports of Chabahar and Bandar Abbas in the Gulf of Oman, and the Persian Gulf are also significant for Tajikistan.

Last year, the Taliban launched massive offensive recapturing swaths of land, including major cities and provinces, simultaneously with the withdrawal of the US servicemen from Afghanistan. The group’s return to power after being ousted in 2001 finished with the fall of the capital Kabul on August 15, 2021. President Ashraf Gani fled the country to avoid what he claimed could be “bloodshed.” The militant group changed Afghanistan’s name for the “Islamic Emirate of Afghanistan,” promising to establish an inclusive government in line with the Islamic sharia law.