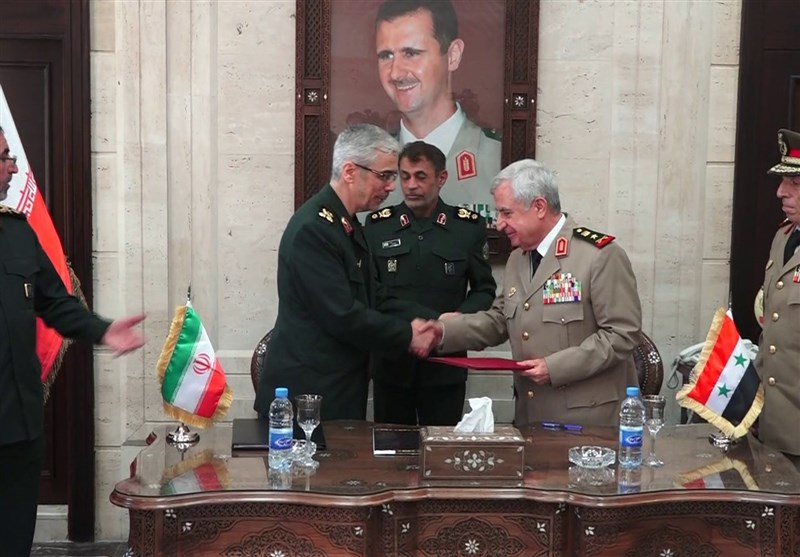 Chairman of the Chiefs of Staff of the Iranian Armed Forces Major General Mohammad Baqeri and Syrian Defense Minister Ali Abdullah Ayoub signed a comprehensive agreement to enhance their cooperation in the military and defense spheres in the capital city of Damascus, on July 8, 2020. / Tasnim News Agency

The top military officials of Iran and Syria have signed this week a comprehensive agreement to enhance their cooperation in the military and defense spheres.

“The deal increases our will to work together in the face of U.S. pressure,” Chairman of the Chiefs of Staff of the Iranian Armed Forces, Major General Mohammad Baqeri said after signing the agreement on July 8, at the headquarters of the General Command of the Syrian Army and Armed Forces, in Damascus.

“The people and countries of the region do not welcome the presence of the United States, and our response to the American prattling will continue,” Iran’s Tasnim news agency quoted Baqeri as saying.

He also added that Iran will “strengthen Syria’s air defense systems within the framework of strengthening military cooperation between the two countries.”

For his part, Syrian Defense Minister Ali Abdullah Ayoub said at the meeting that “If the American administrations had been able to subjugate Syria, Iran and the axis of resistance, they would not have hesitated for a moment.”

Referring to the U.S. sanctions imposed on Syria, Ayoub said that his country will counter the bans barring the delivery of foodstuff and medicine to its people.

The Iranian chief of staff also held talks with Syrian President Bashar al-Assad on Thursday, where the president expressed satisfaction with the signing of a memorandum of military and technical cooperation between the two countries.

“The memorandum shows the level of strategic relations between Iran and Syria and is the result of years of joint cooperation to fight against terrorism in Syria”, Assad said.

Bagheri, for his part, stressed the importance of the continuation of strengthening bilateral relations between the two nations in all fields, saying that it is in the interests of both countries.

Iran and Russia have formed an alliance in recent years to support Syrian President Bashar al-Assad's government against armed rebels. Tehran and its rival Saudi Arabia, a close U.S. ally, have been involved in proxy wars and political confrontations in the region for decades, from Iraq and Syria to Bahrain and Yemen.

However, the Iranian officials said it provides Syria only with advisory military assistance against the U.S. presence and its Western and regional allies.

It was the three leaders' first such meeting since Turkey butted heads with Russia and Iran in the rebel held-province of Idlib in March.