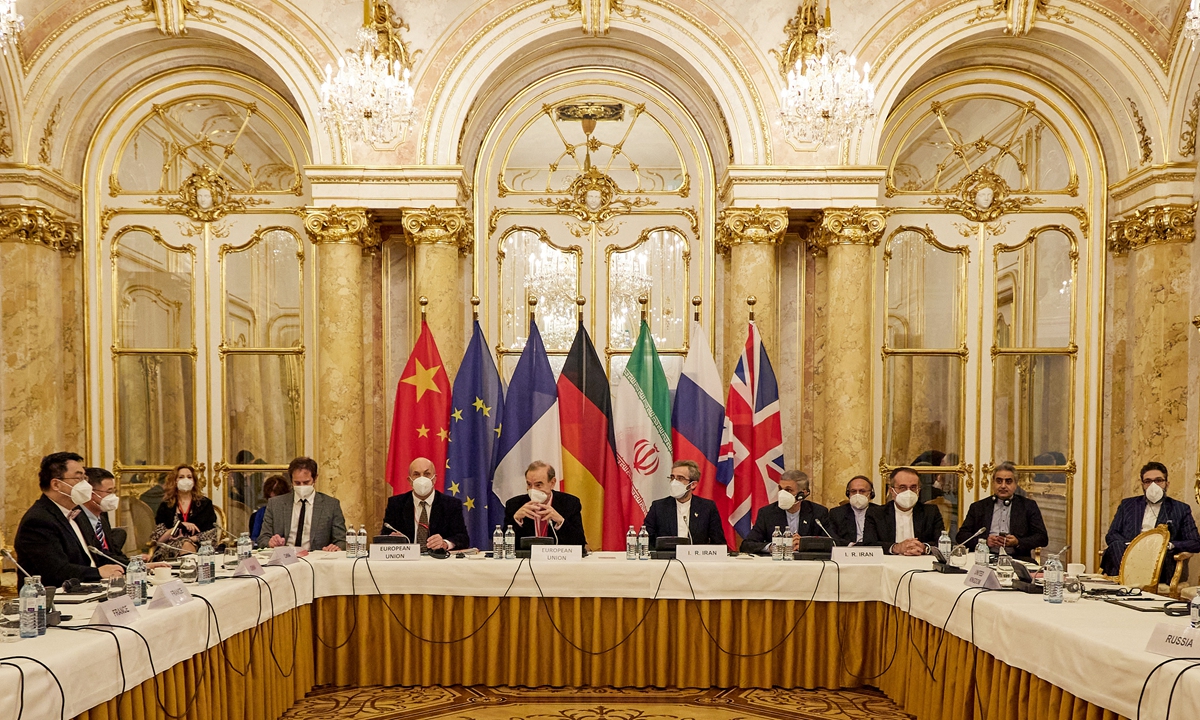 This picture shows a meeting of the negotiators of the Iranian nuclear deal on December 9, 2021, in Vienna, Austria. / AFP

Iran’s Foreign Minister Hossein Amir-Abdollahian has expressed satisfaction with the “right direction” of the ongoing talks to revive the 2015 nuclear deal, formally known as the Joint Comprehensive Plan of Action (JCPOA).

“Talks in Vienna are proceeding in the right direction,” Amir-Abdollahian wrote in a tweet on January 6.

“Iran’s initiatives brought the talks back on track in a constructive atmosphere. It is now up to the Western side to show good faith and commitment for a good deal,” he added.

The Iranian minister’s remarks came at a time of the eighth round of talks in Vienna between Iran and P4+1 (Britain, France, Germany, Russia, and China) to revive the JCPOA, which set restrictions on Iran’s nuclear program in exchange for sanctions relief. The US is indirectly involved in the negotiations.

The seventh round of talks to revive the JCPOA broke off on December 3, 2021, after Iran submitted two draft proposals to lift US sanctions and nuclear issues, as France, Germany, and Britain expressed concern with Iran’s demands. Last week, diplomats from the UK, France, and Germany noted that while they didn’t want to set “an artificial deadline for talks,” there remained “weeks, not months” to restore the nuclear deal.

He said that “reaching an agreement on the effective lifting of sanctions against Iran is the key to success in Vienna talks.” The diplomat further added that the seriousness of the US government in lifting sanctions would help shorten the time for reaching the agreement.

While in Vienna, Bagheri also met with his South Korean counterpart Choi Jong-Kun. South Korea is not directly involved in the Vienna talks. Still, the country’s deputy foreign minister arrived in Austria to exchange views with the negotiating parties over the frozen funds belonging to Iran.

During the meeting, Bagheri criticized Seoul over its “illegal and unjustifiable refusal to repay its debts,” referring to $7 billion of Iranian funds frozen in South Korean banks due to US sanctions. He stressed that Iran’s assets should be released “regardless of the outcome of the Vienna talks.”

“Unilateral US sanctions cannot justify the non-payment of debts to Iran,” Bagheri noted.

Last October, Iran urged the US to release at least $10 billion of frozen Iranian funds if it wants Tehran to resume nuclear talks.

On January 4, in reply to a question about the visit of the South Korean diplomat to Vienna and the possibility of releasing Iran’s assets, US Department of State Spokesperson Ned Price said he “wouldn’t want to get ahead of where we are.”

“What I will say is that sanctions relief and the steps that the United States would take on the – when it comes to sanctions, together with the nuclear steps that Iran would need to take if we were to achieve a mutual return to compliance with the JCPOA, that’s really at the heart of the negotiations that are ongoing in Vienna right now,” the spokesperson said at the press briefing.