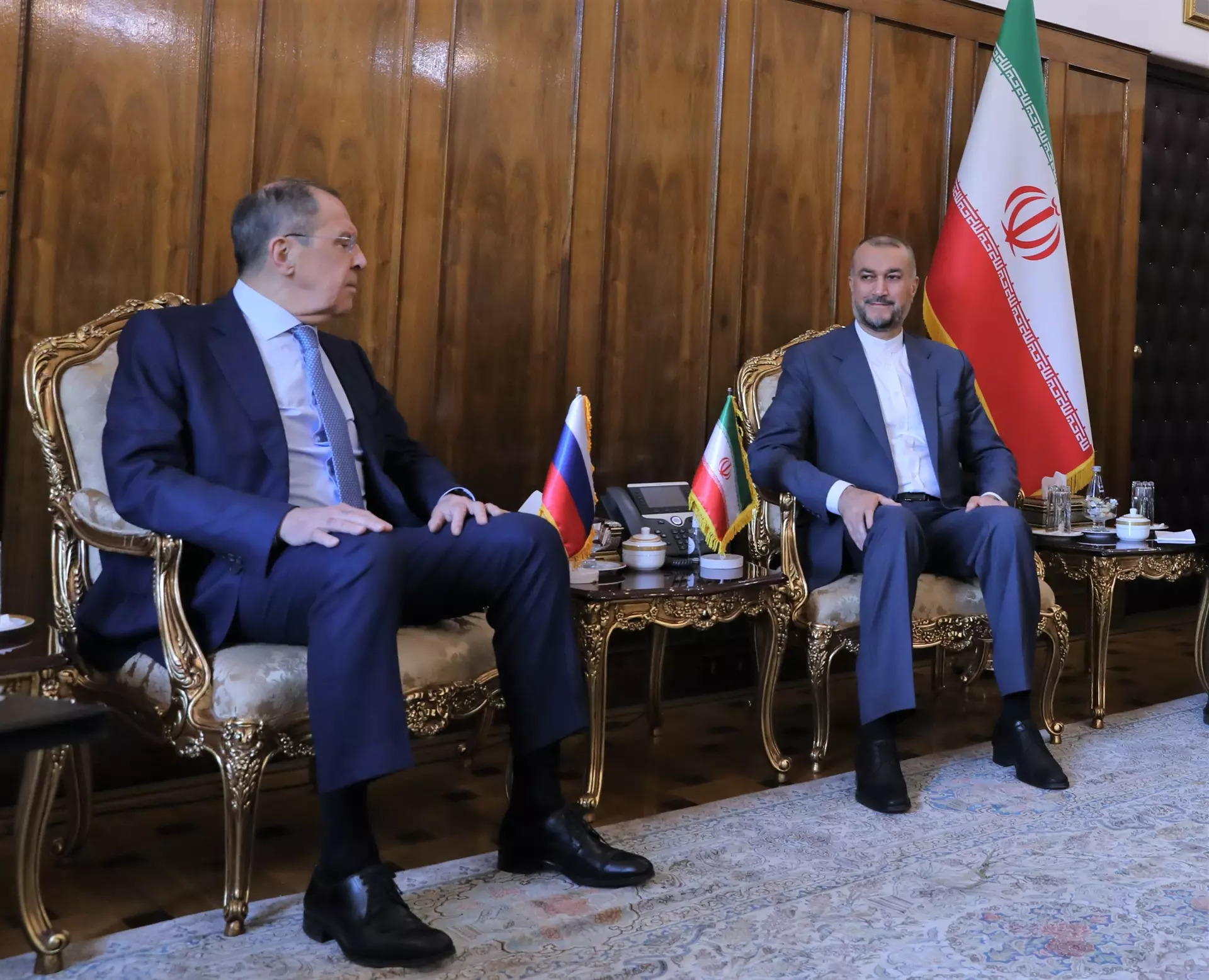 Iranian Foreign Minister Hossein Amir-Abdollahian and his Russian counterpart Sergei Lavrov discussed a broad range of issues of mutual interest in a meeting in Tehran on June 23, 2022. / MFA.gov.ir

Iran's President Ebrahim Raisi said in a recent meeting with the visiting Russian Foreign Minister Sergei Lavrov that Tehran and Moscow are opposed to a foreign military presence in the Caspian region.

Referring to the importance of cooperation between neighbouring countries in the Caspian Sea, Raisi stressed the need to prevent the build-up of any foreign military presence in the region, especially on the coasts of Iran, the Iranian president was quoted by his press service as saying on June 22.

The president stressed the importance of ending the Russian-Ukrainian war as soon as possible and said that Tehran is ready to help find a diplomatic solution for the conflict.

"There is no doubt that the provocative actions of the United States and NATO have been the cause of shaping these conflicts, and therefore, we should act on the efforts aimed at expanding NATO's influence in any part of the world, including in West Asia, the Caucasus, and Central Asia,” Raisi said in a meeting in Tehran.

For his part, the Russian foreign minister referred to dimensions of bilateral cooperation, including economic matters, and stressed his country's readiness and interest in promoting Moscow's cooperation with Tehran to a strategic level.

Highlighting the importance of Iran's membership in the Shanghai Cooperation Organization (SCO), Lavrov reiterated his country's support for Iran's expansion of its role in regional and international organizations.

During his two-day visit to Tehran, Lavrov and his Iranian counterpart Hossein Amir-Abdollahian exchanged views on prospects to boost trade, speed up the implementation of joint economic projects, facilitate bilateral investment, and work together to effectively fight sanctions, especially in the energy markets, in addition to expanding banking and financial cooperation.

They further discussed the upcoming meeting of the three neighbours and the South Caucasus countries as well as the summit of the presidents of Russia, Turkey and Iran within the framework of the Astana process in Tehran, the Iranian foreign ministry’s website reported on June 23.

Referring to the latest developments in Ukraine, Lavrov said that some Western countries have exploited Ukraine in order to advance their policy of unilateralism, and added that their objective is to weaken Russia.

The ministers also held talks about boosting Iran's cooperation with regional and international organizations and forums, including the Shanghai Cooperation Organization, the Eurasian Economic Union and BRICS.

While Moscow is challenging Western sanctions over war in Ukraine, Tehran has been struggling to keep its economy afloat because of the US sanctions that were reimposed after Washington exited Tehran's nuclear deal in May 2018.