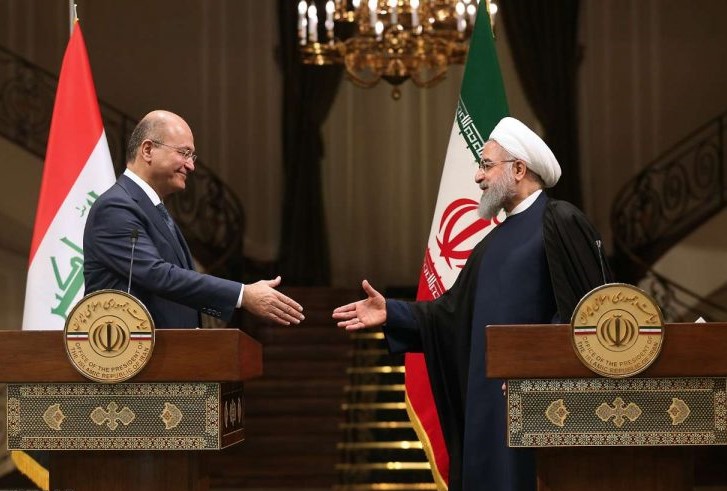 The Iranian and Iraqi presidents have focused this week on the need to develop bilateral economic relations. The sides also stressed the need to end the presence of the foreign troops in the region.

In a phone conversation with his Iraqi counterpart Barham Salih, Iranian President Hassan Rouhani described Iraq as a good friend and neighbor of Iran and stressed the need to develop and deepen relations between the two countries in all fields, especially economic and trade cooperation.

“Tehran and Baghdad can play an important role in regional developments and be influential by developing bilateral and regional cooperation,” Rouhani said, stressing the need to accelerate the implementation of previous agreements, including the Shalamcheh-Basra railway project and the connection of the two countries’ railways.

The Iranian president further said that Tehran considers Iraq’s security as its own and “opposes any foreign interference in the internal affairs of Iraq.”

“The Americans have always played a destructive role in the region, and the presence of American troops in the region has not helped to bring peace and stability in any way,” Rouhani said, adding that the US shows double standard in the fight against terrorism and that its actions on the Iraqi-Syrian border are ambiguous.

In his turn, the Iraqi president said that his government is “determined to seriously pursue and implement all agreements between the two countries in various fields, which will be in the interest of both countries and the region.”

Speaking about the importance of establishing peace and stability in the region, Barham Salih said that the decision of the Iraqi government to end the presence of foreign troops in the country is serious and negotiations have been taken place with the Americans in this regard, which will continue until the final result is achieved.

Iran and Iraq have recently signed a five-year economic cooperation program. Baghdad mainly relies on Iran to get natural gas and electricity. Last December, Iran has reduced gas supplies to Iraq to 22 mcm per day from nearly 50 mcm over arrears of more than $6 billion.

On March 31, the United States has renewed a waiver allowing Iraq to pay for electricity imported from Iran, giving Baghdad 120 days to reduce its energy dependence on Tehran. The waiver was renewed despite U.S. sanctions imposed after former U.S. President Donald Trump pulled out of the 2015 nuclear deal between Iran and world powers.

Iran-backed parties and militias across Iraq have major influence over Iraqi politics, including within the Iraqi government and security forces. In recent years, some military bases housing U.S. troops in Iraq have been attacked several times, and U.S. officials mostly blamed Iran-backed Iraqi Shiite militias for the attacks.

On April 12, the secretary of Iran’s Supreme National Security Council, Ali Shamkhani noted the importance of the law passed by the Iraqi parliament which stipulates the exit of the U.S. military personnel from the country. The statement was made in a meeting with the national security adviser of Iraq, Qasim al-Araji.

Shamkhani also said that there was “reliable intelligence” showing that “the Americans are trying to lay the ground for their continued presence in Iraq, by protecting and transporting Daesh – the Islamic State terror group – forces in different parts of the country.”