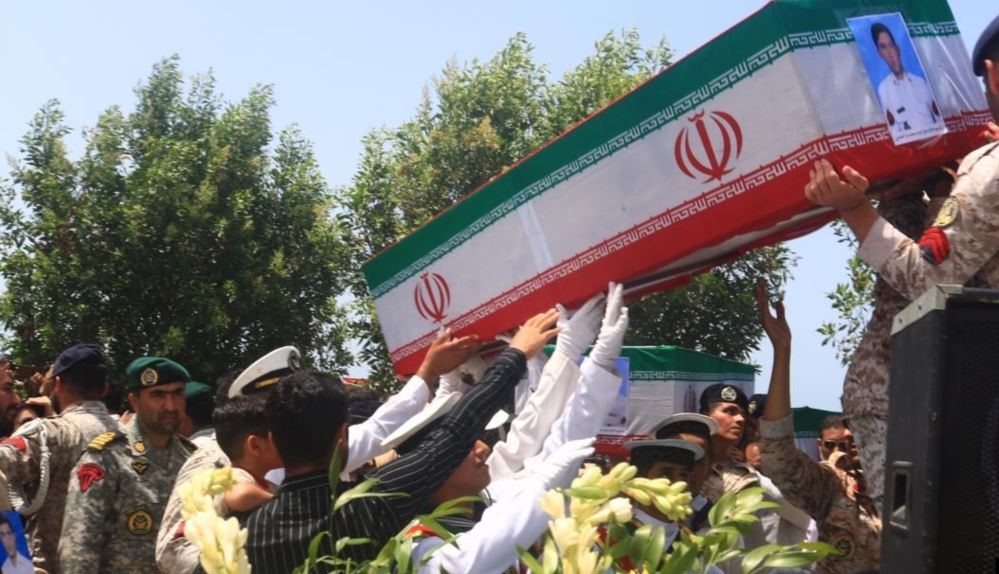 Iran holds funeral for 19 sailors killed in friendly fire during a naval exercise in the Gulf of Oman on May 10, 2020. / Fars News Agency

A funeral ceremony for 19 Iranian sailors killed in an apparent friendly-fire incident during a naval exercise in the Gulf of Oman was held in the country's southeastern province on Tuesday.

The light vessel Konarak had been hit by a new anti-ship missile being tested by the destroyer Jamaran during an exercise two days earlier on May 10 near the Strait of Hormuz, leading to the martyrdom of 19 sailors and injury of 15 others, according to Iran’s Mehr news agency.

The incident happened as a number of Navy vessels were conducting an exercise near the waters lying close to Jask and Chabahar ports that respectively belong to neighboring provinces of Hormozgan, and Sistan and Baluchestan.

“Currently, four expert groups from the General Staff of the Armed Forces, the Ministry of Defense, the Army and the Navy are investigating the incident from the moment it happened,” Chief Commander of Iran's Army Abdolrahim Mousavi said.

Several high-ranking officials including President Hassan Rouhani, Parliament Speaker Ali Larijani, Foreign Minister Mohammad-Javad Zarif and top military commanders have issued statements offering their condolences to the Supreme Leader, the people of Iran and the families of the victims.

On May 12, Leader of the Islamic Revolution Ayatollah Seyyed Ali Khamenei conveyed his message of condolence on the martyrdom of the Navy members in the southern territorial waters, saying that “the tragic incident regarding the vessel of Iran’s Army which led to the martyrdom and injury of a number of the Army’s sailors while striving to maintain and strengthen the country's defense power brought us deep sorrow and grief."

Khamenei also urged responsible officials to investigate “the reason for the mishap precisely and take necessary measures for non-repetition of such tragic incidents."

The Hendijan-class 47-meter support ship Konarak, built in the Netherlands, has been in service since 1988. There were 34 onboard the vessel when the accident occurred. In 2018, the ship was enhanced to launch anti-ship cruise missiles and conduct patrols.

Iran regularly holds exercises in the region, which is close to the strategic Strait of Hormuz, the narrow mouth of the Persian Gulf through where one-fifth of the world’s oil passes through.

In November 2019, Deputy commander of Iran's Army for coordination Admiral Habibollah Sayyari said that the country's navy has provided security for 5,000 of its trade ships and oil tankers in 2,500 km of sea borders in the Gulf of Aden, Bab al-Mandab Strait and the Red Sea to save its economy.