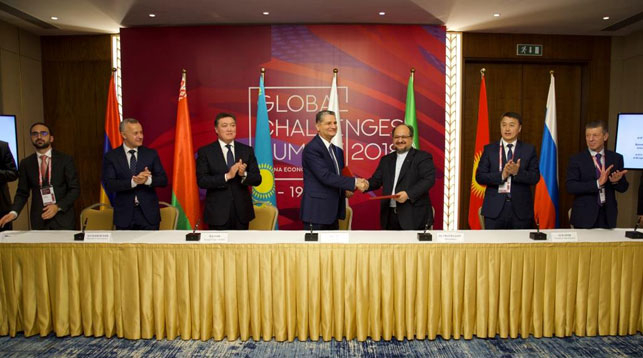 The Eurasian Economic Union (EAEU) and Iran signed an interim agreement on the establishment of a free trade zone, on May 17, 2018. / Belta.by

Iran and the Russia-led Eurasian Economic Union (EAEU) signed an interim agreement on the establishment of a free trade zone, during an economic forum held in Astana, Kazakhstan on May 17.

“The document represents the first stage in the formation of a free trade area [between the EAEU and Iran]. It provides for reduced or zero import customs duties on a wide range of goods. The implementation of the agreement will significantly increase the volume of mutual trade, which last year amounted to 2.7 billion dollars,” Russia’s RIA Novosti reported.

The arrangement will last for three years, to allow for a full-fledged deal on a free trade zone in the future. The temporary agreement will help to boost trade turnover on account of relaxation of current customs regulations.

The agreement affects duties for about five hundred commodity items and involves tariff concessions on virtually all key goods.

The EAEU is an international integration economic Union that was established on the basis of the Customs Union and the common economic space in 2015. Its current members are Armenia, Belarus, Kazakhstan and Kyrgyzstan and Russia, which acts as chair through this year.

According to RT, over 40 countries and international organizations including China, Indonesia and Israel, as well as some South American countries, have expressed interest in a free trade deal with the EAEU. The trade bloc has also held negotiations with South Korea, Egypt and India.

"This is an extra signal to everyone that the Iranian market awaits our businessmen and we will proactively work there,” Vice President of the Russian Chamber of Commerce and Industry Vladimir Padalko told TASS on Thursday.

“The business hopes that the free trade zone agreement will facilitate interaction between entrepreneurs from the EAEU and Iran, receipt of visas to this country, and that the agreement will also promote the transition to settlements in national currencies, because we cannot work with the dollar now in view of U.S. sanctions.”

After U.S. President Donald Trump announced the U.S.’ withdrawal from the 2015 Iran nuclear deal, formally called the Joint Comprehensive Plan of Action (JCPOA), Iran once more faced the threat of economic isolation. Tehran is hoping that by signing an agreement with the EAEU trading bloc, impacts of the sanctions on Iranian commerce will be softened.

In 2017, the EAEU and Iran agreed on a list of goods that is to be delivered to the partner-countries within the agreement. The list for the EAEU includes meat and fat-and-oil products, certain types of confectioneries and chocolate, cosmetics, electronic and mechanical equipment. Iran will enjoy tariff preferences on vegetables, fruits, dried fruits and building materials.

According to Russia’s acting Deputy Prime Minister Dmitry Kozak, the agreement will give a strong impetus to trade and will encourage business activities among the member states, and Russian business will additionally earn about $ 150 million per year, after the ratification of the interim agreement with Iran.

For Iran, EAEU membership represents a new opportunity to expand its economic horizons. Iran and the EAEU members are set to be linked through three intra-state transportation corridors: International North South Transport Corridor, China-EU corridors – which passes through Kazakhstan and Iran – and the new China-Kyrgyzstan-Tajikistan-Afghanistan-Iran corridor.