Iran Calls For Expansion Of Energy, Security Ties With Pakistan 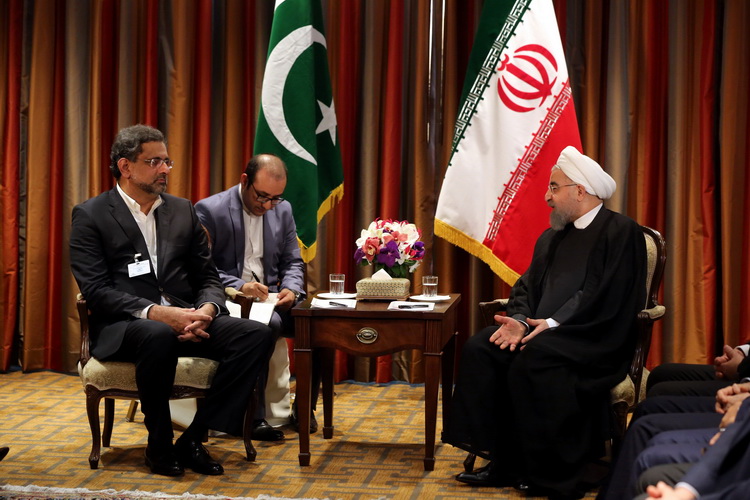 Iran’s president Hassan Rouhani said the country is ready to help Pakistan meet its energy demand, and called for the expansion of economic and security cooperation with what is Iran’s eastern neighbor.

“We are ready to supply energy to Pakistan, and also welcome Pakistani investors in this sphere,” Rouhani said in a meeting with Pakistan’s Prime Minister Shahid Khaqan Abbasi, held on the sidelines of the UN General Assembly in New York on Tuesday evening, according to Iran’s Fars news agency.

Specifically, Rouhani said that Iran is well-poised to export electricity to Pakistan and to construct power plants in the border areas, with funding from third parties. He also referred to the 2,775-kilometre Iran–Pakistan gas pipeline, known as the Peace Pipeline, which is an under-construction.

“We have carried out our part, and in the form of what is huge work, we have taken the gas pipelines to the border of the two countries (Pakistan and India),” Rouhani said.

India has increasingly cultivated positive ties over the decades with officials in Washington, and almost abandoned the pipeline in 2008, following American sanctions against Iran over its nuclear program. Instead, India has pursued a rival pipeline from Turkmenistan, passing through Afghanistan and Pakistan, known as TAPI and short for Turkmenistan–Afghanistan–Pakistan–India pipeline.

Iran has already completed the construction of its segment to the Peace Pipeline, which runs 900 kilometers (559 miles), however Pakistan has fallen short of constructing its 700 km (435 mi) segment.

“I believe that Iran will finally send its gas to Pakistan but considering the lessons I have learned about this issue over the years, I think a third party would be needed for financing and completing Pakistan’s share of the project,” Iran’s Minister of Petroleum Bijan Zangeneh said on September 6.

Iran is actively trying to engage third-party countries for investment in the project to ensure payments, and for Iran to see a return on its investment. Tehran remains concerned that after construction is complete, getting paid for exporting gas will also be a problem, fearing Islamabad will fail to pay its dues to Iran.

During the meeting in New York on Tuesday Rouhani also stressed the need to develop the border areas between Iran and Pakistan, which remain vulnerable to rogue groups and separatists, laying blame on Pakistan for not doing enough.

“Terrorist groups attacking our borders from Pakistan are not in favor of our relations, and we expect the Pakistani government to identify terrorist groups and prevent their activities against Iran,” he added.

Sistan-Baluchistan province in Iran is separate from Baluchistan province in Pakistan, due to national border boundary lines. The region has acted as a base for Balochi nationalist separatist groups. The Pakistani Balochi militias are allied with ethnic kinsmen on the Iranian side, often engaging in kidnapping, terrorism and drug smuggling.

On July 15, three rebel suspects were killed during a skirmish with Iran’s Islamic Revolution Guards Corps in Saravan, a town that lies along the Pakistan border. Earlier this year, on April 26, nine Iranian border guards were killed in a terror attack by members of the Sunni militant group Jaish al-Adl (Army of Justice).

The April attack was not the first against Iranian security forces by Jaish al-Adl, particularly ethnic Baluchis, living in predominantly Shia Iran, where Sunnis are discriminated against. The group has claimed responsibility for other attacks as well, including one that killed eight border guards in April 2015, and another that claimed 14 border guards in October 2013.

Besides Jaish al-Adl, other Sunni rebel groups operating in the border regions of Iran and Pakistan include the Baluch nationalist group Jundallah, and Harakat Ansar Iran, one of two groups that had split from Jundallah. In 2013, the group merged with another faction to form yet another Sunni Baluch militant group called Ansar Al-Furqan.