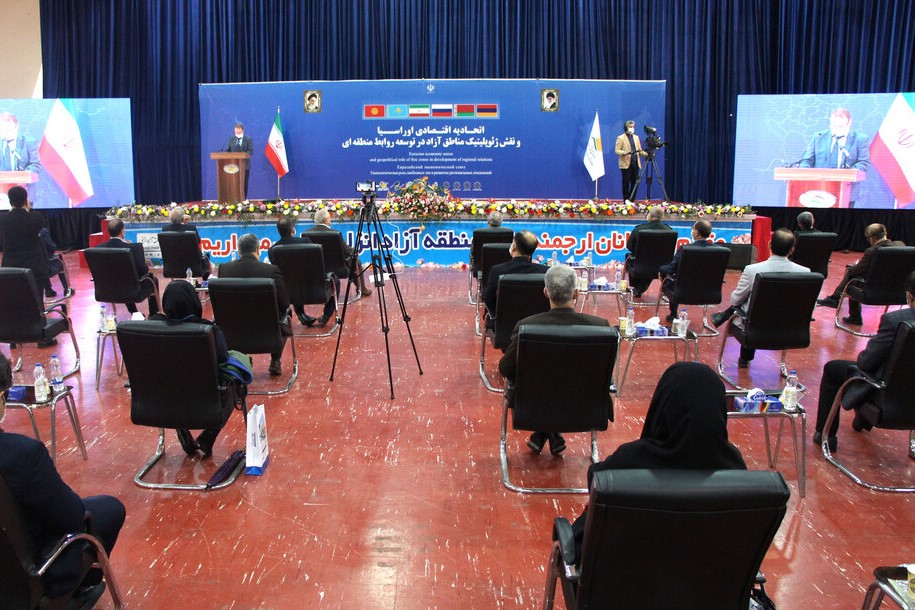 The International Conference of Eurasian Economic Union (EAEU) was held in the northern Iranian port city of Bandar Anzali on November 17 to explore the role of free zones in the promotion of regional relations. / MEHR News Agency

Iran’s Energy Minister Reza Ardakanian has said that his country can play a significant role in strengthening cooperation within the Eurasian Economic Union (EAEU).

“The Islamic Republic of Iran is a strong regional power that needs more integration and convergence in the regional actors, and considering the existing reality, the Eurasian Union can provide us with an opportunity to develop our capabilities,” the minister said in a video message to an international conference dedicated to “the EAEU and the geopolitical role of free trade zones in regional development” on November 17.

The role of free zones in the promotion of regional relations and the problems facing economic activists for customs cooperation with the EAEU member states were discussed in the one-day conference in the northern Iranian port city of Bandar Anzali. It is hosted by Anzali Free Zone Organization.

Ardakanian who is charged with coordinating the implementation of the temporary free trade agreement with the EAEU, highlighted Iran’s special place in the region and its perfect transportation and transit capacities, saying the country can play a significant role in strengthening cooperation within the union.

“If a higher level of regional unity, cooperation and convergence is reached at this union, it has the potential to turn into one of key economic and even political hubs of the world,” the minister said and added that closer cooperation with the EAEU, stronger economic interaction and increased trade could help ensure stability and security in the region.

In June 2019, the Iranian parliament ratified an agreement that allows the administration to join a free trade zone with the EAEU countries. The agreement, signed in Kazakhstan in May 2018, sets the main rules of trade between the EAEU, Iran and those of the World Trade Organization (WTO), of which Iran is not a member.

The free trade zone is planned to be in effect for four years, under which the EAEU will grant Iran tariff concessions on more than 500 items. Russia’s State Duma and the Federation Council had ratified the agreement to establish Iran-EAEU free trade zone in November 2018.

The agreement has increased Iran’s exports to the EAEU member states, and it is a turning point for Tehran in terms of boosting non-oil exports during the US sanctions. Russia has been the largest importer and exporter to Iran among the five EAEU member states (Russia, Belarus, Kazakhstan, Armenia and Kyrgyzstan).

Iran’s trade with the member of the Eurasian Economic Union between March 19 and August 21 in 2020 stood at $2.791 billion, marking a six percent increase compared to the corresponding period last year, according to the Iranian Customs Administration’s data.

Iran and EAEU members started to develop the agreement on free trade in 2015, though the signing was postponed several times. The member states have several incentives to integrate within the EAEU, which also include obtaining gas and oil from Russia at reduced prices, providing access to individual liquid goods on the capacious Russian market and ensuring the cross-border movement of labor resources.