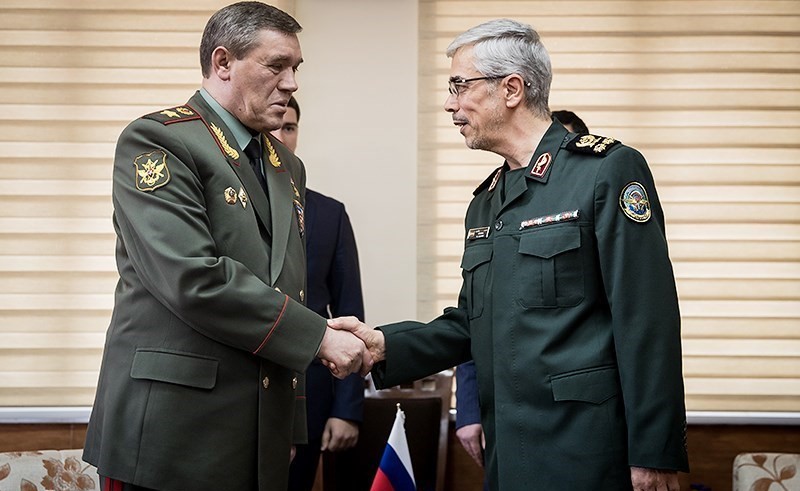 Chief of Staff of the Iranian Armed Forces Major General Mohammad Hossein Baqeri held a meeting with Chief of the General Staff of the Armed Forces of Russia Valery Gerasimov on October 18, 2021. / Tasnim News Agency

Addressing a meeting at Iran's embassy in Moscow on 18 October, Baqeri said that after the UN arms embargo on Iran expired in October 2020, Iranian government signed deals with Russia for the purchase of fighter and training aircraft along with attack helicopters.

"The deals were forged after the Iran arms embargo expired. During this trip, we will negotiate their implementation," Iran’s Tasnim news agency quoted the Iranian general as saying.

The Iranian arms embargo was lifted on October 18, 2020, under United Nations Security Council Resolution 2231, which endorsed the 2015 nuclear agreement, officially known as the Joint Comprehensive Plan of Action (JCPOA).

“The purpose of the visit was to outline the state of cooperation and joint defense and military relations between the two countries, as well as the latest developments in regional and international developments and the fight against terrorism,” Baqeri said.

He said that Iran needs "a roadmap to have strong relations with countries, especially Russia and other neighboring countries". Referring to Iran's 25-year strategic partnership deal with China, Baqeri said that establishing a similar agreement with Russia would be favorable.

In a meeting with Chief of the General Staff of the Armed Forces of Russia Valery Gerasimov on October 18, Baqeri said that “the military and defense relations have grown remarkably in recent years," adding that he hopes that "the growing course of cooperation would continue”.

Gerasimov said that Moscow and Tehran have similar approaches toward key issues of global and regional security, adding "our positions coincide on most key problems on the regional and global agendas".

Iran and Russia have maintained a strong alliance in recent years as both countries support Syrian President Bashar al-Assad’s government against various opposition and militant groups.

In August, Iran’s President Ebrahim Raisi described efforts to enhance and strengthen relations with Russia as a top priority in his administration’s foreign policy, assuring his Russian counterpart of Tehran’s serious resolve to finalize a comprehensive cooperation deal with Moscow.

In early October, the Russian Ambassador to Tehran Levan Dzhagaryan said that his country recognizes expiration of UN arms sanctions against Iran on October 18, 2020, and is ready to supply the country with its S-400 air defense system.

In November 2016, Russia completed delivery of the S-300 air defense missile system to Iran, concluding an $800 million deal signed between the two states in 2007. In September 2010, following pressure from the United States and Israel, Russian President Dmitry Medvedev suspended the agreement in compliance with a stricter UN arms embargo passed in June of that year.

Iran protested the decision, filing a $4 billion lawsuit against Russia’s defense export agency and embarking on the manufacture of its own version of the S-300 missile system, named Bavar 373.

According to Iranian commanders, the long-range, mobile air defense system Bavar-373 is similar to its original Russian model and traces and intercepts high-altitude targets. The S-300 mobile surface-to-air missile system can counter multiple aircraft at a range of 195 kilometers and ballistic missiles at a range of up to 50 kilometers.

Since the sale of the S-300 system, Russian state news services have reported that Iran and Russia plan to negotiate a $10 billion deal to supply arms to Iran, which includes artillery systems, helicopters, planes and T-90 tanks.