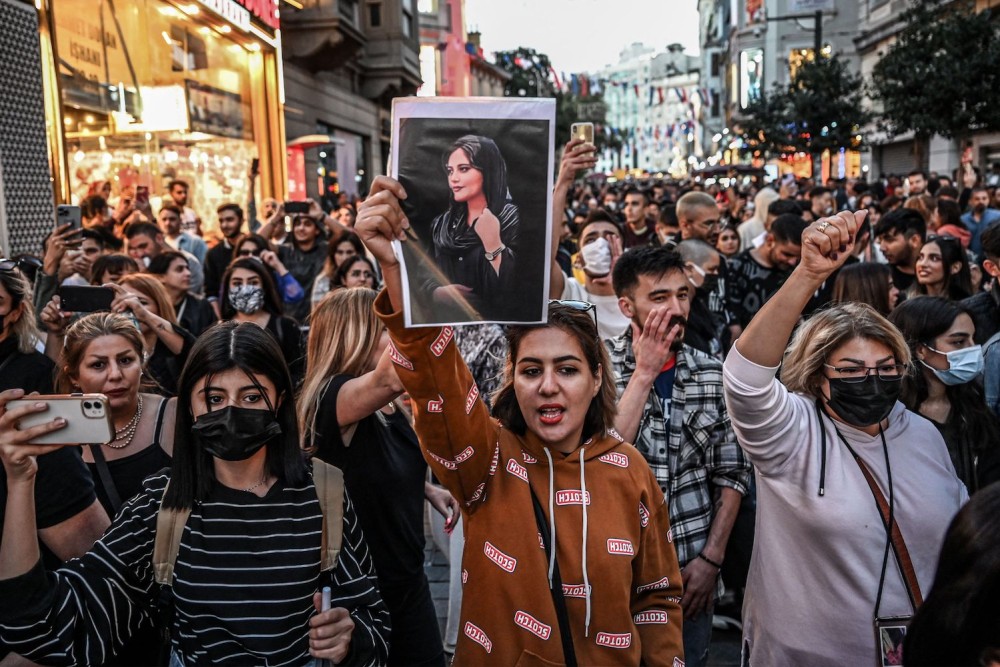 A protester holds a portrait of Mahsa Amini during a demonstration on Istiklal Avenue in Istanbul on September 20, in support of widespread protests in Iran. / AFP/Getty Images

Iranian Foreign Ministry Spokesman Nasser Kanani has accused the Western states and media of supporting the ongoing protests over the death of Mahsa Amini.

"In the recent riots, political leaders of America and, sometimes, Europe, as well as their media and hostile Persian-language outlets backed by the West abused a sad event that is being investigated, and went the extra mile in support of rioters and disruptors of national security under the pretext of support for human rights," the spokesman said in an Instagram post published on September 26.

The ethnic Kurdish woman Mahsa Amini, 22, was arrested by Iran's morality police on September 13 due to her "improper appearance" contradicting Sharia rules before supposedly falling into a coma and dying in a hospital in Tehran on September 16. Iranian police attributed her suddenly falling ill due to "heart problems", meanwhile, social media users believe that Amini fell into a coma as a result of abuse by police while in detention. After her death, Iranian President Ebrahim Raisi ordered the Interior Ministry to conduct an inquiry into the events.

Over 40 people have been killed in the protests that flared up after Amini's death, including security forces suppressing the protests, according to the state media. More than 1,200 protesters who participated in "attacking" military centers, "damaging" public property, and "inciting" unrest have been identified and hundreds of them have been arrested so far.

On September 24, in a phone call with the family of a Basij member, Mohammad Rasool DoustMohammadi, who was killed during the protests in the north-eastern city of Mashhad, President Raisi emphasized the need to deal decisively with the disruptors of the security and peace of the country. He stressed the need to distinguish between protest and disruption of public order and security, and described the occurrence of events that led to the death of DoustMohammadi as “rioting and evil.”

The unrest in Iran erupted at a time when the Iranian people were suffering from Western-imposed sanctions and economic mismanagement by the government has reportedly left the economy in tatters.