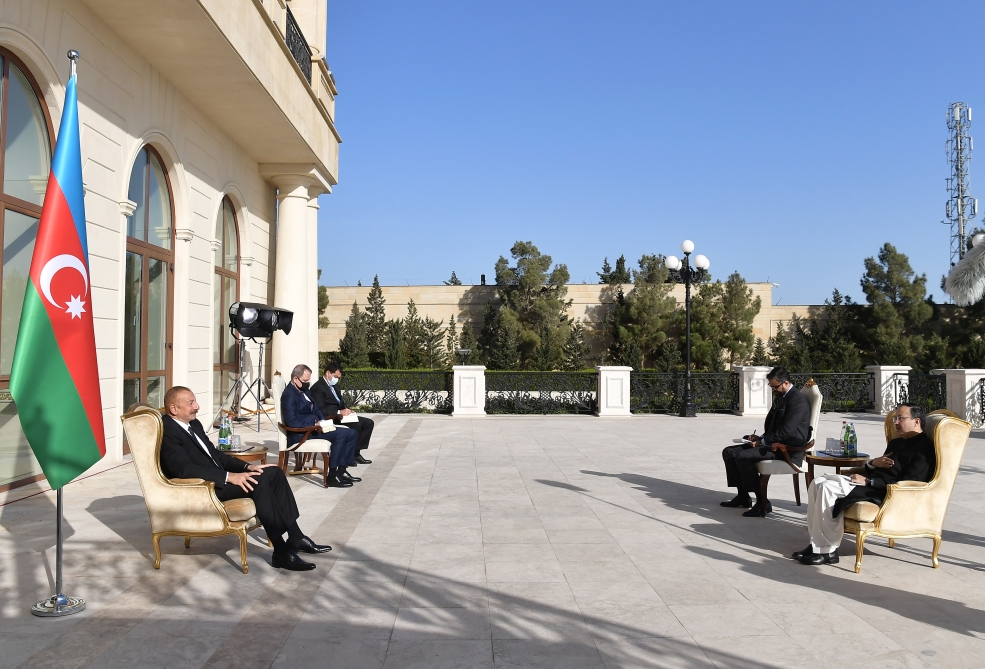 President Aliyev highlighted the fact that the Armenian occupation policy and aggressive behavior once again "demonstrate the fascist nature of the Armenian criminal regime." / Azertag

"On 27 September, they (Armenia) began to attack our villages and military positions from different directions, and we suffered casualties among civilians over these two days," President Aliyev said on Tuesday as he received the credentials of the newly-appointed Pakistani Ambassador to Azerbaijan Bilal Hayee, according to Azertag.

So far, Armenia's armed forces have killed at least 14, including five members of one family, and injured 46 civilians in Azerbaijan in the past four days of heavy clashes. There is no official information about a number of military casualties in Azerbaijan.

President Aliyev highlighted the fact that the Armenian occupation policy and aggressive behavior once again "demonstrate the fascist nature of the Armenian criminal regime." He went on to add that as a result of the counter-offensive, which was launched in the response to Armenian attacks, the Azerbaijani Army has liberated some occupied territories of Azerbaijan.

On 27 September, tensions between the two South Caucasus countries escalated for the second time this year after Armenia's forces deployed in the occupied Azerbaijani lands targeted Azerbaijani civilian settlements and military positions along the front zone in the occupied Nagorno-Karabakh region, an internationally recognized territory of Azerbaijan. In July, Armenia's troops attacked Azerbaijani positions with artillery fire, violating a ceasefire agreed in 1994.

Four UN Security Council and two UN General Assembly resolutions, as well as many international organizations, demand the immediate withdrawal of the occupying forces from Azerbaijani lands and return of internally displaced Azerbaijanis to their ancestral lands, however, Armenia chose not to comply with any of the legally binding documents.

Azerbaijani president blames Pashinyan's dictatorial regime for posing a threat to peace and security in the region, by ignoring UN Security Council resolutions and fueling tensions with Baku through provocative actions and illegal settlement policy, which altogether hamper the peace process over the Nagorno-Karabakh conflict.

The Azerbaijani president brought into focus Pashinyan's provocative rhetoric about Nagorno-Karabakh during his visit to the occupied Azerbaijani lands in August 2019 as an example of Armenia's provocative actions and policies against Azerbaijan.

Additionally, President Aliyev mentioned Pashinyan's proposal for adding the puppet regime in the occupied Azerbaijani lands as a party to the talks of a political settlement between Azerbaijan and Armenia – a position that is unacceptable to Baku.

"He (Pashinyan) says that Azerbaijan should negotiate with the puppet regime of Nagorno-Karabakh, which means changing the format of negotiations," President Aliyev added.

"They organize military training in the occupied territories. They organize the so-called swearing-in ceremony for the fake leader of the criminal regime in Nagorno-Karabakh, in Shusha, which is an ancient city of Azerbaijan. They decide to move the so-called parliament of the criminal junta of Nagorno-Karabakh to Shusha and think that we will tolerate that," President Aliyev continued.

"This is a direct insult to the feelings of the Azerbaijani people. We will never agree to this and show them their place. If the international community cannot stop this mindless dictator, Azerbaijan will stop him. Azerbaijan will show them where they belong and restore its territorial integrity."