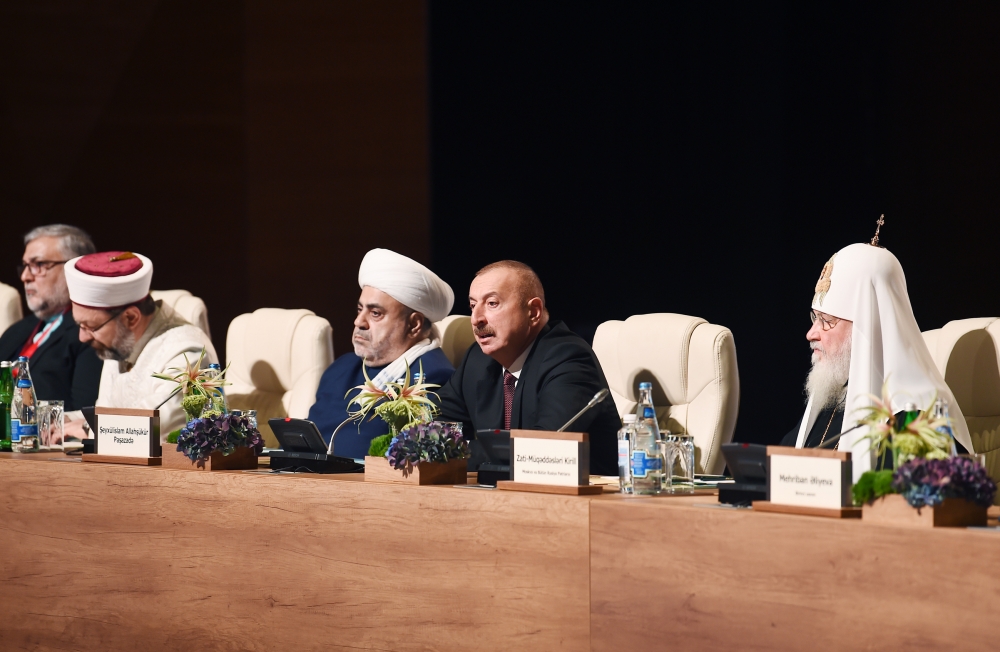 “I consider it natural that such an authoritative event is being in Baku because Azerbaijan has ancient interreligious traditions. Irrespective of the public and political system, Azerbaijan has always proved to be an exemplary country in this regard. Representatives of all religions, all ethnic groups have lived in our country for centuries like one family in peace, friendship, and mutual understanding,” President Aliyev said at the event, according to his official website.

The two-day summit held in Azerbaijan’s capital city concluded yesterday Friday, bringing together representatives of more than 70 countries, including leaders and representatives of various religions, religious movements and international organizations. The list of attendees included the head of the Russian Orthodox Church Patriarch Kirill.

The event was organized by the Caucasus Muslims Office and the government of Azerbaijan. The role of religious leaders in the fight against terrorism, aggression, xenophobia, Islamophobia, anti-Semitism and Christianophobia, as well as how religious leaders can protect the rights of women and children, were the focus of this year’s forum.

Promoting a multireligious identity has been a key part of Baku’s strategy to demonstrate moderation, tolerance and diversity in a country of 10 million, where nearly 97 percent are Muslim.

Three percent of Azerbaijan’s population are Christian; less than 0.2 percent are Jews; and 0.2 percent are either unaffiliated with any religion or belong to a minority religious group. Currently, more than 2,000 mosques, 13 churches, and seven synagogues are operating across the Caspian region country.

Christians come in various branches in Azerbaijan, including Orthodox, Catholic, Protestant and Lutheran denominations, as well as the Caucasian Albanian-Udi Christian Community based in Nij and Oghuz.

The number of Jews living in Azerbaijan as of 2016 was estimated to be around 30,000 – not a large number, but not insignificant in a Muslim-majority country that stands out as an example of tolerance. Caucasian Mountain Jews, as they are called, have lived in Azerbaijan since the 5th century, when Jews from Persia and possibly the Byzantine Empire were thought to have moved northeastward and settled in the region.

“We can clearly see and follow in the media that numerous negative facts, conflicts, confrontations, wars and bloodshed occur on religious and ethnic grounds. Unfortunately, crimes are sometimes committed under pseudo-religious slogans. We need to consolidate our efforts in this direction,” President Aliyev said.

Since 1980, the world has seen an increase in terrorist activities motivated by religion. Some experts believe terrorist acts in the name of religion and ethnic identity have become one of the most important security challenges faced following the end of the Cold War.