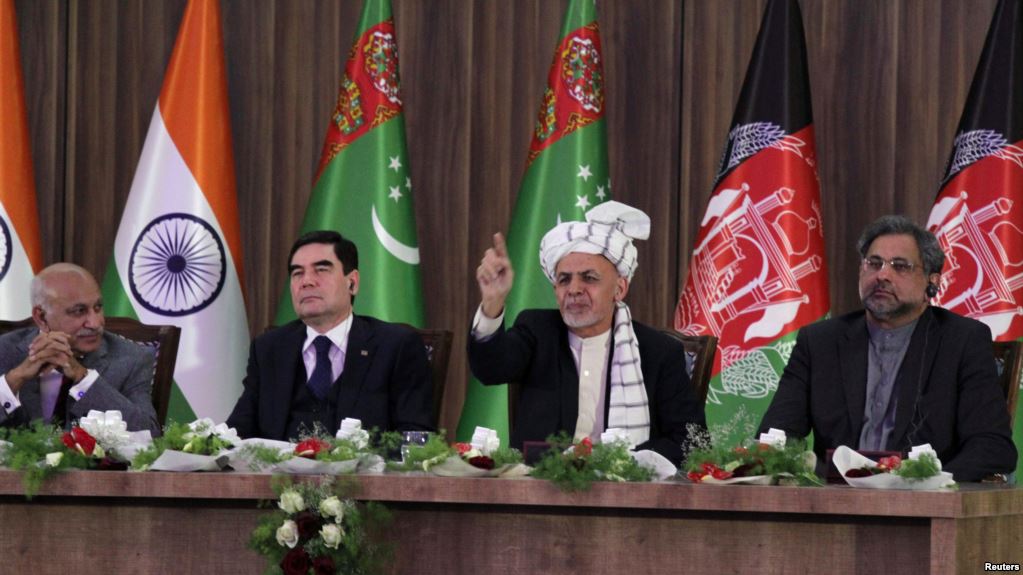 The construction of an ambitious and long-awaited international gas pipeline that extends from Turkmenistan to India via Afghanistan and Pakistan and abbreviated ‘TAPI’, moved forward last week when leaders from the four countries met and observed a symbolic welding of pipes at the crossroads of the Turkmen-Afghan border.

The pipeline will measure 1,814 kilometers (1,130 miles), and carry gas from the Galkynysh field in Turkmenistan, which has over 26 trillion cubic meters of gas reserves.

On February 23, work started on the 774 kilometer-long second leg of the project, which is expected to cost around $10 billion once it’s complete and will pass through war-torn Afghanistan.

“A new chapter of economic growth and regional connectivity starts right here in the economic and cultural hub of Afghanistan,” President Ashraf Ghani tweeted in English on February 22 after arriving at Herat ahead of the ceremony marking the start of the construction of the Afghan section of TAPI.

The first leg of the pipeline took two years to build, having begun in December 2015, and measures 214-kilometers.

Once completed, TAPI will ship 33 billion cubic meters of gas from the Galkynysh mega deposit in Turkmenistan’s Mary province to consumers in Afghanistan, Pakistan and India. Afghanistan is planning to take five billion cubic meters, with India and Pakistan around 14 billion each. The three countries committed themselves to the project despite the tensions that New Delhi and Kabul have with Islamabad.

The third segment of TAPI, from Afghanistan to Pakistan, will stretch 826 kilometers before the final destination in the Indian city of Fazilka, located on the Pakistani border. Work on this final segment has not yet begun.

Turkmenistan sits on the world's fourth-largest natural gas reserves, and is heavily dependent on gas exports to China, after Russia cut back on its imports and Iran refused to buy it due to price disputes in 2016 and 2017.

The Galkynysh gas field was opened in 2006 and is part of a cluster of gas fields of South Iolotan, Osman, Minara and Yashlar run by the state-owned National Gas Company of Turkmenistan.

Turkmenistan, hit badly by plummeting energy prices, has long drumming up both political and financial support for the pipeline and got it from the U.S., the Asian Development Bank and Saudi Arabia.

The U.S. has long advocated the pipeline as a source of much needed gas to all three countries over an alternative pipeline, which is also being negotiated, to bring gas from Iran through Pakistan into India.

“Congrats on today’s groundbreaking ceremony in Herat for the Turkmenistan-Afghanistan-Pakistan-India Pipeline! This bold initiative will energize regional cooperation, provide power and jobs for the #Afghan people, and become an important source of revenue for #Afghanistan. #TAPI,” US ambassador to Afghanistan John R. Bass wrote in a tweet on 23 February.

On February 23, Presidents Ghani and Berdimuhamedov also launched the laying of 500kW power transmission and fiber-optic lines along the route Turkmenistan-Afghanistan-Pakistan (TAP) as well as the Serhetabat-Turgundi railway line between the two neighboring nations, in order to ferry workers and construction materials for the Afghanistan segment of the project.

Also the first train loaded with oil products, foodstuffs, industrial and construction materials manufactured in Turkmenistan headed to the Afghan province of Herat from the Serhetabat railway station on the Turkmen border was launched.

Afghanistan is expected to earn some $500 million annually in transit duties, with thousands of jobs to be created for jobless people of the war-torn region. The underground pipeline will pass through the areas along Afghanistan's Herat-Kandahar highway, then via Quetta and Multan in Pakistan, and end up at the India-Pakistan border town of Fazilka.

Although the gas pipeline would mostly stretch through areas of Afghanistan where the Taliban have a strong presence, Taliban spokesman Zabihullah Mujahid confirmed that his movement was ready to guarantee the pipeline's security.

"We are ready to protect TAPI. It is good and important and vital for the economy of Afghanistan," he said, noting the pipeline had been under consideration during the Taliban rule that ended in 2001.