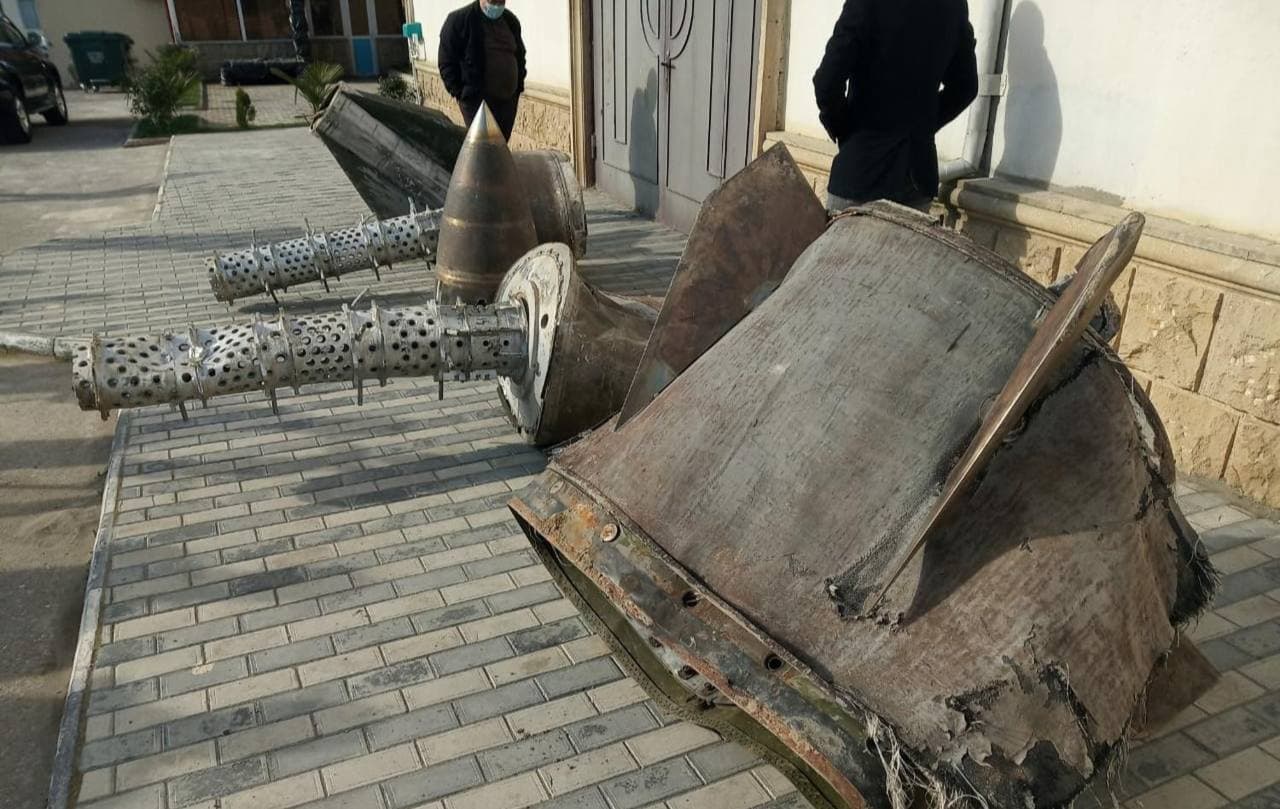 Representatives of ANAMA put the wreckages of Iskander missiles on display in Baku, Azerbaijan, April 2, 2021 / Courtesy

News about the launch of a Russia-made Iskander ballistic missile on Azerbaijani territory by Armenia's forces has resurfaced after an official at the Azerbaijan National Agency for Mine Action (ANAMA) confirmed on Wednesday that debris of the rocket was found in the outskirts of the Shusha city in the Karabakh region.

A representative of ANAMA, Gadir Namazaliyev said the mine and ammunition clearance operations in Shusha revealed fragments of two exploded missiles that have been launched during last year’s Armenia-Azerbaijan war.

“During a check by the agency's specialists of the identification number (9M723) of the missile, it was established that its wreckage belonged to the Iskander missile system. Even an open search on Internet resources can determine that the identification number 9M723 belongs to the Iskander missile,” Namazaliyev said, adding wreckages of the missile have been found in different three locations in Shusha.

Representatives of ANAMA put the fragments of the Russia-made rockets on display in capital Baku on Friday. Head of the operative quarters at ANAMA, Idris Ismayilov said the agency could not set the date and location of the missile’s launch by Armenia, however, a special radar observation could disclose the trajectory.

The Russian-made 9K720 Iskander, which is also known as SS-26 Stone in NATO reporting name, is a road-mobile short-range ballistic missile (SRBM) with a range of up to 500 kilometers. The system deploys both 9M723 ballistic and 9M728/29 cruise missiles. The Iskander supports different conventional warheads such as a cluster munitions warhead, a fuel-air explosive enhanced-blast warhead, a high explosive-fragmentation warhead, an earth penetrator for bunker-busting, and an electromagnetic pulse device for anti-radar missions, as well as nuclear warheads. Armenia has reportedly received the first batch of Iskander missiles from Russia in September 2016.

The missile wreckages found in Shusha reportedly belong to an M-type Iskander system, which is not possessed by Armenia's military. In Armenia’s arsenal, there are E-type (Э) rockets classified as “export ware” by the manufacturer in Russia. The strike range of the E-type Iskander is 200-280 kilometers, while the M-type projectile can fly up to 500 kilometers. The Iskander-M missile is listed in the arsenal of the Russian army.

Baku-based political analyst Farhad Mammadov said the main questions about the case are Armenia’s possession of the Iskander-M modification instead of the more simplified version of Iskander-E and the launch of the rockets by the Armenian or Russian military.

“The Russian side should speak on all these issues, making it clear, because the use of this missile system was a matter of principle both during [Azerbaijan’s] Patriotic War of 2020 and in general over the past years,” Mammadov explained.

The debate around the use of the Russian Iskander missile by Armenia for striking Azerbaijan first sparked in November when a former Armenian army chief, Movses Hakobyan, admitted to the use of the rocket during the war. In February, Armenia’s Prime Minister Nikol Pashinyan confirmed Hakobyan’s remarks by saying that the Armenian military fired the Russia-made missile in the last days of the war, but it did not explode or explode by 10 percent. During the last year’s 44-day war in Azerbaijan’s Karabakh region, Armenia reportedly had at least four Iskander missile systems in service.

Officials in Moscow have immediately dismissed Pashinyan’s remarks which stirred a storm of criticism in Russia. The pro-Kremlin political circles blamed the Armenian PM for lying about the capabilities of the “highly precise” Iskander rocket.

Meanwhile, a video that went viral on the media on November 9, a day before the end of the Armenia-Azerbaijan war in the Karabakh region, has reportedly demonstrated the launch of the Russian-origin ballistic missile accompanied by the applause and chants of the Armenian servicemen.

“Quality is low but it clearly is an Iskander TEL and not a Tochka (the only other solid-propellant ballistic missile Armenia operates),” Berlin-based open-source intelligence analyst Fabian Hinz said about the video.

“It is quite plausible that Armenians have tried to target Baku with an Iskander as a last resort to put pressure on Azerbaijan for a ceasefire,” he told the Middle East Eye. "The use of Iskander matches with Armenia's intra-war deterrence efforts as they were overwhelmed by Azerbaijani technological superiority in the battleground.”

Armenia and Azerbaijan fought last autumn the second bloody war in the latter’s Karabakh region over the past 30 years. Azerbaijan's Karabakh region fell under Armenia’s illegal occupation in the wake of the first bloody war in 1991-1994 that ensued after the collapse of the Soviet Union. As a result, Armenia occupied 20 percent of Azerbaijan’s internationally recognized territory. Over 30,000 ethnic Azerbaijanis were killed, one million were expelled from those lands in a brutal ethnic cleansing policy conducted by Armenia, while nearly 4,000 went missing.

The decades-old tension between the two countries spiraled on September 27 last year with the bombardment of Azerbaijani positions by the Armenian forces deployed in the once occupied regions of Azerbaijan. The military of Azerbaijan took adequate countermeasures for pushing back the attack. The war ended in a tripartite ceasefire statement signed on November 10 by Armenia, Azerbaijan, and Russia. By this time, Azerbaijani forces liberated more than 300 settlements, including the cities of Jabrayil, Fuzuli, Zangilan, Gubadli, and Shusha, from nearly 30-year-long illegal Armenian occupation. Armenia also returned the occupied Aghdam, Kalbajar, and Lachin districts to Azerbaijan by December 1 as part of the obligations it took under the ceasefire deal. Russia assumed the peacekeeping role by deploying 1,960 servicemen in the region.