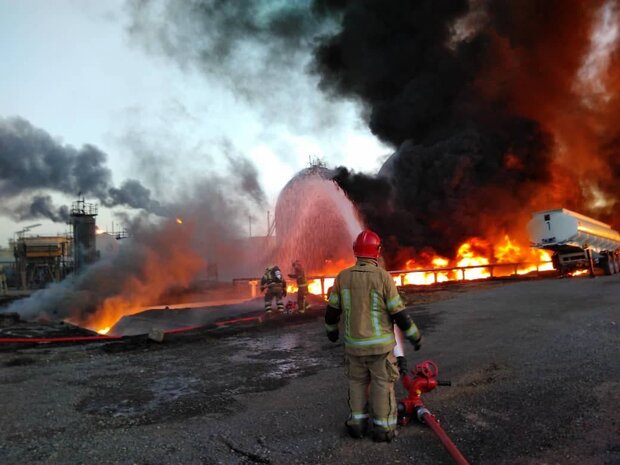 Fires have broken out at numerous industrial sites in Iran in the last two months. Several experts suggest that some of these incidents were acts of sabotage. / MEHR News Agency

At least five people have been killed and four more injured in a fire that broke out in a furniture-making workshop in southern Tehran on July 15.

“One of the night guards at the furniture workshop, who tried to escape, was arrested by the police,” Mehr News Agency quoted Mohammad Nazari, a chief of Tehran’s crime prevention police, as saying.

The cause of the fire is still undetermined, according to Nazari.

Meanwhile, there have been a series of explosions and fire incidents in Iran over the last two months.

On July 13 and 14, a fire broke out at two petrochemicals complexes in Iran’s south-western province of Khuzestan.

Hot weather caused a waste dump at the Tondgouyan petrochemical facility in Mahshahr County to catch fire on July 13. The fire has been extinguished, and no one was injured. Another petrochemicals plant Amir Kabir also located in Mahshahr, caught fire the following day. No deaths were recorded there, as well.

On July 7, a fire broke out in warehouses that stored various goods, including cosmetics and home appliances, near the Iranian capital. According to Jalal Maleki, spokesman for the Tehran Fire Department, the warehouses, which covered about 600 to 700 square meters, were partially demolished due to the huge fire that engulfed the area.

A fire also broke out at a food and beverage manufacturing company “Behnoush” in Tehran Province on June 7. Rising temperature is believed to be the cause of the incident.

On June 5, a fire started at a steel factory in Iran’s southeastern Kerman Province.

“The overflow of molten material was the reason behind the fire at the factory,” the governor of Zarand County, Ali Sadeqzadeh, told Fars News.

On June 2, a fire erupted at the south Tehran oil refinery, and as a result, at least four crude oil storage units in the facility were set alight. The head of the refinery’s public relations department has denied any suggestion that the fire resulted from sabotage.