First 50K Azerbaijanis Have Been Vaccinated for COVID-19 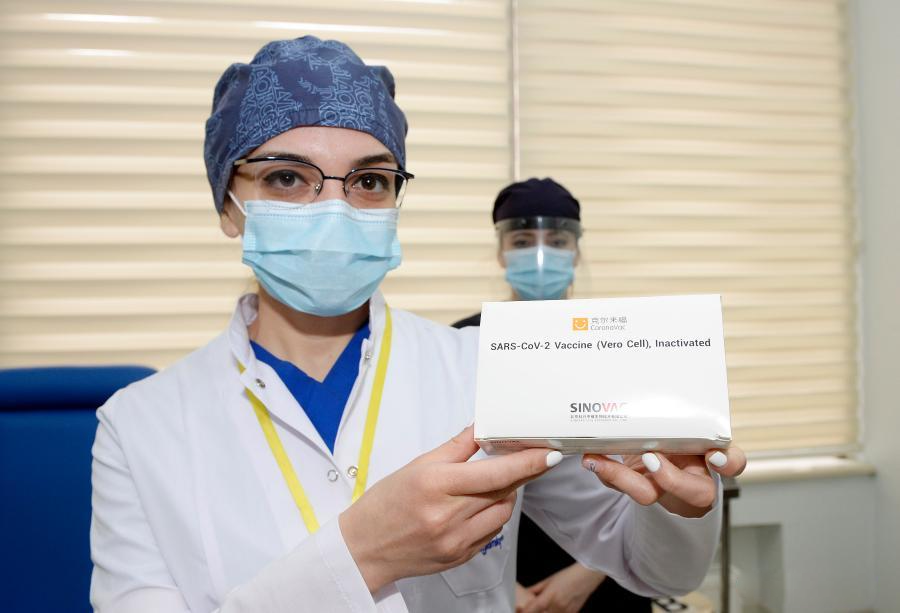 A medical worker with the Chinese-made CoronaVAC vaccine at a hospital in Baku, Azerbaijan. / Tofik Babayev / Xinhua

The government of Azerbaijan has announced that the overall number of people vaccinated against COVID-19 in Azerbaijan over the last ten days reached 0.5 percent of the country’s ten million population.

According to the Cabinet of Ministers of Azerbaijan, 50,000 people had received their first doses of the Chinese-made CoronaVAC vaccine as of Thursday, with most of them being healthcare workers. Those vaccinated should be observed for 30 minutes following vaccination and receive “vaccination passports” after getting the second dose.

The state-sponsored inoculation of medical workers in Azerbaijan will continue with vaccination of the residents aged 65 and over, as well as the staff involved in anti-epidemic activities by law inforcement agencies starting on February 1. The inoculation is voluntary and funded by the government.

Azerbaijan placed an order for four million doses of the CoronaVAC vaccine manufactured by the Chinese SinoVac company. The vaccines are delivered to Azerbaijan in stages. Under the agreement signed between Baku and Ankara, the vaccines go through laboratory inspections in Turkey before arriving in Azerbaijan. Two million people or one-fifth of the country’s total population are expected to get two doses each to complete their vaccination.

Azerbaijan had also joined COVAX, a campaign co-led by the vaccine alliance Gavi, the Coalition for Epidemic Preparedness Innovations (CEPI), and the World Health Organization (WHO). The initiative is set to accelerate the development and manufacturing of COVID-19 vaccines and ensure that every country in the world has fair and equitable access to immunization. Two million doses of vaccine for one million people will be delivered to Azerbaijan within the multilateral COVAX platform by April. At the same time, the country's government may activate the option for getting an additional two million doses.

Officials from the Management Union of Medical Territorial Units (TABIB) earlier said that late-stage trials of the CoronaVAC vaccine revealed it to be 92 percent effective. According to TABIB, this vaccine contains inactivated viruses that have been grown in artificial culture and then killed to destroy disease producing capacity.

Meanwhile, Hande Harmanji, a representative of the WHO’s in Azerbaijan, said the country is set to bring in the Pfizer-BioNTech vaccine as well.

The Centers for Disease Control and Prevention under the US Department of Health and Human Services say evidence from clinic trials found Pfizer-BioNTech was 95 percent effective at preventing laboratory-confirmed COVID-19 illness.

The first SARS-CoV-2 case was detected in Azerbaijan in February 2020, and since then, 230,066 people have been infected, while the number of fatalities stood at 3,126 as of January 30.