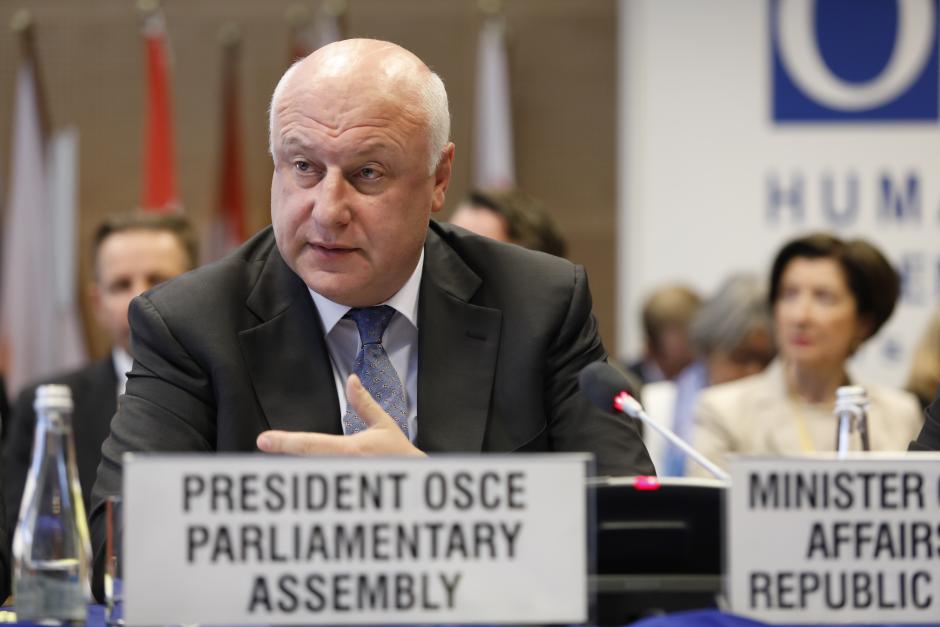 Ending the protracted conflict between Armenia and Azerbaijan over the Nagorno-Karabakh region, which is an internationally recognized territory of Azerbaijan, is widely considered essential to enduring, durable peace in the South Caucasus region. At a gathering of foreign ministers in Slovakia’s capital of Bratislava last week, the issue took center-stage, as solving one of the world’s long-lasting conflicts drew participants’ attention.

George Tsereteli, President of the Parliamentary Assembly of the Organization for Security and Cooperation in Europe (OSCE), weighed in on the Nagorno-Karabakh conflict, describing it as causing pain to Europe since the conflict erupted over 25 years ago.

“For resolving the conflict there must be mutual understanding as a means of peaceful settlement of the conflict,” Tsereteli said according to Vestnik Kavkaza, adding that meetings between high-ranking officials from Azerbaijan and Armenia should always be welcomed.

“I believe that the conflict that began decades ago and is painful for Europe should be resolved. First of all, the peoples of the South Caucasus are interested in resolving the conflict between Azerbaijan and Armenia. These meetings are valuable, and I’m absolutely sure that this context is important.”

The ministerial held from December 5-6 included the foreign ministers of Azerbaijan and Armenia, who discussed the Nagorno-Karabakh conflict for more than three and a half hours, according to reports from Azerbaijan’s foreign ministry. The ultimate outcome of the meeting was an agreement to hold the next meeting sometime in early 2020.

Azerbaijan’s Foreign Minister Elmar Mammadyarov addressed the conference, where he mentioned Armenia’s attempts to derail the peace process and Baku’s position on how to resolve it. Mammadyarov blamed Armenian authorities for Yerevan’s attempts at trying to change the ethnic demographics of the region by migrating Armenians into Nagorno-Karabakh and calling them “the people of Nagorno-Karabakh” – what Baku sees as an attempt to force indigenous Azerbaijanis from the region into the shadows.

“Such a position aims at legitimizing the results of the ethnic cleansing, and openly contradicts the philosophy of international human rights law that all human rights are universal, indivisible, interrelated and interdependent and no one can claim for an individual or collective right at the expense of rights and freedoms of others,” Mammadyarov said according to a statement issued on the foreign ministry’s website.

Mammadyarov said Azerbaijan is committed to a step-by-step approach to resolving the conflict, by which Armenia must first withdraw its military forces completely from the occupied region as well as the seven surrounding districts. Subsequently, the roughly one million internally displaced persons must be returned to their homes safely and with dignity. Baku is open to granting the region autonomy, so long as it is within the boundaries and terms of the country’s constitution.

Azerbaijan's Nagorno-Karabakh region and the seven surrounding districts have been under Armenian occupation since the early 1990s. After the USSR collapsed in December 1991, Armenia launched a full-fledged military invasion of the region and occupying it due to its partial ethnic Armenian population that had been living side-by-side with the indigenous Azerbaijani population.

The war resulted in Armenia occupying what amounts to 20 percent of Azerbaijan’s internationally recognized territory, killing 30,000 ethnic Azerbaijanis and forcibly displacing one million. Today, the population of the regions consists of ethnic Armenians only.

During the OSCE gathering, officials also called for settlements to other conflicts that emerged after the breakup of the USSR in 1991.

The European Union’s High Representative and Vice-President Josep Borrell, along with the foreign ministers of Latvia, Norway, Poland and Sweden, as well as the deputy foreign minister of Finland, said European countries should increase efforts and continue to work together for solving such conflicts, seeing it as pivotal for building a new security architecture in Europe.

That is easier said than done. The OSCE Minsk Group has been mediating to find a peaceful end to the Nagorno-Karabakh conflict since 1994, yet the three co-chairs – Russia, the United States and France – has had no luck in getting the two parties to the conflict come to a peaceful settlement.