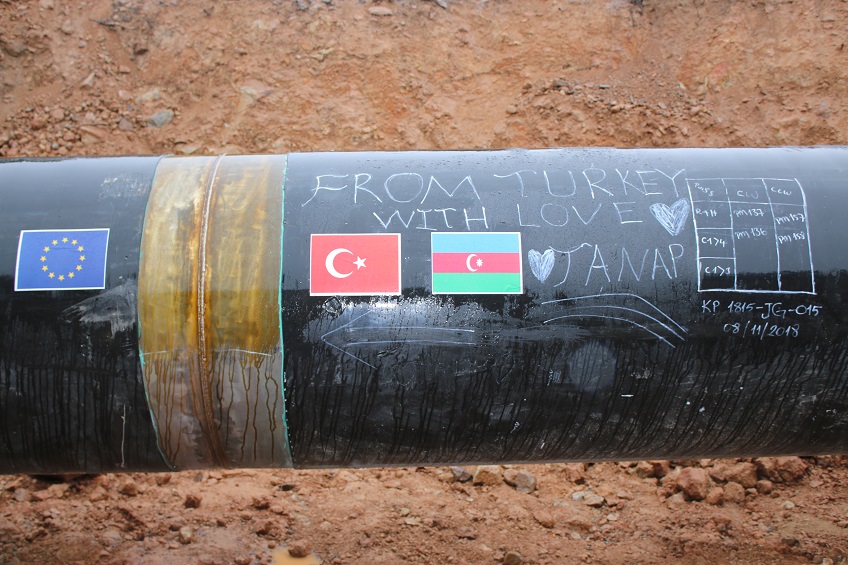 The European Union shifted the gear in search of new alternatives to fossil fuels supplies, particularly natural gas, amidst the deepening energy crisis caused by severed relations with Russia. Russia’s state-run energy operator Gazprom has reduced its exports to Europe causing a deficit in storage and a surge in prices.

The dire outcomes of the ongoing energy crisis pushed Azerbaijan’s years-long reliable energy partnership higher on the EU agenda as the decision-makers in the 27-country organization seek more imports of gas from the energy-rich country.

Türkiye-based Yeni Shafak newspaper recently wrote that the EU leadership plans to increase the capacity of the Trans-Adriatic (TAP) and Trans-Anatolian (TANAP) gas pipelines to reduce dependence on Russian gas.

TAP and TANAP form part of the Southern Gas Corridor (SGC) mega gas pipeline supplying Türkiye and Europe with Azerbaijani gas since the end of 2020. The contracted annual capacity of TAP and TANAP is 10 billion cubic meters (bcm) and 16 bcm per year, respectively. According to the newspaper, it seems technically possible to increase the capacity of TAP from 10 bcm to 20 bcm. At the same time, increasing the capacity of TANAP from 16 bcm to 24 bcm at first and then to 31 bcm is seen as a goal achievable through investment. However, additional protocols and agreements will be required to implement the project earlier than in five years.

The 3,500-kilometer-long SGC pipeline strengthens European energy security, diversifying its energy supplies and boosting decarbonization efforts by providing an uninterrupted flow of Azerbaijani natural gas. The Southern Gas Corridor, defined as one of the world’s most complex and expensive pipelines built to date, is a unique energy route that carries natural gas from the Caspian Sea reserves directly to the European marketplace. The main source of natural gas for the SGC is Azerbaijan’s offshore Shah Deniz field, with an estimated proven reserves of 1.2 trillion cubic meters.

Europe has long been critically dependent on gas supplies from Russia, including its liquefied natural gas (LNG). In 2021, the European Union imported 155 billion cubic metres of natural gas from Russia, accounting for around 45 percent of EU gas imports and close to 40 percent of its total gas consumption.

The war in Ukraine catapulted massive Western sanctions against Russia, who, for its part, tested the durability of Europe without Russian gas supplies in various ways. In July, Gazprom announced that it cannot guarantee gas supplies to the EU countries due to “extraordinary” circumstances. Moscow has also administered a new payment rule urging the European buyers to transfer the amounts in Russian roubles. Later, Moscow cut off gas deliveries to several EU countries, including Finland, Denmark, and the Netherlands, due to their refusal to pay for the gas purchases in the Russian currency.

With an aim to fill in the gap left after the reduction in Russian gas supplies, European Commission President Ursula von der Leyen signed a Memorandum of Understanding on strategic energy partnership with Azerbaijani President Ilham Aliyev in Azerbaijan’s capital Baku in July. The ultimate goal of the agreement is to supply more gas to Europe from Azerbaijan.

Leyen has then announced that based on the document, starting in 2023, Azerbaijan will supply 12 bcm of gas to the European Union, which will be used to compensate for cuts in Russian gas deliveries and contribute significantly to Europe’s security of supplies. By 2027, the total volume of deliveries to the European Union should reach 20 bcm annually, according to her.

The European market now accounts for the largest share of daily gas exports from Azerbaijan. European consumers are supplied with about 27 million cubic meters of Azerbaijani gas per day.

Previously, officials in Azerbaijan revealed the country’s intention to put two new gas fields into operation in response to the growing demand for natural gas in global markets. The new reserves are expected to add a significant portion to the current volumes reaching European consumers.

Azerbaijani authorities have previously confirmed 2.6 trillion cubic meters of proven natural gas reserves, which they believe can supply foreign partners for the decades to come.