Despite Pressure From Washington, Russia To Build Closer Ties With Allies 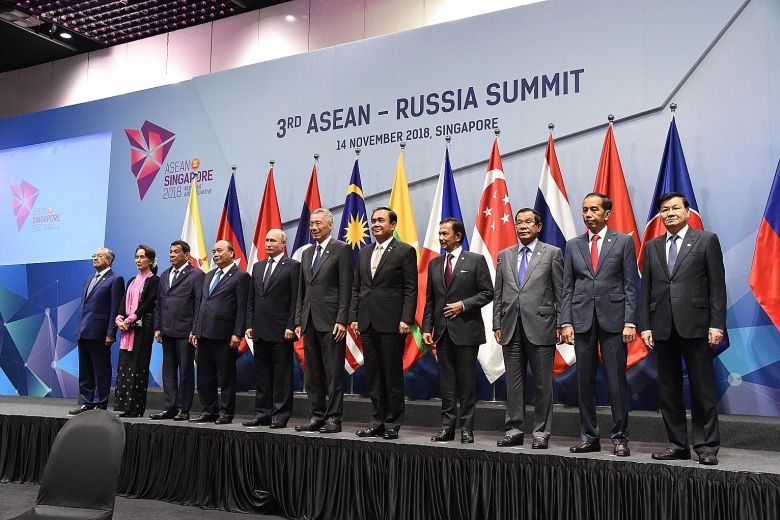 ASEAN consists of the 10 economies of Southeast Asia, namely Brunei, Cambodia, Indonesia, Laos, Malaysia, Myanmar, the Philippines, Singapore, Thailand and Vietnam, which have a combined gross domestic product of about $3.5 trillion.

Washington may have turned the screws on Moscow via economic sanctions over Russia’s actions in Ukraine, the alleged poisoning of a former spy in the U.K., and allegations of meddling in the 2016, but that has not stopped it from strengthening its diplomatic ties with nations in Southeast Asia.

Russia’s President Vladimir Putin recently held bilateral meetings with leaders of regional powers on the sidelines of the Association of Southeast Asian Nations (ASEAN) Summit held in Singapore last week. There, he made clear that Russia will boost economic and military ties with the region.

“This (sanctions) cannot stop development; it is excluded, it is impossible - neither technological development nor economic, therefore cooperation, will continue,” RIA Novosti quoted Putin as saying on November 15.

Putin mentioned in his remarks that trade between Russia and Asian countries is steadily increasing, saying that a quarter of Russia’s trade is with Asia.

Russia’s gross domestic product (at purchasing power parity) is worth over $4 trillion, according to U.S. government statistics.

ASEAN consists of the 10 economies of Southeast Asia, namely Brunei, Cambodia, Indonesia, Laos, Malaysia, Myanmar, the Philippines, Singapore, Thailand and Vietnam, which have a combined gross domestic product of about $3.5 trillion.

Russia established ties with the bloc in 1991, the same year the Soviet Union dissolved. In 2016, the third ASEAN-Russia Summit was held in Sochi along the Black Sea, at which time the two sides adopted the Sochi Declaration, defining the relationship and prospects for economic and social cooperation.

As the world’s fastest-growing armaments market, and with sanctions emanating from the west, Russia has been expanding its relationships with and presence in Asian countries, including exporting arms to Southeast Asia. According to the Stockholm International Peace Research Institute (SIPRI), about 12.2 percent of Russia’s arms exports were sent to the region between 2013 and 2017. A decade ago, that figure was 6.2 percent.

As China builds up its presence in the South China Sea, and with growing concerns over terrorism in the region, Southeast Asian countries are keen to build up their domestic defense capabilities, which translates into business for Russian weapons manufacturers.

Indonesia has been holding talks with Moscow for the purchase of the Russian-made fighter jet known as Sukhoi Su-35. In 2017, Vietnam bought six Russian-made submarines, and the Philippines had imported arms from Russia that same year. In addition, Indonesia's state-owned oil company Pertamina and Russia's Rosneft are jointly working on building a refinery, for which investments are expected to surpass $8.8 billion.

Russia’s growing ties with Southeast Asian countries come at a time when Washington’s bilateral relations with Moscow are tense, with no signs of easing. U.S. President Donald Trump’s decision to skip the summit this year has, in turn, raised concerns about how much he cares about the Asian Pacific region.

“Every country in Southeast Asia is trying to forge a close relationship with the U.S. - they don’t want to live in a region that’s dominated by China,” Brian Harding, deputy director of the Southeast Asia program at the Center for Strategic and International Studies in Washington told The Washington Post on November 12, commenting the Trump’s absence.

Harding says that the leaders of ASEAN countries are interested in various options – not just cozying up to Russia – to find the right balance.

“It doesn’t send a good signal (of U.S. commitment) that the president doesn’t want to attend the one summit he’s supposed to in Southeast Asia,” Harding said.

However, Dane Chamorro, a senior partner at the strategic consulting firm Control Risks, is more optimistic.

“I think if you actually want to get things done and actually want to send serious messages to people, (Pence) can do that very, very well,” Chamorro told CNBC on Wednesday, referring to the U.S. Vice President Mike Pence, who was sent in Trump’s absence.