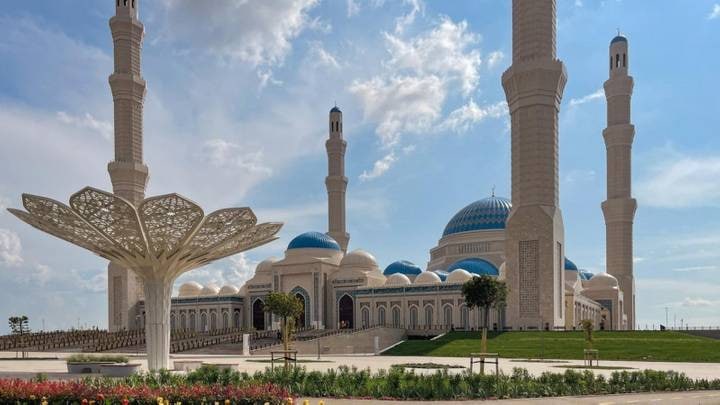 Nur-Sultan Mosque has already been ranked one of the world’s ten largest mosques, with the total capacity of 235,000 worshippers.

“On this holy Friday, we are opening a beautiful mosque in our capital city,” Nazarbayev said at the opening ceremony in the capital city, Nur-Sultan. “This is an important event not only for our capital city but also for all our citizens, Muslims.”

Nazarbayev, who ruled Kazakhstan for three decades since the country gained independence in 1991, laid the foundation stone for the mosque the day before his resignation in March 2019.

During his speech at the opening ceremony, the former president noted that many new buildings have been built in the capital since the country became independent.

“With independence, we are opening mosques in all regions of the country. May Allah hear all the prayers recited in these mosques,” Nazarbayev said.

Nur-Sultan Mosque has already been ranked one of the world’s ten largest mosques, with the total capacity of 235,000 worshippers. The total area of the land plot on which the mosque stands is ten hectares, while the total area of the holy place itself is more than 68,000 square meters. The height of its main dome is almost 90 meters, while its minarets rise at a height of 130 meters.

The new mosque is three times bigger than the former largest Hazret Sultan Mosque also located in the Kazakh capital. With a population of slightly more than 19 million, Kazakhstan is a Muslim-majority country, with over 72 percent of the country’s overall population following Islam. More than 2,300 mosques are registered across the country. Less than 25 percent of the population of Kazakhstan is Christian, including ethnic Russians, Ukrainians, and Belarusians.