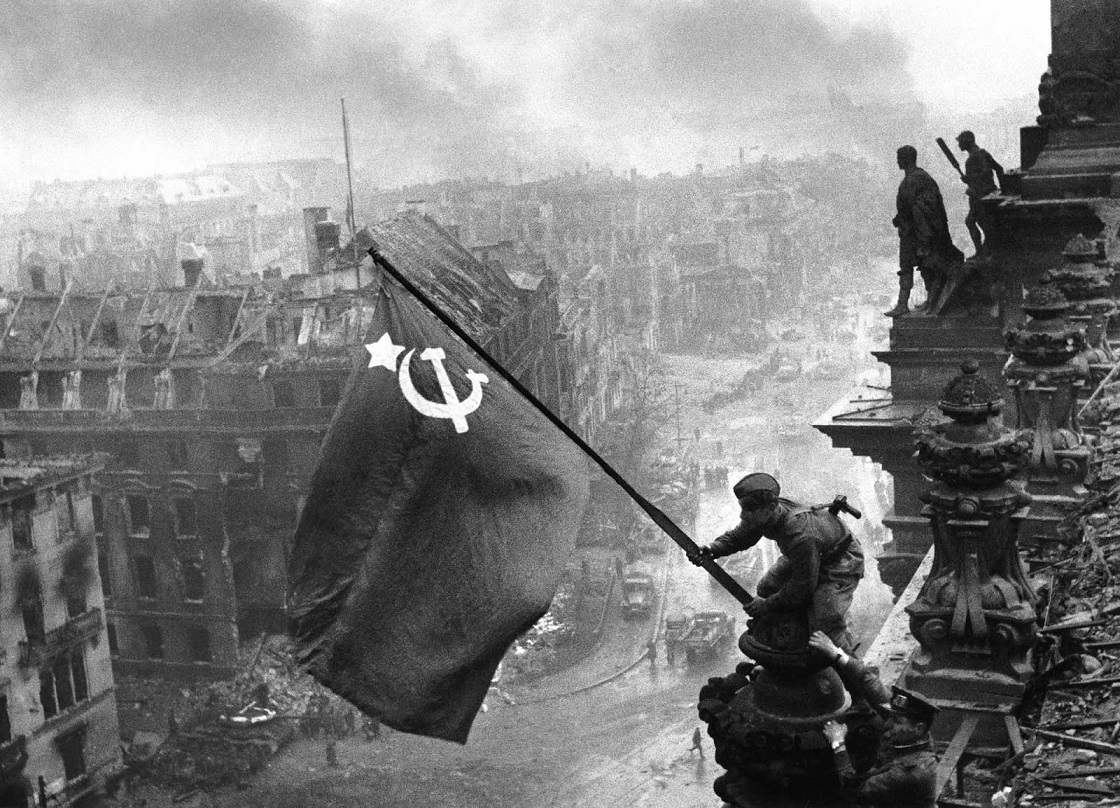 Soviet soldiers raising the Soviet flag over the Reichstag, May 2, 1945 / Yevgeny Khhaldei

The end of one of the 20th century’s most horrific wars, which claimed the lives of 60 million people between 1939 and 1945, occurred 73 years ago today – a day celebrated throughout Europe and known as “Victory Day.” The Soviet Union witnessed some of the worst horrors of World War II. Known as the Great Patriotic War in the Caspian region, the war is remembered as the Soviet defeat of Adolf Hitler’s fascist movement.

The modern-day states that comprise the Caspian region made unique contributions to the effort to defeat Hitler. Caspian News reflects on those efforts here, detailing efforts by citizens in Azerbaijan, Kazakhstan, Russia and Turkmenistan.

From manpower to defense assets; from the energy, agricultural and mining sectors, Azerbaijan played its unique role in defeating Germany. Around 700,000 Azerbaijanis were dispatched to the frontlines during the war, with nearly half of them never returning home. The 77th, 223rd, 271st, 402nd and 416th frontline divisions of the Soviet army each consisted of Azerbaijani soldiers. The 416th division reached Berlin, from its home in the Caucasus.

Between 75 and 80 percent of oil and 85 to 90 percent of gasoline were supplied by Baku to Soviet frontline units, making Azerbaijan’s contributions to Soviet success indispensable. From 1941 to 1945, the units received 75 million tons of oil and 22 million tons of gasoline. The Azerbaijani chemist Yusif Mammadaliev organized the production of 38 types of fuel, eight types of diesel, and various compounds of gasoline for nine types of aircraft. Baku is reported to have produced 10,000 Molotov cocktails per day. Mammadaliyev and his team invented the strategic high-octane jet fuel B-78. The soviet army has got over a million ton of B-78 fuel throughout the war.

More than 130 types of weapons and spare parts were produced throughout the war years, including the Katyusha rocket, the Shpagin machine gun and the Yak-3 fighter jet. Ships and submarines were repaired at shipyards and tanks at factories, at a time when farms churned out 500,000 tons of cotton.

In 2015, the Heydar Aliyev Foundation released a documentary titled “Target – Baku,” which was dedicated to the 70th anniversary of the Great Patriotic War victory. The film examines the role of Azerbaijanis and the importance of Baku’s oil reserves to the Soviet Union in defeating the Nazis.

Shortly after Nazi Germany invaded the Soviet Union in 1941, Kazakhstan mobilized its economy to play its part in the war effort. When Nazi armies threatened to capture Soviet industrial centers located in Russia close to eastern Europe, the Soviet Union made sure to relocate specific assets to Kazakhstan. While Kazakhstan operated only six military-oriented plants and specialized factories before the war, after 1941 the figure jumped to around 300.

Over the four years of the war, industrial production in Kazakhstan increased by 37 percent. Kazakhstan topped the list of lead producers, by manufacturing 85 percent of Soviet lead. Nine out of ten bullets were made with lead produced in Kazakhstan during World War II. “As an infantryman, I felt that the country began to get the lead in a sufficient amount – from now on we were free to use our ammunition,” recalls Boris Berdnikov, a war veteran.

The famous 316th Rifle Division, which had been launched in Almaty - then the capital of the Kazakh Soviet Socialist Republic - became one of the most famous, after taking part in the Battle of Moscow. Soviet newspapers later reported that 28 soldiers from the division’s 1075th Regiment destroyed eighteen enemy tanks while fighting to the very end.

Russia celebrates Victory Day each year, recalling not just the end but the beginning of the Great Patriotic War, which began on June 22, 1941, when German Nazi forces hit the USSR in a biltzkrieg, or “lightning war.” With the attack, Hitler surprised Stalin, as the former violated the Molotov-Ribbentrop treaty signed between Germany and the Soviet Union in 1939, which had ensured that neither country attacked the other.

Although one million German soldiers and their allies have achieved a series of victories, the Battle of Stalingrad, fought between 1942 and 1943, fundamentally changed the course of Germany’s fate in Soviet Union. The battle is remembered as the bloodiest, haven taken the lives of somewhere between 800,000 and 1,600,000 people.

Over the course of the entire war, the USSR lost nearly 27 million people, and the greatest number of casualties were Russian, with 21 million. The Soviet Union spent over $93 billion on the war effort.

The end of World War II is commemorated every year in Russian towns and villages to honor the memory of those who gave life for their country. A military parade is held every May 9 in Moscow's Red Square to mark the anniversary of the Soviet Union's victory, as well as showcase the newest military equipment produced by Russia.

In 2000, by a decree signed by the late President Saparmurat Niyazov, all Turkmenistani victims of the war were declared National Heroes. Nearly 740,000 soldiers from the country fell in the battlefields.

To commemorate Victory Day, musical concerts are held in parks, including Altyn Asyr Park, and festivities kick off at the National Cultural Centre’s Palace of Mukams.