By Aygul Ospanova and Katayoun Ebrahimi and Nazrin Gadimova August 22, 2018 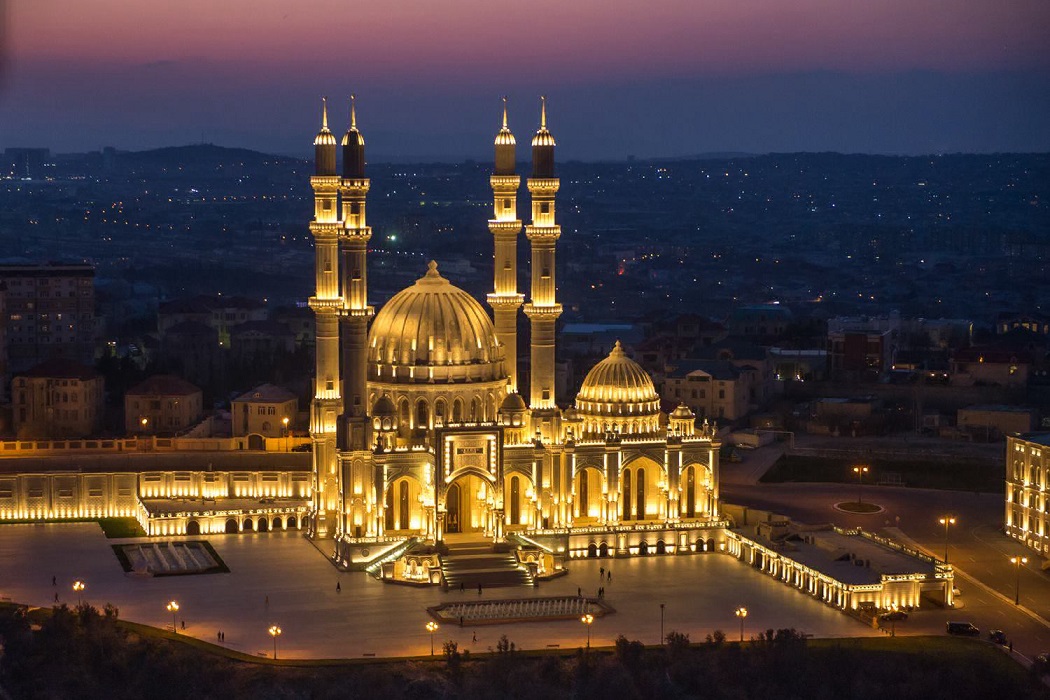 Millions of Muslims living in the Caspian region are celebrating one of the holiest days in the Islamic lunar calendar, namely Eid al-Adha, which is one of two annual Eid celebrations celebrated worldwide.

Eid al-Adha, or the Feast of Sacrifice, is centered on the story found in the Koran where God tests the loyalty of the Prophet Ibrahim, by asking him in his dream to sacrifice his only son as a sign of his faith. When Ibrahim was about to sacrifice his son on Mount Moriah, Allah stopped him, and sent a ram as a reward for his willingness to comply.

The Feast of Sacrifice in Azerbaijan runs from August 22 to 23, pursuant to a testimony, or fatva, from the Caucasian Muslims Office – the main religious institute that coordinates Islamic activities in the country. Although Azerbaijan is constitutionally secular, it is home to nearly 10 million people, 97 percent who are Muslim.

The date when Eid al-Adha, nicknamed the “Big Eid,” starts off depends on the lunar calendar. This method of calculation drifts the date approximately 11 days earlier each year according to the Gregorian (solar) calendar. Eid al-Adha falls on the 10th day of Dhu al-Hijjah on the Islamic (lunar) calendar, during what is the 12th and one of the most sacred months of the Islamic year. During this month, the sacred Hajj pilgrimage to the holy city of Mecca in Saudi Arabia takes place.

The holiday is centered on the purchase of and nurturing an animal, which is slaughtered in anticipation of a big feast. Mosques are filled with worshippers, who pray the God while showing their loyalty and seeking blessing from Allah. Friends and families come together to sacrifice an animal, exchange gifts and eat traditional foods.

The meat from the sacrificed animal is traditionally divided into three parts and shared with family and relatives, neighbors and the needy. Azerbaijani Muslims divided the meat into seven portions. The family who slaughters the animal sends the meat to seven “doors,” or houses, including that of relatives, neighbors and poor people – the last of whom tend to receive more than the others.

Muslims in Turkmenistan, which account for 89 percent of the country’s overall population, will celebrate “Big Eid” this year from August 22 to 24, following a decree by the president. Traditional entertainment during Eid consists of riding on a swing, which according to a nationwide belief helps getting rid of sins.

Kazakhstanis have been celebrating Eid al-Adha since the Middle Ages, ranging from the 10th to the 13th centuries A.D., when Islam spread throughout Central Asia. In modern-day Kazakhstan, Eid al-Adha, or Kurban Ait, unites not only Muslims but representatives of other faiths as well, as thousands attend public festivities, charity fairs and musical concerts. Throughout the three days, Kazakhstanis visit each other and exchange gifts and treats, similar to what takes place in other Muslim countries.

Serikbai kazhy Oraz, the Deputy Chairman of the Spiritual Administration of Kazakhstan’s Muslims, believes Eid al-Adha is considered the holiest feast for all Muslims, along with Eid al-Fitr, which is the Islamic holy month of fasting.

“For many centuries, our people have been waiting for this holiday with trepidation, so they pay a special attention while preparing to celebrate it. On this day, all relatives and friends visit each other to express their warm wishes and blessings,” the supreme mufti of Kazakhstan said in his video message on YouTube.

Meanwhile, nearly 3,000 pilgrims from Kazakhstan have already arrived in Saudi Arabia, according to data provided by SCAT and Fly Nas air companies. Following the pillars of Islam, they must ascend Mount Arafat, where they must stand before sunset. Standing on Mount Arafat, where the Prophet Muhammad and the founder of Islam is said to have delivered his last sermon, is the culmination of Hajj.

Although Russia is considered the only non-Muslim majority country in the Caspian region, there are an estimated 30 million Muslims living there, or 20 percent of the country’s population. Early in the morning of August 21, more than 250,000 Muslims in Moscow are expected to gather in the city’s mosques and specially prepared areas to mark the start of the four-day holiday.

The Moscow Cathedral Mosque, considered the biggest mosque in Europe and Russia, is expected to receive 130,000 Muslims throughout the four days. The mosque underwent a $170 million renovation project in 2015, when it was expanded to accommodate 10,000 people at a time.

Moscow’s local authorities assist Muslim religious organizations each year to host religious festivities, and this month’s Eid is no different. Specially designated places allocated for temporary use, such as Pavilion №2 in Sokolniki Park, a football field located in the Brateevsky cascade park, and a section in the Butovo forest park area, will all have police and security to ensure the safety and security of the areas.

As the Caspian’s only officially Muslim country, Iran marks Eid al-Adha with prayers called the Namaz Eid at local mosques and on open grounds. In keeping with the holiday’s tradition worldwide, cattle, camels, sheep and other livestock are slaughtered and the meat is distributed to family, friends and the poor. Portions are split equally between the different groups.

In Iran the holiday is sometimes called ‘salty Eid’ for the food that is normally consumed. Many are savory, made with beef or mutton (sheep), and used in dishes like kebab and haleem, a stew made of wheat or barley and meat. Along with the meat dishes, Iranians eat baghali – rice with fava, broad beans and dill.

Eid is a national holiday in Iran, and a time when people ask for forgiveness from others if they did something offensive or wrong.