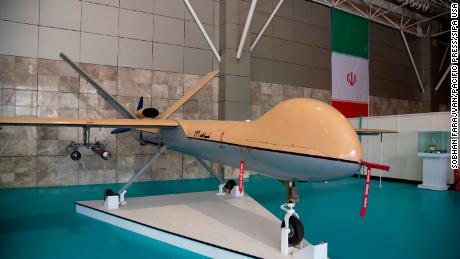 An Iranian Shahed-129 drone on display at IRGC aerospace fair in western Tehran on June 28, 2021. The Shahed-129 and Shahed-191 are reportedly the models Iran began showcasing to Russia in June. / ISNA

“Today, big countries have the purchase and use of the military production and achievements of the Islamic Republic of Iran on their agenda, including that of advanced drones. And this is considered a big source of pride for our dear nation in this era,” Iranian Students News Agency quoted a statement on August 22.

On August 15, Iran’s Islamic Revolution Guards Corps (IRGC) launched a two-week-long drone competition in Kashan, in the central province of Isfahan, with teams from Russia, Belarus, and Armenia among participants. Dubbed the “Falcon Hunting Drone Games,” this event aims to display the performance of various unmanned aerial vehicles (UAVs).

Ali Balali, the top adviser to the IRGC aerospace chief and the tournament’s spokesman, said that the competition would be judged based on performance and consistency in aerial reconnaissance during both day and night, in addition to how the UAVs could help guide precise artillery fire.

The competition comes as the US has been warning that Russia is planning to buy Iranian drones.

On August 10, a US official told CNN that “Russian officials conducted training in Iran as part of the agreement for UAV transfers from Iran to Russia, in the last several weeks.” The official also said that intelligence about the training had recently been declassified. However, Kremlin spokesperson Dmitry Peskov said last month that Russia had “no comments on the matter” when asked by reporters about the drones.

Drones have played an integral part in the war between Russia and Ukraine for both sides. In early August, a Ukrainian presidential adviser, Oleksiy Arestovych, said that the Russian army was using Iranian-made UAVs, adding that Iran already supplied Russia with 46 drones.

US National Security Adviser Jake Sullivan said on July 11 that it was unclear whether Iran had already provided any of the unmanned systems to Russia to use against Ukraine. He then added that “our information indicates that the Iranian government is preparing to provide Russia with up to several hundred UAVs, including weapons-capable UAVs on an expedited timeline.”

On July 19, the commander of the Iranian Army’s Ground Force, Kioumars Heydari said Tehran was ready to export arms and military equipment, including unmanned aerial vehicles (UAVs), to “friendly countries.”

In mid-May, Iran opened a drone factory in Tajikistan to manufacture the Ababil-2 tactical surveillance drone with an operational range of 100 km.

Tehran began drone development in the 1980s during the Iran-Iraq war. Despite crippling sanctions imposed on Iran over its nuclear and missile programs in recent years, the country has managed to produce and field a vast array of military drones used for both surveillance and attack, according to an analysis by experts.